The X-Men meet Colossus and track down Juggernaut, the one responsible for trashing their mansion. 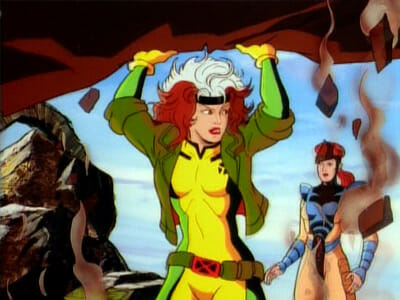 Rogue and Jean search the wreckage for the Professor

Picking up from the previous episode’s cliffhanger, the X-Men return home to find their beloved X-Mansion in ruins. The team heads out and searches the wreckage for the Professor, but instead of finding him, they find a recording he made saying he was going out on a trip.

Professor X auditions for the role of Zordon in Power Rangers

Wolverine finds a pair of huge-ass footprints in the rubble, picks up their scent, then runs off. “The Professor wants us to work as a team,” Cyclops says in his trademark complainy voice, but Wolverine is already out of earshot. Cyclops orders Storm, Rogue, and Jubilee to follow Wolverine and provide back up.

Storm and Jubilee chauffeured by Rogue

Rogue drives Storm and Jubilee to the city and they split up to search for Wolverine. Jubilee finds him first, along with a bunch of angry construction workers who believe mutant Piotr Rasputin (Colossus) is using his super strength to steal their jobs.

Colossus in his metal form

Thinking Colossus is responsible for the mansion’s demise, Wolverine picks a fight with him, but the confused Colossus easily holds his own, then leaves. 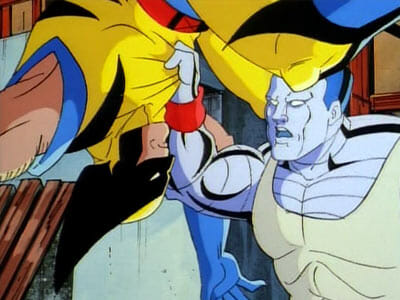 Jubilee and Wolverine head to a nearby bank after getting a call from Rogue on a huge cell phone – “somebody big” has robbed a nearby bank. They see a still confused Colossus being taken into custody. The bank must be really close to the construction site for Colossus to already be in custody, considering he only just left it. 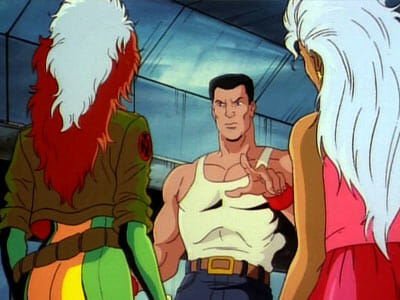 Rogue and Storm break Colossus out of jail

But did he really rob the bank? Wolverine doesn’t think so, especially after hearing Colossus’ plea that he tried to stop the real robber. Storm and Rogue break him out of jail (and say hi to Beast, who was conveniently in the neighboring cell), while Wolverine and Jubilee run into the real bank robber – Juggernaut, a huge armored guy, who’s only been robbing banks to get the attention of his stepbrother, Professor Xavier. 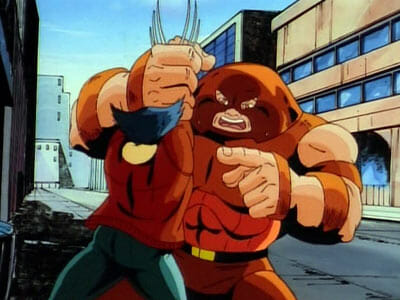 Wolverine and Jubilee try to fight Juggernaut, but he’s too strong for them to handle alone. It takes the arrival of Colossus and the rest of the X-Men working together as a team for Juggernaut to be defeated. After Rogue removes Juggernaut’s helmet, Jean uses her telepathy to give him temporary amnesia and render him harmless…for now.

At the end of the episode, we see Colossus helping the X-Men rebuild the mansion. Wolverine invites him to join the team, but Colossus turns it down, “I must first find my sister,” he says. 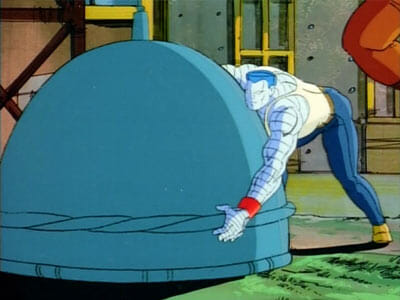 Not bad. “Teamwork” was obviously the theme of this episode, as it’s constantly hammered at us, but I enjoyed the action scene at the end with each X-Man working together to take down Juggernaut.

This episode introduces Colossus and Juggernaut, but otherwise felt very fillery. Like the Morlock episode, it doesn’t really gel with the rest of the season arc. Bank robberies aren’t really up the X-Men’s alley. 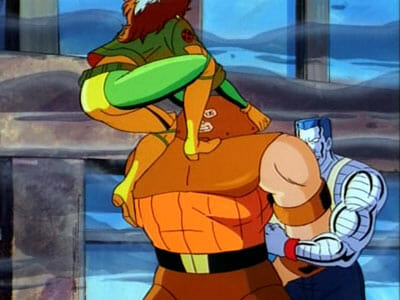 Juggernaut himself doesn’t have a lot of depth, as he’s just a big bully for the X-Men to fight, though he and his relationship with Xavier does get explored in a later episode. Almost every one of Juggernaut’s lines is a quip or pun, and while that could get old really fast, I thought a lot of them were pretty amusing – on Jubilee: “What’s she gonna do? Hit me with her diaper?”