Storm, Gambit, and Jubilee find themselves in a mutant slave labor camp. 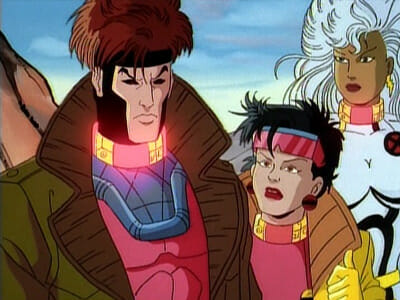 We follow up on the Genosha storyline from the previous episode. Storm, Gambit, and Jubilee have gone to the seemingly mutant friendly island Genosha for vacation, but find it’s all a sham and are captured. They, and the rest of the imprisoned mutants who fell for the ruse, are fitted with collars that inhibit their mutant abilities and are forced into labor, working on dam construction. 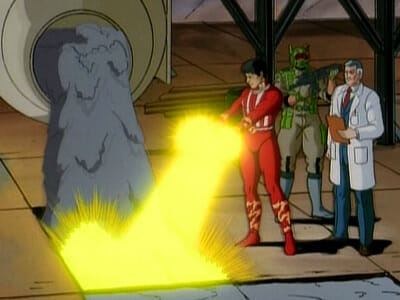 The captors are none other than Gyrich and Trask (from Night of the Sentinels), who are working with Genosha’s appropriately named leader, Leader. Cameron Hodge is also involved with this group’s activities – he was Beast’s lawyer a couple episodes ago.

The reason they want the dam built is to provide power for Master Mold, a massive Sentinel able to build Sentinels on its own – essentially, he’s a mobile Sentinel factory. 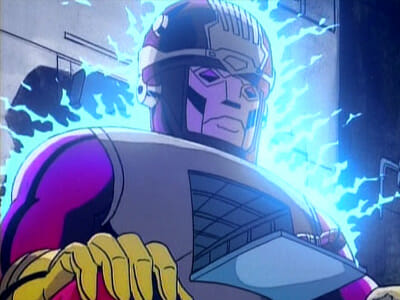 Storm foolishly tries to escape right after the guards explain how the collars neutralize mutant abilities. She is immediately caught by a Sentinel and thrown into solitary confinement (remember, Storm is claustrophobic). 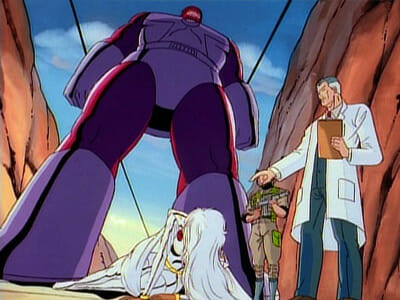 A Sentinel puts an end to Storm’s escape attempt

The next day, Jubilee gets some fellow mutants together to jump the guard in charge of the control collars. Gambit tattles to the guards and Jubilee’s plan fails; she gets locked up in “the box” next to Storm. 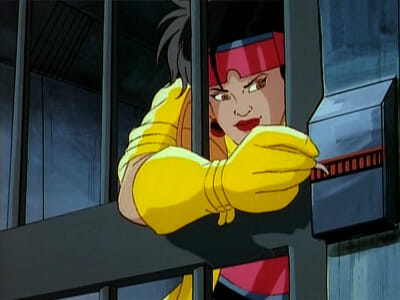 Jubilee picks the lock of her cell door

While being escorted back to his cell, Gambit ditches his guards and escapes. He runs into a man named Cable who has his own agenda against Leader. Cable just happens to have a key that unlocks the collars, which he hands off to Gambit. 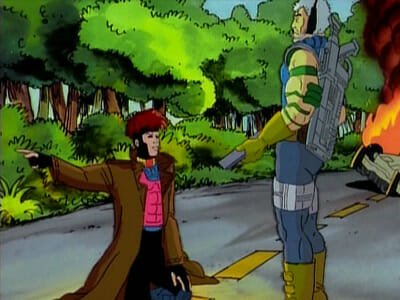 Gambit breaks Storm and Jubilee out of isolation and removes their collars. Together, they free the rest of the mutants and fight off all of Genosha’s Sentinels and guards, then destroy the dam. The rest of the X-Men arrive – concerned because they lost contact with Storm and the others – and lend a hand. 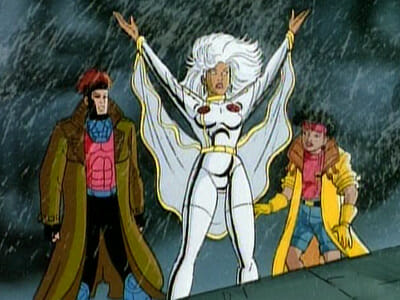 Storm is now free to unleash her power

During the chaos, Cable confronts Leader and Cameron Hodge. They, and the Sentinel factory, are flooded.

Later, all the X-Men head home on the Blackbird but find the X-Mansion in ruins. 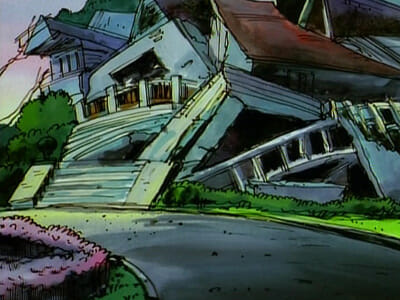 The X-Mansion has been destroyed

I really like this episode. It was nice seeing the trio of Gambit, Jubilee, and Storm away from the rest of the team, fending for themselves. Jubilee especially shows some growth here by being the one to spearhead the escape attempt.

The only thing I didn’t really like in this episode was Cable. This badass guy shows up out of nowhere and steals screentime from the other characters with his random side plot. Furthermore, this weird backstory he has with Leader isn’t brought up again after this episode. Damning of all is his role as deus ex machina in giving Gambit the key to the collars. How convenient. 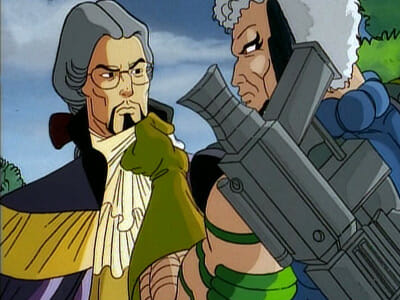 Instead, Gambit should have used his thieving skills to pickpocket the key from a guard before his escape from custody. Gambit would look good and his escape plan would make sense. Otherwise, what was he going to do if Cable didn’t show up with the key?

Fun fact: The next episode was still in production when it was supposed to air and had to be skipped, causing this one to have an alternate ending when first aired, with the mansion still intact.