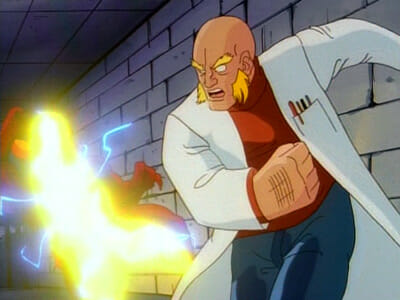 We start the episode in the X-Mansion, with Sabretooth still in the care of the X-Men. Professor Xavier uses his telepathy to enter Sabretooth’s mind in an attempt to rehabilitate him, and literally fights his inner demons. Xavier starts to make some progress, until a Wolverine-looking demon appears and scares Sabretooth deeper into his mind.

The Professor halts the rehabilitation when an alarm sounds – Magneto is attacking a chemical plant. The Professor heads over there in the Blackbird with Cyclops, Rogue, and Storm, leaving Sabretooth in the care of Jubilee. 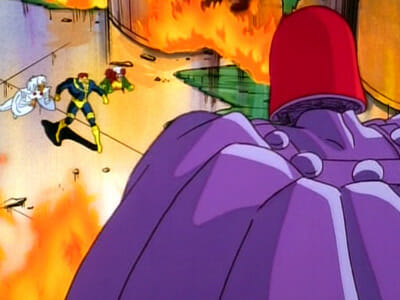 The X-Men once again face Magneto

The battle begins, and the X-Men don’t fare well against Magneto: Storm gets buried under a ton of bricks and freaks out (she’s claustrophobic), Cyclops succumbs to chemical fumes and falls unconscious, and Rogue absorbs his laser eyes when she gives him CPR (incorrectly, I might add) and starts blasting everywhere she sees.

It takes the Professor to defeat Magneto, by forcing him to relive a traumatic childhood memory. Magneto retreats and the Professor guides the rest of the X-Men to safety. 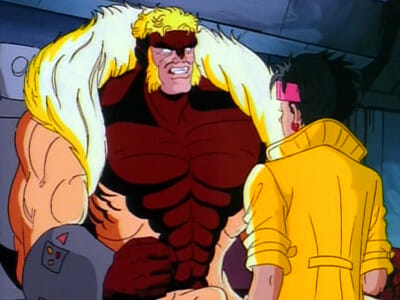 Meanwhile, back at the mansion, Sabretooth complains about his wrist restraints being too tight. The ever gullible Jubilee releases one of the restraints, falling victim to his trap, and becomes a hostage. Wolverine rescues her, and together they finally drive Sabretooth away.

The episode ends with Professor Xavier apologizing to the wounded Wolverine, who lies in the infirmary following the battle, that he should have listened to him. 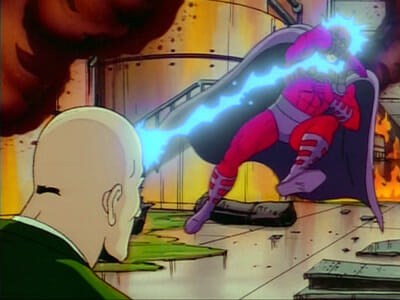 This episode was good, but not very rewatchable. The chemical plant battle is a bit boring and seemed like a retread of the military base confrontation in the last episode.

So apparently Sabretooth was working for Magneto the whole time and his job was to sabotage the mansion. That’s weird, those two working together. Especially since Magneto makes no mention of it.

Interesting that Magneto’s helmet doesn’t protect him from the Professor’s mental abilities – that concept was introduced later in the films.