X-Men Adventures was a series that provided adaptations of X-Men: The Animated Series episodes in comic form; it was a comic adaptation of a cartoon adaptation of a comic. But instead of following the scripts verbatim, X-Men Adventures presented a sort of expanded version of the episodes, with additional dialogue and scenes. Later issues of the series, retitled Adventures of the X-Men, started doing original stories in the animated series continuity. 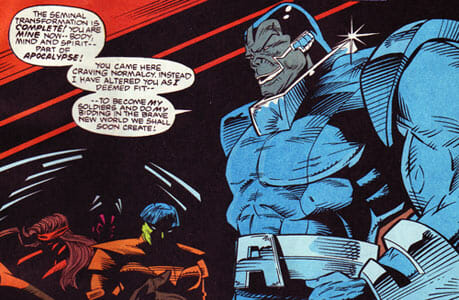 This issue presents the second half of the Apocalypse story as seen in the X-Men cartoon. We start in Dr. Adler’s lab, where Apocalypse finishes converting the mutants he selected into becoming his Four Horsemen.

Elsewhere in the X-Mansion, we see Rogue, Jubilee, Jean, and Gambit play pool. In X-Men Adventures, by the way, Jean’s costume coloring looks closer to her counterpart in the regular X-Men comic line, and she doesn’t have the weird ponytail thing she does in the cartoon. 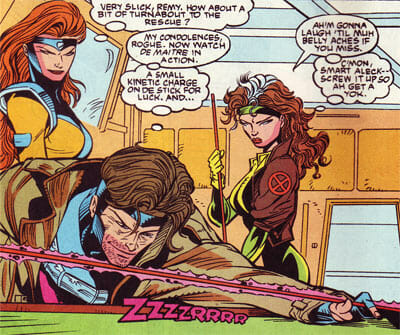 Storm enters the room and tells everyone the Professor wants them to turn on the television, and we see a news broadcast of the world peace talks in Paris where Apocalypse and his Horsemen suddenly attack.

As in the cartoon, Professor Xavier assigns Rogue to look into Adler. Instead of looking like an old Dr. Wily-esque scientist in the cartoon, by the way, Adler looks much more generic. 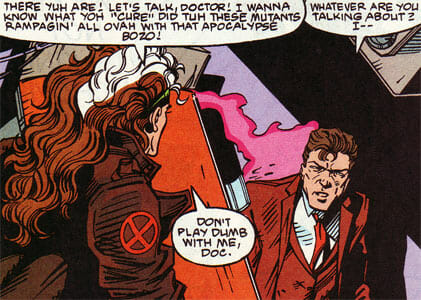 Unlike the cartoon episode, the X-Men don’t have a fight scene with the Horsemen in Paris, which actually makes sense considering it would take the Blackbird several hours to fly from New York to Paris. Instead, they track (through unspecified means) the Horsemen straight to their base at Stonehenge.

Rogue also doesn’t get her brief fight scene with Apocalypse, as she’s tossed aside by Apocalypse as soon as the X-Men arrive. 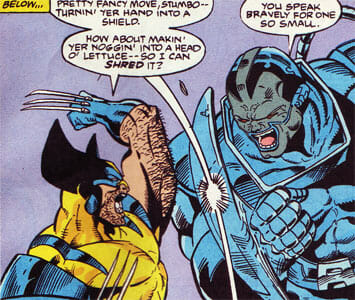 As in the cartoon, Rogue uses her touch to dispel Archangel’s brainwashing, then Apocalypse retreat with his remaining Horsemen. But unlike the cartoon, we get a couple additional scenes at the end after Archangel flies off. 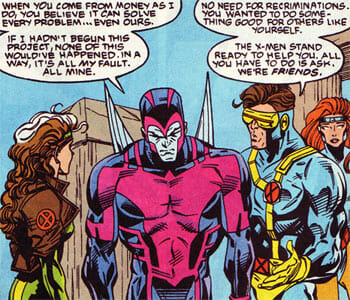 In the first, Xavier chats with Rogue about all that happened with the fake cure and provides words of comfort. The second scene shows Archangel retreating to his cabin in Switzerland reflecting on how he’s changed and that Apocalypse is still out there as a looming threat. “I don’t believe anyone’s ever been as alone as me.” 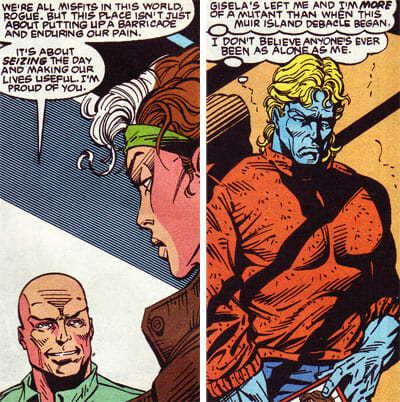 Scenes that weren’t in the cartoon

As an adaptation, this was fine. The additional dialogue and additional (or truncated) scenes provided a different enough experience than watching the cartoon. However, I wouldn’t recommend going out of your way to read this comic if you already have the episode handy.

The artwork was fine. Characters were very expressive, but looked a bit off at times and had pointy faces, particularly during the pool table scene. I’ll chalk that up to the style of 90s comics.

Morph was a fan favorite character, making his debut in the first episode of the cartoon just so he could be killed off. The writers resurrected him for the show’s second season, but it was a move not welcomed by everyone, as fan Jason writes in this comic’s letter pages: “One thing I don’t particularly care for is the fact that Morph is coming back into the picture. It’s not that I don’t like him, it’s just that you could do more good by bringing in a different mutant.”

Jason also talks about rumors of an X-Men movie being produced (which wouldn’t happen for another 7 years): “I know it would be a big hit if a good budget was provided for the film; none of that B movie stuff.” 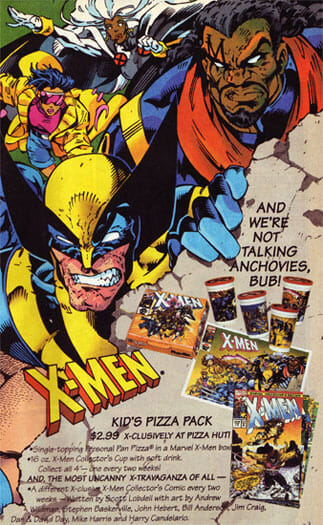 Here’s an ad for an X-Men Pizza Hut promotion