A picnic cruise gets off to a bad start when the Scooby gang and the Globetrotters accidentally board a ship bound for Haunted Island. 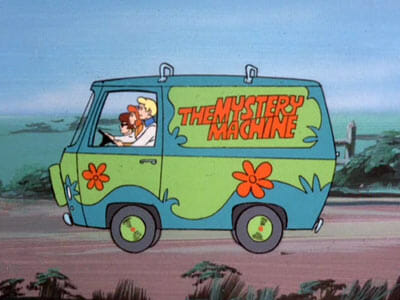 The Mystery Machine runs out of gas

The episode opens with the gang in the Mystery Machine driving to a port, hoping to catch the ferry for Picnic Island. In the backseat, Scooby gets into the picnic basket and eats all the food. Dick move, Scooby. Dick move. Surprisingly, everyone takes this rather well. 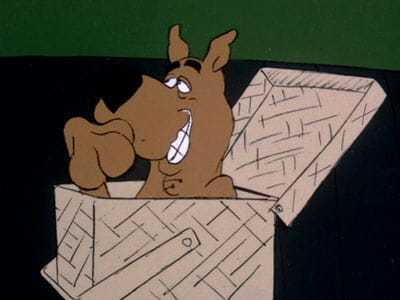 How does he do that?

Just as in Spooky Space Kook, the Mystery Machine runs out of gas and the gang explores a nearby shack for resources. Only this time, they find the Harlem Globetrotters. This is the Globetrotters’ third appearance in this show; it’s almost as if their destiny is intertwined with the Scooby Gang. 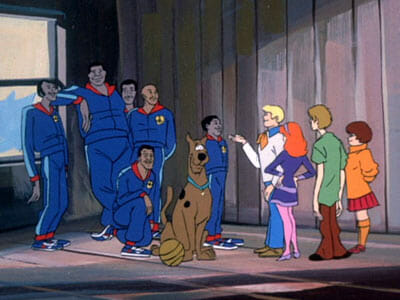 The Scooby gang meets up with the Globetrotters once again

Anyway, the Globetrotters explain they’re in town for a game they’ll be having against the Ocean City Scorpions. They figured the abandoned shack would make a good place to rest and practice. Velma invites the Globetrotters to join her and the rest of the Scoobies for their trip to Picnic Island, but as they all leave, mischievous eyes watch through the wall… 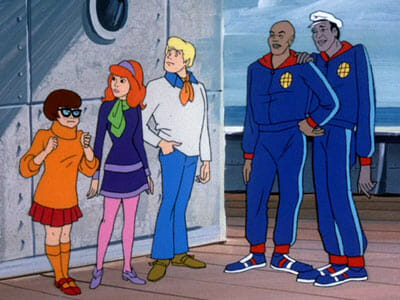 When the Scooby gang/Globetrotters reach port, a mysterious individual moves a sign and tricks them into boarding the wrong boat – one destined not for Picnic Island, but Haunted Island! By the time everyone realizes this, it’s too late and another mysterious person (or perhaps the same one who moved the sign) unties the boat from its anchor. 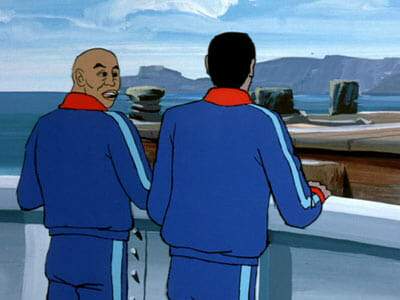 Meadowlark assumes command of the ship, but because the rest of the Globetrotters are incompetent bumblers, they accidentally knock the ship’s wheel overboard. To further complicate matters, Daphne finds disembodied hands in the bowels of the ship controlling a second ship’s wheel, ensuring the boat makes it to its destination. 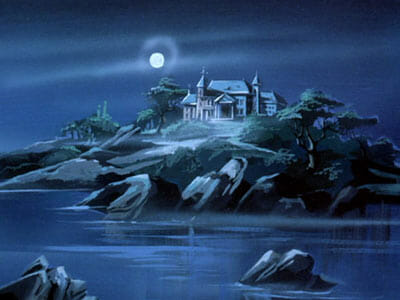 By nightfall, the boat arrives at Haunted Island and more weirdness descends on our heroes. They try to recuperate in a mansion, but a ghost, floating books, disembodied knitting, and haunted statues proceed to terrorize them. 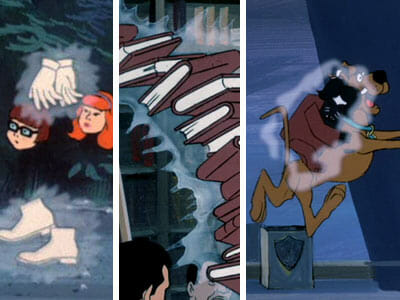 Outside, the Scooby/Globetrotter gangs find cult-looking guys having a secret meeting. They’re unmasked and revealed to be the managers of the Scorpions! Their aim was to spend the whole night scaring the Globetrotters so they’d be exhausted from lack of sleep during game day and lose the game. The coaches for the Scorpions are unmasked

We jump ahead to the next day’s game, and as the Scorpion managers planned, the Globetrotters perform poorly due to exhaustion. During a break in the game, Shaggy and Scooby help them out by giving them ice to put in their pants to wake them up. It works and they win the game. 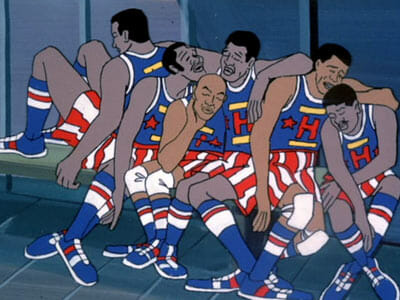 The Globetrotters are too tired to play

The second season of The New Scooby-Doo Movies opens with a third guest appearance by the Harlem Globetrotters, giving them the distinction of being this show’s most frequent guest star(s).

Their inclusion in this episode was better executed than in their last appearance, and brought their basketball skills to the forefront (but not as obnoxious as in their first appearance). However, the Globetrotters were also responsible for this episode’s most tedious gag, where all of them, save for straight man Meadowlark, took everything literally.

Curly was also the butt of a lot of bald jokes, but those were a bit more funny. 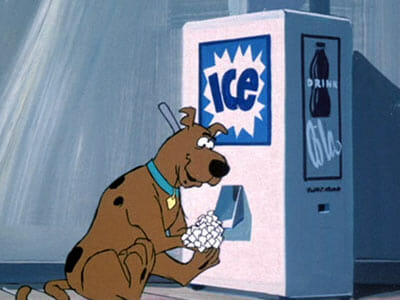 A lot of strange, but entertaining things happened on Haunted Island that weren’t explained or directly attributed to the Scorpion managers. Perhaps Scooby-Doo’s first foray into the actual supernatural?

On the technical side, the artwork was really weird in this episode. Very sketchy and rough (mainly in the first few minutes). Was the episode rushed or did the clean up artist call in sick? 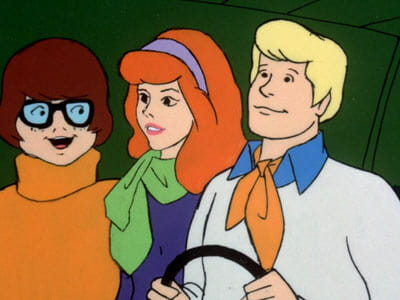 Some frames needed cleaning up

Overall, this was probably one of the better installments of the Scooby Movies series. The filler was less noticeable and it had an interesting twist at the end: despite the Scooby gang’s efforts, the villains actually won and got away with it.

In fact, I wonder if the presence of the Scooby gang and their invitation to the Globetrotters to join them is what handed the villains their victory. After all, had the Scooby gang not come along, the Globetrotters would have been perfectly content to stay and practice in that shack. The Scorpion managers would, of course, still try to scare them and keep them awake, but wouldn’t have the full resources of Haunted Island at their disposal. 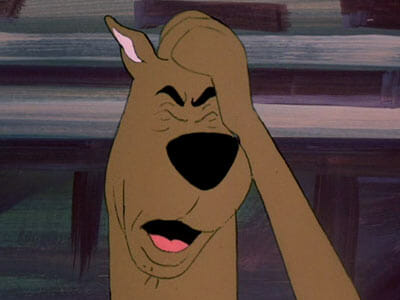 I know, I know

Whatever. It’s late and I’m going to bed.