Scooby and the gang meet the Harlem Globetrotters and tangle with a group of ghost pirates. 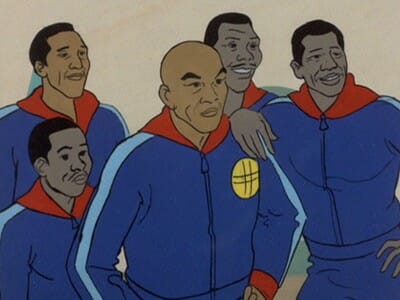 The Mystery Machine drives through foggy swampland at night. Its occupants, Fred, Daphne, et. all are lost (as usual). Scooby and Shaggy get scared when they look out the window because they see a swamp monster. Is it really? No, it’s a tree.

Two bright lights follow the Mystery Machine. A swamp monster? No, they’re headlights from the Harlem Globetrotters’ bus. They’re lost, too. The Mystery Machine gets stuck in a swamp. The teens get out and see a ghost pirate ship sailing the waters. “Gosh. What else can happen?” asks Daphne. 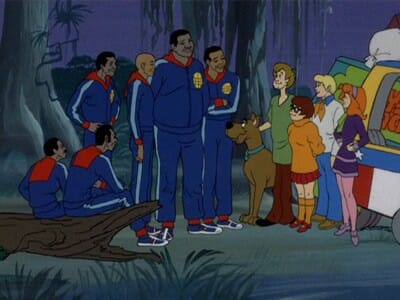 The Scooby gang meets the Globetrotters

The Globetrotters bus arrives and it too plunges headfirst into the swamp. The two groups of characters unite, then “comically” run away from an alligator before finding a nearby inn.

An old one-eyed man named Swampy Pete shows up (the owner of the inn?) and he tells everyone to leave. The Globetrotters realize they left their basketball in the bus, and Globetrotter Meadowlark heads back with Shaggy and Scooby to recover it. There, we get another moment of comedy when Scooby and Shaggy get stuck in a log, causing Meadowlark to run in fear thinking they’re a swamp monster. 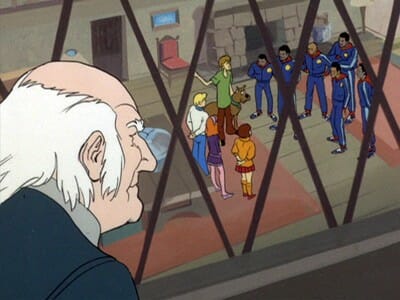 Swampy Pete spies on his guests

Inside the inn, Swampy Pete tries to scare everyone away by giving off a disembodied evil laugh, but fails. The Globetrotters have a basketball game with the Scoobies before retiring for the night.

Outside, Swampy Pete sees the pirate ship, crewed by what appears to be three pirate ghosts. The captain, Red Beard, sees there are people at the inn and he’s very much looking forward to scaring them. 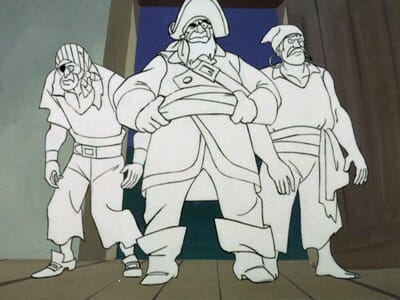 In come the ghosts

Red Beard and his ghosts enter the inn. There’s a scuffle and we see that the ghosts are really dumb, threatening people with butterfly nets instead of swords and muskets, and fall very easily for the Scooby Gang and Globetrotters’ tricks. Red Beard decides he’s had enough and pulls out his trump card: a skull that can summon an army of ghosts (that are obviously wall projections). It’s enough to spook the kids and Globetrotters into surrendering.

But their surrender doesn’t really amount to anything because Velma realizes it’s sunrise and that the ghosts are supposed to vanish. Red Beard and his men turn out the lights and disappear. Where did they go?

Scooby and Shaggy stumble on a trapdoor, that causes them to fall into a motorboat containing the three ghosts, who fail to notice their stowaways and promptly leave.

The rest of the Scooby gang and the Globetrotters head down the trapdoor where another motorboat conveniently waits for them. They follow a trail of Scooby Snacks dropped by Shaggy and Scooby (or what remains of the trail after it’s eaten by catfish) and find Red Beard’s oil rig lair. 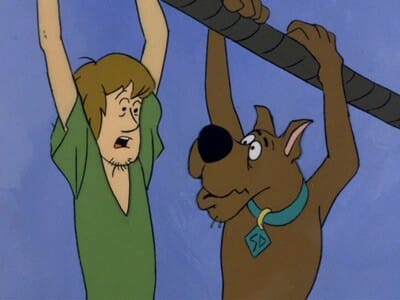 Scooby’s sneeze betrays his and Shaggy’s hiding spot to the pirates. A chase scene ensues, and Shaggy falls on a belaying pin, causing the ghost pirate ship sprout like a pop-up book.

One of the ghost pirate gets scared when he sees what he believes to be an approaching swamp monster – it turns out to be the Scooby Gang/Globetrotters’ motorboat disguised as a swamp monster by draping green cloth over it, natch. The chase scene continues, now with added players.

Swampy Pete is also here. He’s been awfully suspicious lately, talking on a radio all the time. What’s he up to?

Red Beard tries to diffuse the situation by once again whipping out his skull projector and threatening to summon his so-called army of ghosts. Surprisingly, the Scooby gang falls for it again, but Scooby’s foot inadvertently pulls up the belaying pin and the pirate ship disassembles, trapping the pirates. 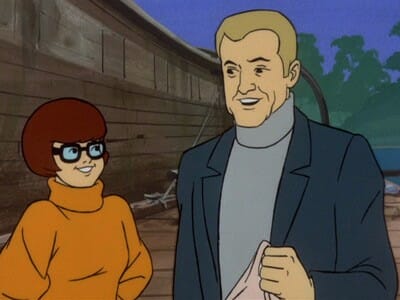 Pete takes off his face to reveal he was in disguise; his true identity is Lt. Pete Duggam of the Harbor Patrol. Why he disguised himself as a crazy old man, nobody knows, but he is quite the method actor. He says Red Beard and his gang were a group of crooked oilmen doing what amounts to, as Velma points out, oil bootlegging.

The Globetrotters talk about having to get to Miami for their game again, and Duggam arranges a helicopter to take everyone there. 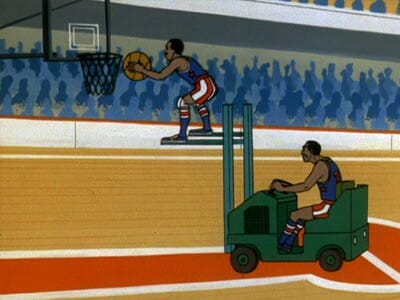 How is this allowed?!

As is typical with this Scooby show, the 45 minute runtime is detrimental – there was so much filler! The worst offenders being the scene where Shaggy, Scooby, and Meadowlark head back to get the basketball, and then the basketball game in the inn. Timewasters that amounted to nothing.

I was a little surprised we didn’t see Red Beard unmasked, as is Scooby-Doo tradition with its ghosts and monsters. We did see Swampy Pete unmasked, though. Perhaps there was an allowance of only one unmasking per episode imposed on the show staff. 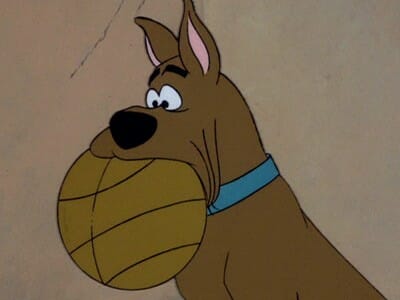 The Globetrotters were just set dressing and didn’t really add to the plot. Actually, they detracted from it. Almost everything they said was a horrible joke.

I do think the running gag of false swamp monster sightings was mildly funny, and at least had a payoff at the end when it was used to trick Red Beard.