Scooby and the gang head to a ski lodge and team up with Laurel and Hardy to take down the car-stealing Ghost of Bigfoot. 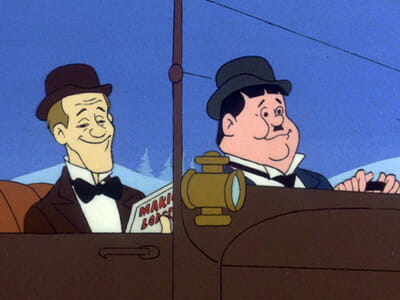 We start this episode with the Mystery Machine – gang inside, natch – driving through a snowy locale to a ski lodge. On the way, they pick up Laurel and Hardy, whose car broke down; coincidentally, they too were headed for the lodge. I’d suspect these two were ghosts, considering both were already dead by the time Scooby-Doo started, but no, they are very much alive, it seems. 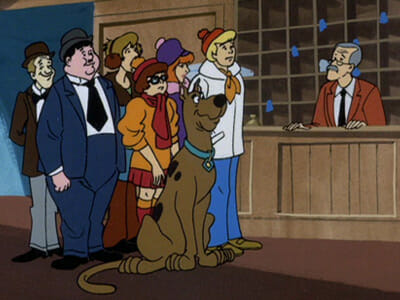 Fun at the Lodge

Arriving at the ski lodge, the party meets the owner, who complains about how nearly all his guests and staff have been scared off by the supposed Ghost of Bigfoot. Only one guest remains – Jonathan Crabtree, an old man in a wheelchair. While Scooby and the others head to their rooms, Laurel and Hardy apply for bellhop jobs at the lodge and are immediately hired.

That night, the Ghost of Bigfoot lurks around the lodge, messing with the guests; in one instance he appears behind the medicine cabinet in Laurel/Hardy’s room. After getting his fill of frightening, Bigfoot escapes the lodge, leaving no footprints behind. 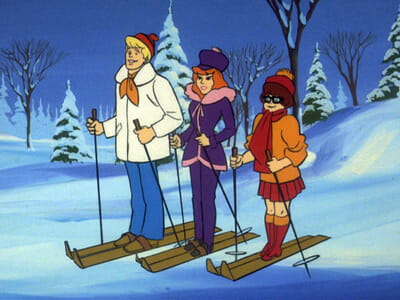 This scene takes a long time

The next day, the gang plus Laurel and Hardy, go skiing in an overly long sequence. They meet Hans the ski instructor. Gee, I wonder if he’s the true identity of the Ghost of Bigfoot. They certainly have the same build… 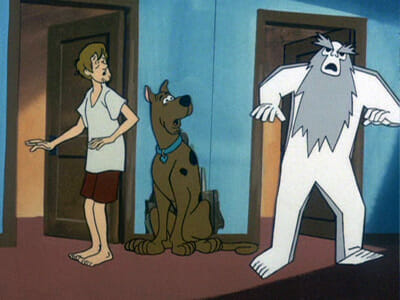 Shaggy and Scooby run into the ghost

Upon returning to the lodge, the gang discovers Mr. Crabtree has gone missing. They split up to search for him, but end up finding the Ghost of Bigfoot instead. After a brief chase scene, the monster disappears once again, only this time leaving a clue – a dropped piece of paper with license plate numbers.

It turns out the license plate numbers all belong to stolen cars. While driving in the Mystery Machine, Fred and the others spot the ghost driving an auto transport truck; they follow it to a parking lot full of cars. 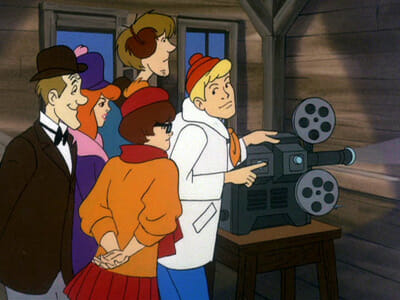 In a small office nearby, Fred finds a projector with footage of the Ghost. This was how the Ghost would appear and not leave any footprints. However, Daphne knows for a fact that the Ghost they encountered earlier in the lodge was solid.

Bigfoot shows up and Scooby, Shaggy, Laurel, and Hardy chase him in a snow mobile to a saw mill. We get more chasing and shenanigans, but rest assured, Bigfoot is caught in the end. Hans reappears to reveal himself to be an undercover police officer who was searching for the car thief AKA Bigfoot AKA Mr. Crabtree, who didn’t need a wheelchair after all. 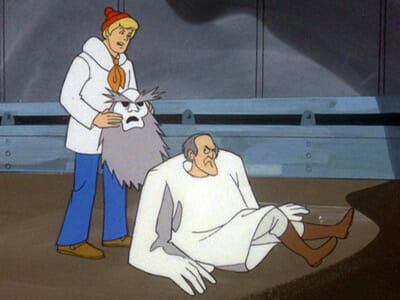 With Bigfoot gone, the lodge’s guests return, Laurel and Hardy keep their job, and Scooby and the gang enjoy the rest of their vacation.

This episode was long and lame.

I’m not very familiar with Laurel and Hardy; all I really know is that they got into a lot of physical/slapstick arguments…which didn’t happen in this episode. I had no idea Laurel was so clueless. Was it exaggerated in this episode? He doesn’t even know what a seatbelt is, and as soon as he saw it, promptly unbuckled himself and nearly fell off the ski lift chair. “Go back to sleep, dear. It was only a bad dream.”

The Ghost of Bigfoot made for an incredibly boring monster in both design and execution. I feel the whole projector gimmick is very problematic, especially when he was hiding behind the medicine cabinet. How did that work?