Spider-Man fights a blue guy made out of electricity, then his best friend turned goblin. 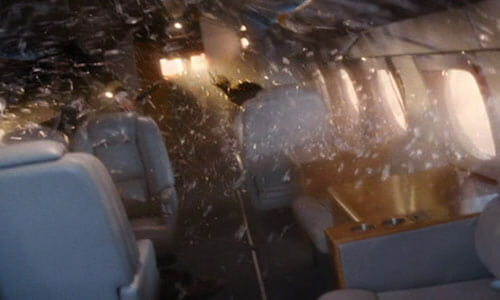 What’s this spy stuff doing in a Spider-Man film?

The film begins with a flashback showing Peter Parker’s parents shortly after we saw them in the opening of the previous film. They’re on an airplane fleeing the country, but some guy tries to kill them for some reason, and then they jump out the plane and die. It’s a really dumb scene so out of place in a Spider-Man film, and tries way too hard to be like Jason Bourne.

Would it surprise you if I said that nothing in this scene is particularly relevant to the events that follow? No? Good. 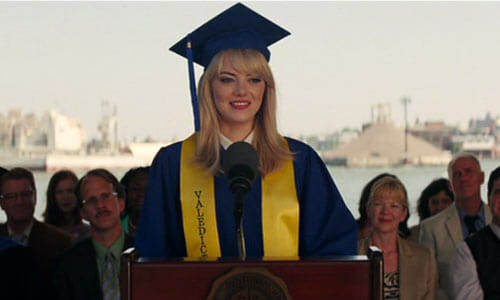 After the title, we get the “for realsies” opening of the film, showing Spider-Man foiling an armed robbery in the city while also trying to make it to his high school graduation ceremony. He makes it just in time, but ends up missing most of the speech his girlfriend (Gwen Stacy) gives. 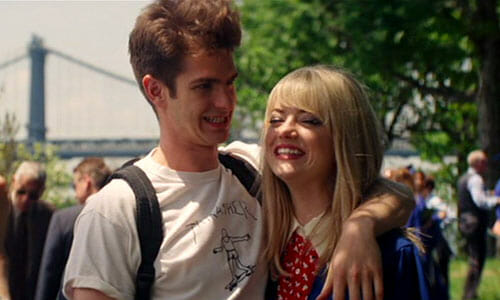 After the ceremony, we see that Peter still feels guilty for the death of Gwen’s father at the climax of the previous film and for disobeying his dying wish – “Stay away from Gwen.” This guilt manifests as Denis Leary hallucinations. I think I know a couple people who wouldn’t mind that, actually. 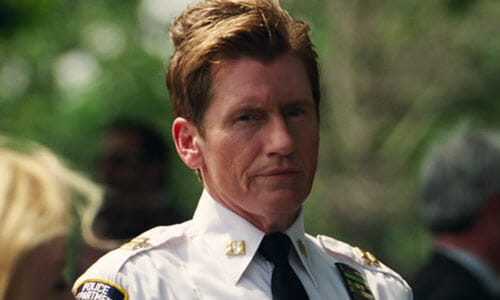 Meet mild-mannered Oscorp employee Max Dillon (Jamie Foxx), Spider-Man’s #1 fan/stalker. After getting ditched by his coworkers and stuck on pipe-fixing duty, Max accidentally falls into a tank full of electric eels and gets electrocuted. Instead of dying, he turns blue and gains the power to control electricity. 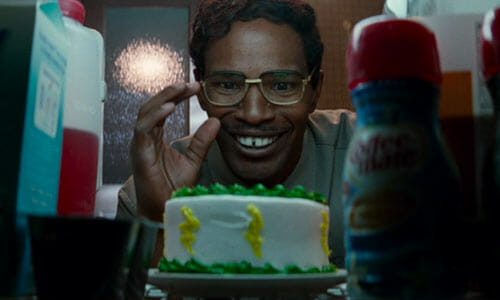 Max, now Electro, picks a fight with Spider-Man (for some reason) in Times Square that ends in a draw. Both parties leave to fight another day. 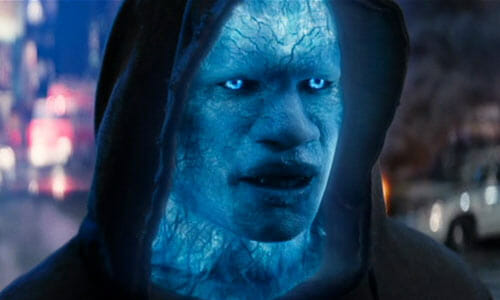 Oscorp CEO Norman Osborn is dying of an unnamed disease. His son Harry finally comes home after being shipped off to boarding school and meets with his dying dad; little is revealed about Norman’s disease, just that it’s genetic and that Harry will get it as well. 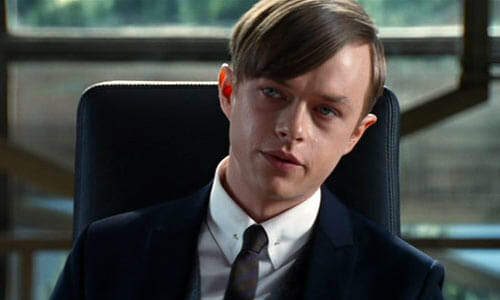 Harry takes over Oscorp and acts like an asshole to people who are also assholes. We do get a glimpse of Harry being a nice guy, though, when Peter drops by for a visit. The two were school chums before Harry was shipped off to “Elsewhere.” 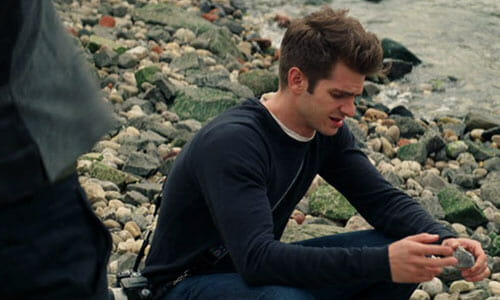 Harry and Peter hang out

Harry starts experiencing the early symptoms of his father’s disease and starts looking into a cure. One possibility lies in mutagenic junk in Oscorp’s spider experiments. They were all destroyed for PR reasons after the Lizard mess in the last film, but there’s a chance that Spider-Man’s blood holds the key to a cure.

Harry invites Spider-Man over for a blood donation. He comes, but only to tell Harry he’s not giving any blood. What an asshole. 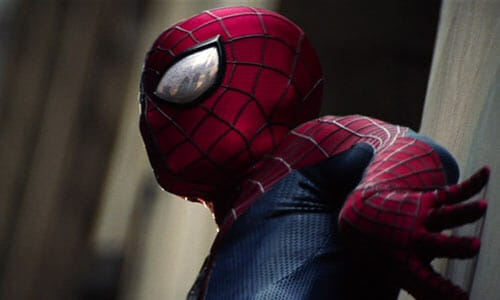 Spider-Man gives his blood to no one!

So Harry just goes to a mysterious Oscorp Basement full of enough weapons for six more sequels, and injects himself with mutagenic spider venom. But instead of curing the illness, it turns Harry into a crazy goblin monster. 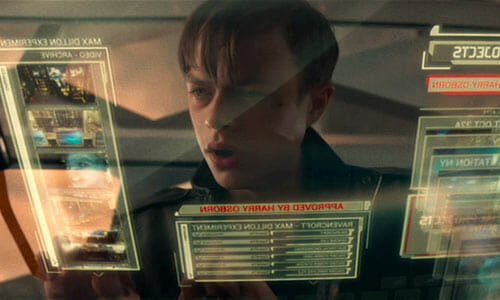 Harry searches for a cure

Gwen lets it drop that she’s thinking about going to university in England. Peter catches up to her at the airport and tells her he loves her so much that he’ll go to England too. But that will have to wait because Electro is attacking the city again. 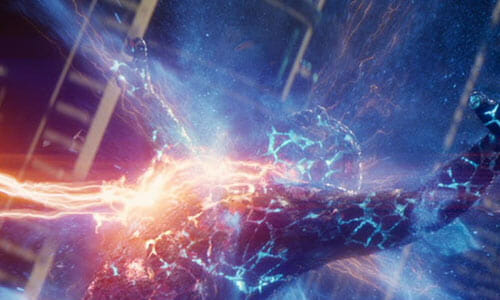 Peter changes into Spider-Man and, with Gwen’s help, overloads Electro with energy from a power plant, destroying him. But just when we thought the movie was over, Harry – now known as the Green Goblin – shows up and grabs Gwen. There’s a fight in a clocktower; Goblin is defeated, but Gwen dies in the process. Damn. 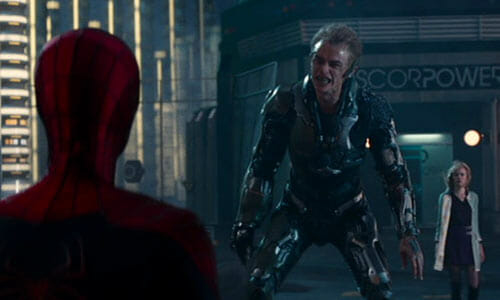 Is this movie over yet?

Time passes, and Spider-man faces off against the robber guy from the beginning of the film (now wearing “rhino” armor). We cut to black right before their fight actually begins. 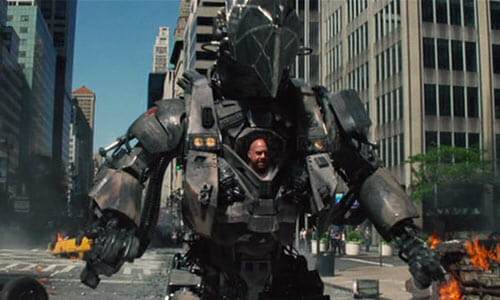 This movie better be over

This film was a lot like the mess that was Spider-Man 3, except it had higher aspirations: to make a franchise. There were tons of spin-off films and sequels in the works, but all these plans fell through and Spider-Man ended up getting another reboot, this time in the Marvel Cinematic Universe.

But the attempt at laying down the foundation for potential sequels took precedence over what really should have been the focal point of this film (and any film for that matter) – the story. 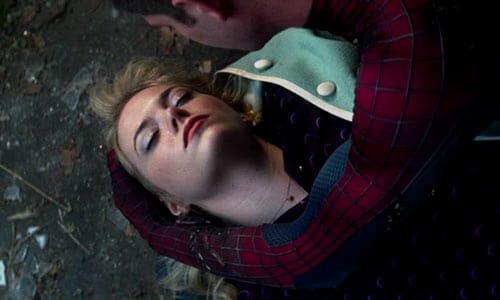 A lot of things don’t make sense and characters have flimsy motivation, like Electro. How does he go from loving Spider-Man to hating him overnight? Did transforming into a member of the Blue Man Group make him insane? That’s the only explanation I can think of, and it’s a lazy one. 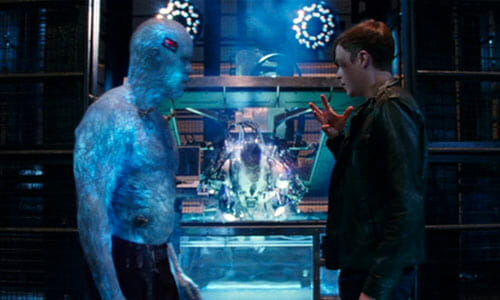 Too many villains, Mozart

What’s up with the Osborne family disease? Norman was able to live several decades before succumbing to it, yet it manifested really early in Harry. Why is that? And Green Goblin just came out of nowhere and only shows up at the end, like Venom in Spider-Man 3. Having two villains really strained this film’s ability to focus or have a coherent arc. 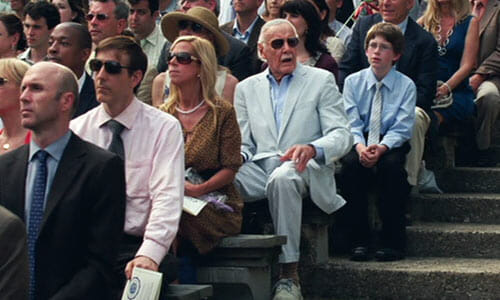 The ending just plain sucked. I think someone online (forgot who) said that he likened the last scene to Butch Cassidy, and that Spider-Man doesn’t survive the Rhino fight. Yeah, I’m okay with that.

The only good things I have to say about this film are that Emma Stone still makes a good Gwen Stacy, and the Times Square fight was visually appealing. 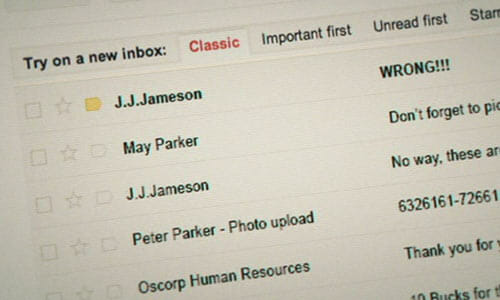 But this film isn’t fun to watch in the least. At least Spider-Man 3 had the pie scene. What does Amazing Spider-Man 2 have to offer? More spy backstory nonsense? No thanks.