In this midquel to the 2009 Star Trek film, learn how Nero spent 25 years waiting for Spock to show up.

The story picks up immediately after the opening scene of Star Trek; the Narada has taken heavy damage after being rammed by the USS Kelvin. Now knowing they are in the past, members of Nero’s crew think they should all head back to Romulus, but getting revenge on Vulcan and the Federation is at the top of Nero’s to do list. 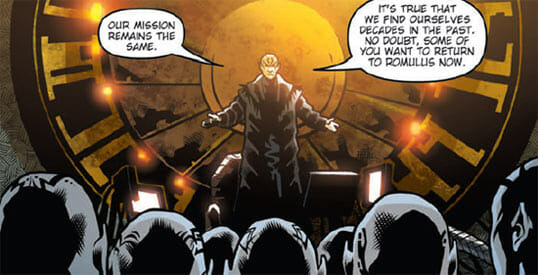 A bunch of Klingon warships led by Kor decloak and send boarding parties to the Narada. I like how these Klingons have forehead ridges but wear the grey and black uniforms from TOS.

The Romulans are brought to the Klingon penal colony Rura Penthe – we see the warden, Koth, who looks like he’s supposed to be the same warden played by William Morgan Sheppard in Star Trek VI. 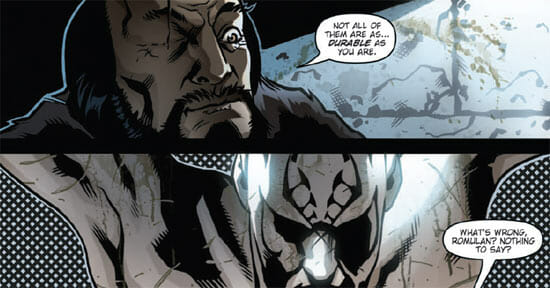 Nero is tortured by Koth on Rura Penthe

25 years pass on Rura Penthe; the Narada is stuck in an “orbital quarantine” with Klingons on board, trying to unlock its secrets to no avail. Despite daily torture and interrogation sessions, Nero still hasn’t spilled any beans. His hatred of Spock keeps him going.

Nero loses the tip of one of his ears

He also takes a drug that gives him peace, letting him see hallucinations of his wife. One of the side effects of this drug is that it awakens his latent Romulan telepathy.

Nero is introduced to Clavell

Nero is introduced, by one of his crewmembers, to a human man named Clavell. He’s a stellar cartographer who knows about black holes. Nero wants to know exactly when Spock will arrive in this time period, but Clavell says it’s practically impossible to calculate, especially with what little resources they have on Rura Penthe.

The Klingons take Nero for another interrogation, having found Spock fanart in his room. “We have found the means to make you talk. Your long silence ends today.” Nero somehow kills them all (happens off panel) and frees his crew.

They take a shuttle and hop aboard;  Nero does some telepathic stuff to awaken the Narada and it kills all the Klingons aboard via electrocution.

Narada seems to have a mind of its own and warps to the edge of the Delta Quadrant…to V’ger!

Nero makes contact with V’ger, which detected the Narada’s “mind” and called out to it. V’ger tells Nero exactly where and when the black hole will open and Spock will appear. 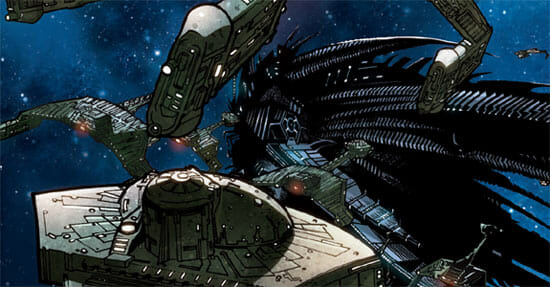 The Klingons don’t go down without a fight

The Narada pulls in Spock’s ship, the Jellyfish, and Nero takes its supply of red matter, which he plans to use to destroy every planet in the Federation.

47 Klingon ships led by Koth arrive. They are no match for the recovered Narada and are all destroyed – but at the last moment, they send a distress signal on all frequencies. Nero hopes Starfleet will hear this signal and attack him next.

As for Spock, Nero gives him a coat and dumps him on the icy planet Delta Vega, which has a unique orbit that will allow him to see Vulcan’s upcoming demise.

Spock catches up with Nero

This four issue comic series came out at the end of 2009 and answers all the questions about Nero you never knew you had. Like how did Nero lose his right eartip? Turns out it was eaten by a lizard dog on Rura Penthe. Good to know.

V’ger’s involvement in the third issue was really gratuitous and unnecessary, especially when its role in the story is to simply give Nero directions. It takes an entire issue!

Did V’ger really have to show up?

Overall, this series was not needed at all. Countdown was enough to flesh out Nero. All the important stuff we see in these comics were mentioned in the film (or in Rura Penthe’s case, shown in deleted scenes); that’s all we needed.