Malibu Comics, an independent company, was the first comic book company to publish comics based on Star Trek: Deep Space Nine in 1993, between the show’s first and second seasons. They would have the license until 1995, when their contract ended; after which, Marvel (who later acquired Malibu) started their own run of Deep Space Nine comics in 1997. 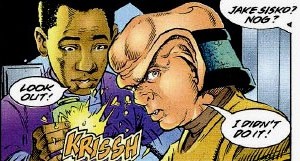 Jake and Nog in trouble

Our story begins on the titular space station, Deep Space Nine, where Keiko O’Brien has just finished touring Lt. Dax’s science lab. But wait! Where are Jake and Nog? In the back of the lab hanging out, of course. Keiko startles Nog, who breaks a glass beaker, and the two lads have to stay behind to clean up the mess.

Later, we somehow find ourselves in the station’s 14th level, where Jake and Nog play Starfleet. They succeed in opening a sealed door, which unleashes a mass of green goo. “I told you we shouldn’t have opened it!” Jake yells as they make their escape.

Meanwhile, Commander Sisko meets with Chief O’Brien and Captain Johnson, the captain of the USS Armstrong. The Armstrong has recently returned from a mission to the Gamma Quadrant with an artifact that looks like a treasure chest.

Open it! Open it! O’Brien takes it to Level 14 for storage. Level 14! Dun dun dun. He finds the green goo and it emits a gas that makes him cough a lot. An emergency beam out saves him just in time. 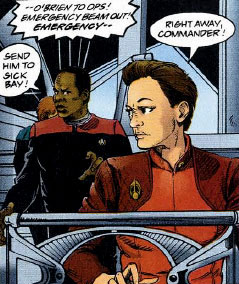 Sisko and Kira are on the case!

Dr. Bashir analyzes a sample of the goo that was transported with O’Brien: “Apparently some kind of mold,” he says. According to Dax, it absorbs oxygen and produces toxic gas. Sisko gets a message from Odo – the goo has invaded the Promenade. Odo rescues Quark, and all the other denizens are evacuated. 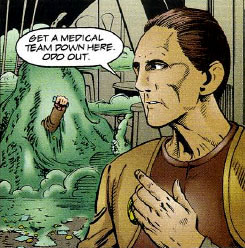 The green goo invades the Promenade

In Ops, Bashir reveals that further scans of the goo indicate that it may have been created by the Cardassians. Bashir tries to get some information out of Garak but is only fed cryptic remarks.

In the science lab, Sisko thinks the artifact has something to do with what’s going on, but Captain Johnson doesn’t want anyone touching the artifacts, afraid that they may be accidentally destroyed. 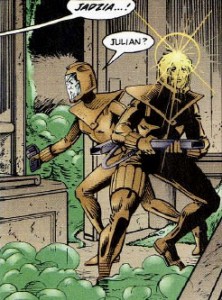 These Starfleet hazmat suits are ugly!

Bashir comes up with the next plan of attack: spray the goo with fungicide. He, O’Brien, and Dax don environmental suits and start spraying, but it doesn’t really work.

In Ops, Sisko gets a message from Dr. Wembley, the scientist on the Armstrong who found the Gamma Quadrant artifact. Sisko is still convinced the artifact is behind it all, which angers Wembley, “You can’t blame YOUR problem on MY artifacts, Sisko!” He closes the hailing frequency, when Kira reports the arrival of three Cardassian cruisers.

Gul Dukat hails the station and reveals that Cardassian scientists did indeed create the goo, but only they can destroy it, and he wants to come aboard. “Deny us,” he says, “and Deep Space Nine – and everyone aboard it – will perish.”

Not bad. The art was pretty good and all the characters’ likenesses were spot on, especially Chief O’Brien, and I love the cover art. This felt a lot like a season 1 episode: there’s something weird happening on the station that needs to be dealt with, meanwhile we have Jake and Nog hijinks.

However, this will prove to be the issue’s downfall because it didn’t feel particularly original. It reminded me a lot of Babel, where something that had been placed on the station in the past comes out to cause problems – though this time the Cardassians, not the Bajorans, are responsible for the creation of the “something.” 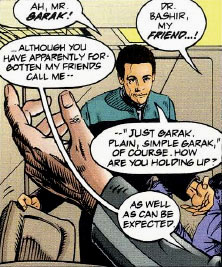 One thing that sets Stowaway apart, though, is the presence of Captain Johnson and the irascible Doctor Wembley. I always like it when the DS9 characters interact with the crews of other Starfleet ships. Though it’s fairly obvious that the artifact from the Gamma Quadrant will be the solution to the green goo problem.

It’s interesting that Garak showed up in this issue, considering he had only made one appearance in the show at this point. More Garak is always good. I wonder how he’ll react to Gul Dukat in the next issue, especially since their backstory hadn’t been established in the series proper yet.