In this prequel to the 2009 Star Trek film, learn how Nero and Spock fail in their attempt to avert the destruction of Romulus. 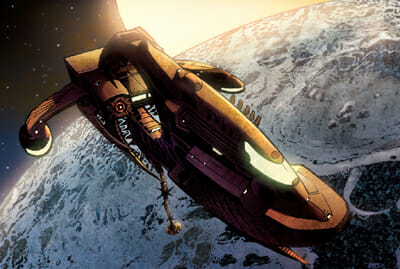 Our story begins with the Romulan mining ship Narada, captained by Nero, detecting a rich source of the rare mineral decalithium on a planet in the Hobus star system. Nero is forced to abandon the mineral and escape when Hobus fluctuates and becomes a supernova.

The planet is quickly destroyed, and all its decalithium makes the supernova bigger, better, faster, and stronger. Now this super-supernova threatens to destroy more systems, including those belonging to the Romulan Empire. 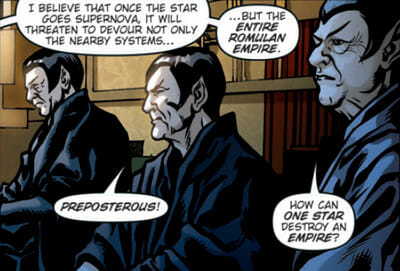 Later, on Romulus, we’re introduced to Spock, whose narration helps catch us up on what he’s been up to since we last saw him in TNG. Romulans have become more and more open and tolerant, and Spock has become an official ambassador, but there is still a ways to go before Romulan and Vulcan unification.

Spock addresses the Romulan senate and briefs them on what happened to Hobus, then offers a solution: use Vulcan technology to process decalithium to create Red Matter, which can then be used to make an artificial black hole to suck up the supernova.

The Romulan senators cause a commotion, as they don’t believe any of this (they probably don’t believe in global warming, either). Nero, in the peanut gallery, stands up for Spock, but the senators blow him off, too. 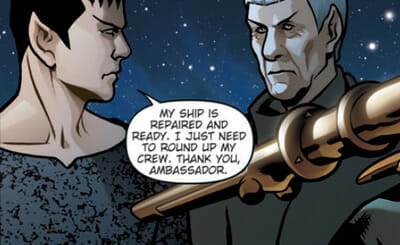 Nero invites Spock over for tea and tells him the Narada and its crew are at his disposal. “Thank you, Nero,” says Spock, “and thank you for your trust.”

Nero says goodbye to his pregnant wife and leaves Romulus in the Narada.

The Narada stops at a random planet to extract its decalithium but gets ambushed by a trio of Reman ships. The Enterprise E, commanded by Data, soon shows up and attacks the Reman ships. 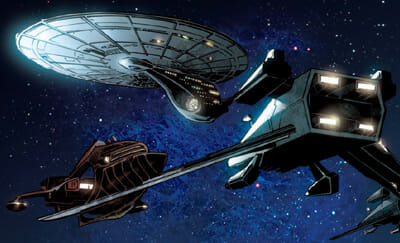 The Enterprise comes to the Narada’s rescue

The Reman ships are disabled, and Data beams aboard to say hi to Spock and Nero. Nero’s stressed out because the Narada’s drill was damaged in the attack, and he wasn’t able to get all the decalithium he needed.

Data tells Nero that the Reman ships are fully stocked with decalithium, and that under Federation Rules of Engagement, he could consider them contraband and take it all. 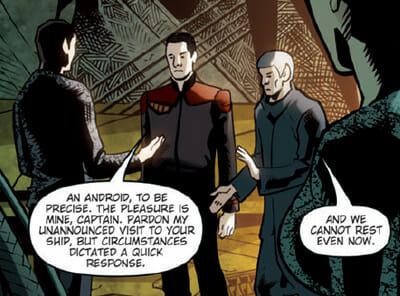 Captain Data and the Enterprise

Later on the Enterprise, Spock visits Data for a chat (I love how Data has a giant painting of Spot in his ready room). Data explains the reason he’s alive after he died in Star Trek Nemesis – his “neural nets were successfully imprinted onto B-4’s existing programming.” 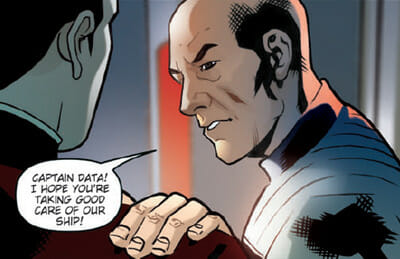 The Enterprise and Narada arrive at Vulcan to pick up the tech they need to spin decalithium into Red Matter. Spock, Nero, and Data beam down, where they’re greeted by the current Federation Ambassador to Vulcan, Jean-Luc Picard.

They all go to the Vulcan Council, but the councillors are jerks and don’t want to share the Red Matter tech with the Romulans. Nero becomes pissed that he wasn’t able to accomplish anything and heads back to Romulus just in time to see it destroyed by the supernova. 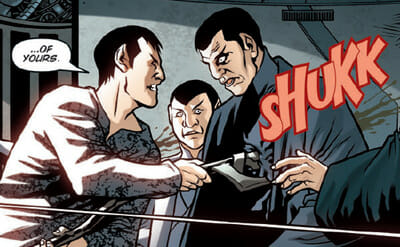 Nero gets hailed by a shuttle belonging to the Romulan Senate and beams its passengers aboard the Narada.  The bitter, broken, and now mildly insane Nero tells the senators “I told you so,” then kills them all.

On the next page we see Nero and his crew shaving their heads and getting tattoos, an old Romulan mourning tradition. Nero: “…we burn them deep. So that they will never fade. Because life does not go on.”

The Narada then heads to a super secret Romulan base and gets upgraded with prototypal Borg technology. Nero wants revenge, and Vulcan is number one on his list.

Flight of the Jellyfish

Back on Vulcan, Spock and Picard return to the Vulcan Council to tell them that the Hobus supernova continues to grow. The more it destroys, the stronger it becomes; it threatens the entire galaxy.

The Vulcans have already started processing the decalithium, but they need a special ship to deliver the Red Matter into the center of the Hobus star. Spock and Picard know of such a ship that can handle the journey – the Jellyfish.

The Jellyfish lands on Vulcan and its pilot (and designer) steps out. Why, it’s Geordi La Forge!

Word of Nero’s deeds, and the murder of the Romulan Senate, reaches Vulcan, prompting Spock to volunteer to pilot the Jellyfish and deliver the Red Matter to Hobus. 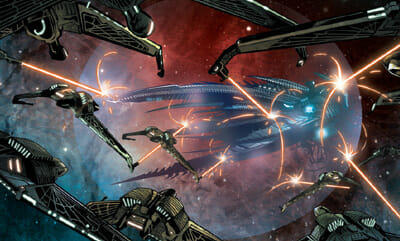 The Klingon fleet attacks the Narada

The Narada, now on the border between Romulan and Klingon space gets attacked by a fleet of Klingon Birds of Prey commanded by General Worf.

Nero unleashes the Narada’s power and destroys several Klingon ships, then hails Worf, demanding he come aboard to personally surrender. Instead, Worf gets some of his guys together and boards the Narada to kick ass.

Worf fights his way to the Narada’s bridge, but a pointy H.R. Giger looking-thing comes out of the wall and impales him through the back.

Worf and his crew cause mayhem on the Narada

Leading to the End

The Enterprise arrives and finds debris from the Klingon fleet. The Narada decloaks, and Nero offers to give them Worf if they lower their shields. Data says okay, and Worf (still alive) is beamed aboard. The Narada attacks the Enterprise, and the Enterprise sustains heavy damage before Data brings the shields back up.

Nero leaves the Enterprise and goes after Spock, who’s in the Jellyfish dumping the Red Matter into the Hobus supernova. A black hole is formed, containing the supernova, but both the Narada and the Jellyfish are pulled into the singularity.

The Enterprise’s warp engines are repaired, but by the time they arrive at the black hole, they’re too late to save Spock. “May his soul live long and prosper,” says Picard.

The Jellyfish races to the supernova

Star Trek: Countdown came out in the months leading up to Star Trek 09’s release and served the purpose of bridging that film with its predecessor, Star Trek: Nemesis. We meet Nero, Star Trek 09’s villain, and get some of his backstory that wasn’t present in the film, while we also say goodbye to Picard and the 24th Century. While Star Trek comics have generally been regarded as being non-canon, Countdown was overseen by the writers of Star Trek 09, and has been deemed canon. Or at least, more canon than the X-Men crossover comics.

For the most part, Star Trek: Countdown was an entertaining read, though it did reek of fanfiction in that it brought back a bunch of fan favorite characters and made too many needless references to past events.

Were all these characters essential?

Having Spock in the story is of course a necessity, and Picard I could buy as Ambassador to Vulcan, but Data, the Enterprise, the Remans, Geordi, and especially Worf felt shoed in. Did Geordi really have to be the designer of the Jellyfish? Did the Klingons really have to show up? Although it was nice to see them all again, their appearances felt way too contrived. And don’t get me started on the Narada having Borg technology.

Like Star Trek 09, the science was incredibly dubious. Countdown tries to do some damage control in that regard, like explaining exactly how the supernova threatens the entire galaxy, but Red Matter being revealed as refined decalithium doesn’t really do anything for me.

There were a couple panels with characters, or certain angles of the Enterprise, looking off, but not bad otherwise. I really like the design of the Narada, pre-Borg enhancements. 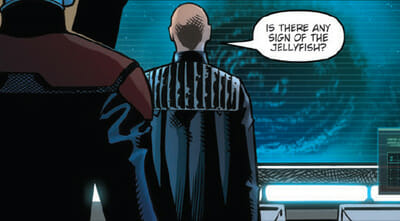 The Jellyfish disappears in the blackhole

The highlight of Countdown is Spock’s relationship with Nero as it slowly deteriorates over the course of the miniseries. There’s an air of tragedy in their story, and their futile attempt to save Romulus, that I really dig.

Overall, this miniseries fulfills its purpose of linking two films and eras of Trek, but it could have been a bit more conservative in its callbacks, as many were pointless. But Countdown is still fairly enjoyable and can help enhance the experience of watching Star Trek 09.