Preying mantis criminal Zorak breaks out of jail and sets his sights on one goal: getting even with Space Ghost. 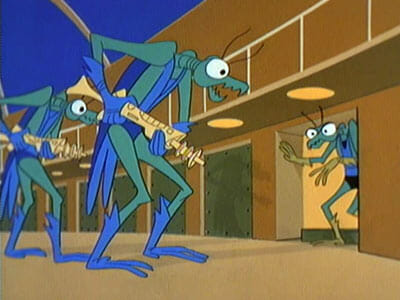 Zorak is broken out of prison

At Omegan Prison, a ship full of giant alien mantises blasts through the brick wall (yes, a brick wall in space) and busts out their leader, Zorak. “It is about time,” he says in a monotone voice. 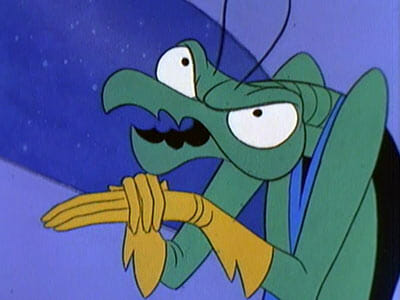 He wants to get revenge on Space Ghost for his arrest; the mantis ship heads over to Ghost Planet. Space Ghost isn’t home, so Zorak kidnaps Jan and Jace and leaves a ransom note pinned to the door: “It’s a trade! Your life for my hostages!” written in lovely cursive. 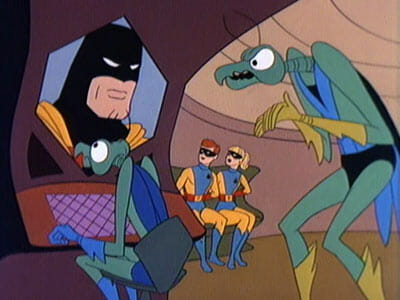 After seeing the note, Space Ghost and Blip head over to Zorak’s base to make the trade. Zorak has Space Ghost remove his power bands then sends a shitload of killer mosquitoids to kill him. 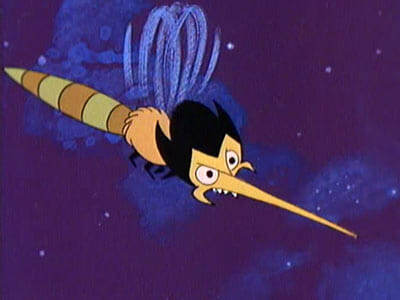 Space Ghost flies back to his ship and puts his power bands back on, then makes quick work of the mosquitoids. 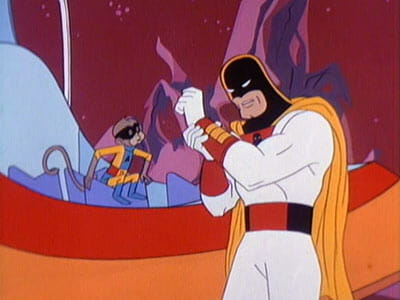 Space Ghost is reunited with his power bands

Zorak stuffs Jan and Jace in a space rocket with a timed explosive on board. Space Ghost rescues them, then reverses the rocket so it crashes into Zorak’s base and explodes. 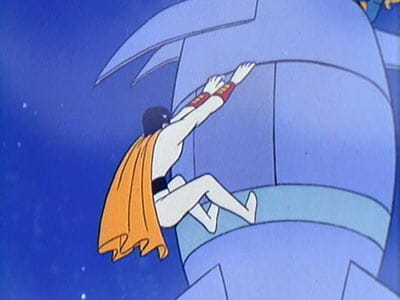 We end with a comic relief scene of Blip hiding in a storage compartment. Fortunately it doesn’t end with everyone laughing – thank goodness for small miracles. 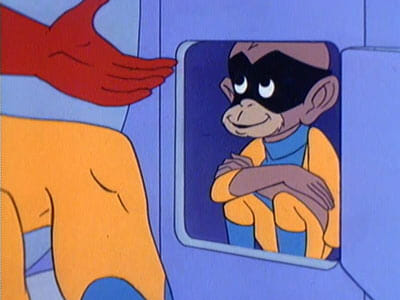 Every episode HAS to end with Blip doing something “cute”

Zorak really makes this episode work. He has a very memorable design, and I like that there’s already established history between him and Space Ghost. His plan could use a lot of work, though. For one, he needed to put more distance between Space Ghost and his power bands before trying to kill him. Plus he was too quick to get rid of his hostages – his only real advantage. 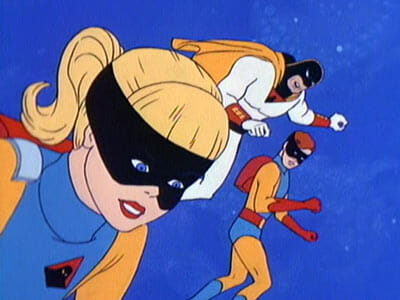 Our heroes watch the destruction of Zorak’s base

The episode went by pretty quickly without a dull moment. Of course it could have been better, but with such a short runtime, there’s no room for complexity. 5 minutes of superhero action and nothing more – but sometimes, that’s all we need.