To commemorate Scooby-Doo’s tenth anniversary in 1979, Hanna-Barbera made a 50-minute primetime animated special unlike anything seen in the franchise before. For the first time, a Scooby-Doo installment didn’t involve a mystery or some kind of monster. Instead, Scooby Goes Hollywood is full of meta humor, parodies, and song and dance.

Based on what I’ve seen online, this is considered one of the worst Scooby-Doo productions ever. 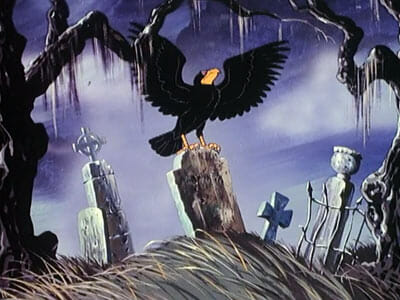 We begin with a couple cool shots of a crow as it flies by a creepy castle. Inside, Scooby and Shaggy are chased by a menacing crab creature, the Crabby Creature of Creepy Cragg to be precise. A director yells “cut” and we learn that what we’ve witnessed so far is all a part of a television show. 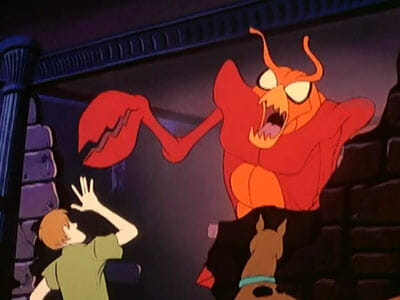 Scooby Goes Hollywood is full-on meta, and establishes that Scooby and the gang are all television actors playing themselves. But the Mystery Machine is real, and we’re led to believe all the mysteries the Scooby gang solved really happened. They’re just now actors playing fictionalized versions of themselves for some reason. 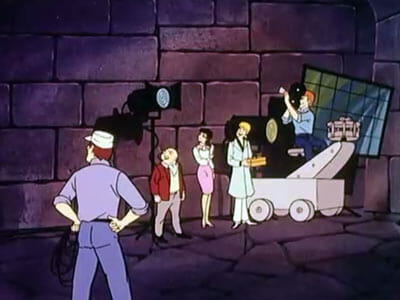 It was all a lie!

Outside in the studio lot, Scooby and Shaggy complain about how, despite starring in a highly successful series, they’re still not getting the respect they deserve. Shaggy proposes he and Scooby have a “man-to-dog talk,” launching us into the first of several musical numbers, “The Name to Remember is Scooby-Doo,” where Scooby and Shaggy burst through various sets in the studio, causing millions of dollars’ worth of damage. 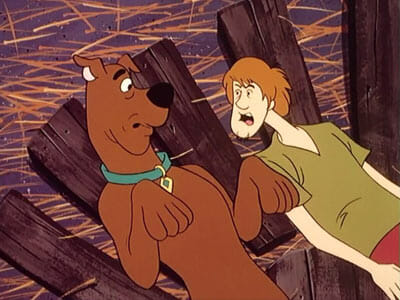 Scooby and Shaggy meet with the network president, CJ, hoping for more acting opportunities. Shaggy’s optimistic, considering CJ’s a Scooby-Doo fanboy, albeit a gleefully demeaning one. 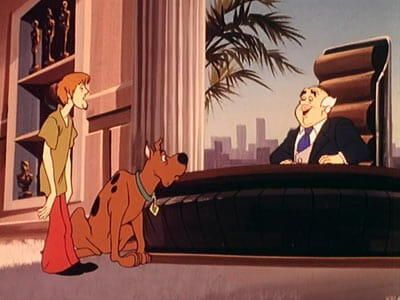 Shaggy and Scooby meet with CJ the network president

Shaggy presents CJ a film reel containing a pilot showcasing Scooby’s skills, “He wants to stretch himself as an actor of dramatic depth. No one ever takes him seriously.” 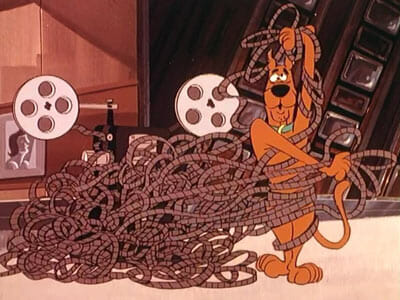 The pilot is called “How Scooby Won the West” – obviously a Western – and it’s produced, directed, written by, and starring Scooby-Doo. 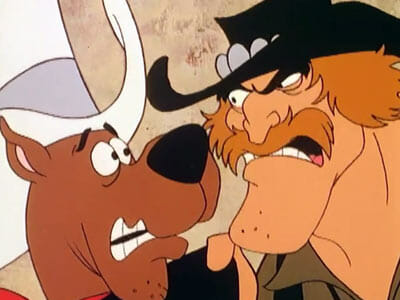 Sheriff Scooby is threatened by Jesse the outlaw

We see Scooby as sheriff and Shaggy as deputy; an outlaw by the name of Jesse Rotten orders Sheriff Scooby out of town, giving him until high noon to comply…which just happens to be two minutes away. Scooby appears uncharacteristically brave for five seconds, then quickly hops on a train. He gets caught on a hook and falls off, but lands on a horse, demolishing the shoddily constructed Western set before riding off into the sunset. 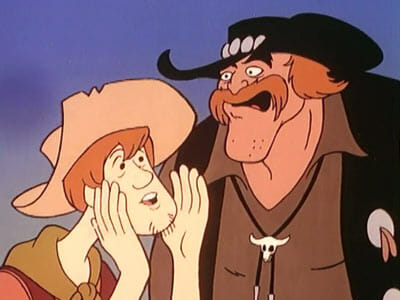 …and that’s how Scooby won the West

CJ laughs, thinking the pilot’s a joke and kicks Scooby and Shaggy out of his office. “That wasn’t quite how it was supposed to go” says Shaggy. They go out to prove to him they’re serious. 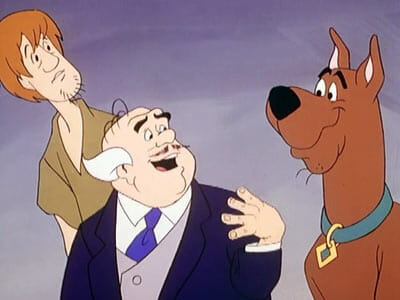 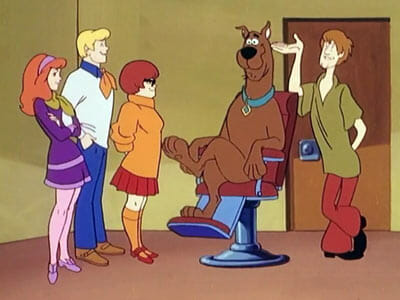 The rest of the Scooby gang makes a minor appearance

We move to a rollerskating rink, where Scooby films another pilot with an actress named Lavonne, who’s taking a break from filming her hit series to help Scooby. Shaggy aims to film this new pilot in one take, but it doesn’t go too well as Scooby and Lavonne lose control of their skates and fly into Shaggy (and the camera).

Shaggy and Scooby return to CJ’s office to show him another pilot – this one a parody of Happy Days, complete with a Fonz parody in the form of “The Groove,” who heads over to a jukebox to play the next music number: “Rooby Dooby Scooby Dooby.” 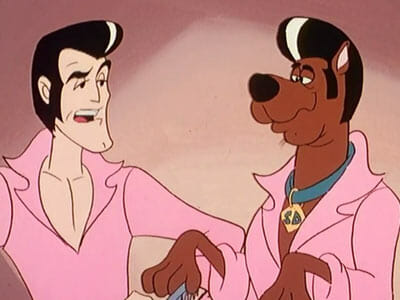 The Groove and The Scoob

After watching this pilot, CJ leaves his desk and steps into a private room to scream. I think we all need rooms like this. CJ steps back to his desk and tries to convince Scooby to go back to his regular show, but he doesn’t budge. 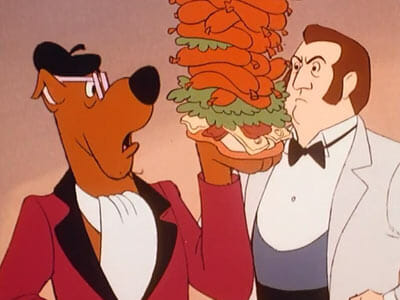 Scooby gets barred from a restaurant

In the next scene, Shaggy takes Scooby to a couple places to “rub the right elbows” with big time producers – first the Black Top Hat Restaurant, then a hotel swimming pool, but he botches both attempts and makes a fool out of himself. 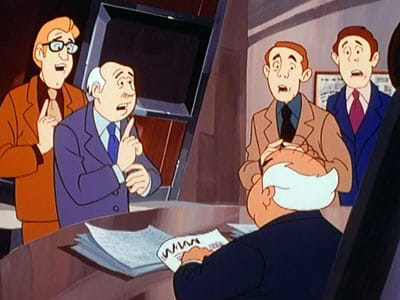 Elsewhere, Fred, Velma, and Daphne go through a photo album, reminiscing on how they adopted Scooby-Doo. They chose him because unlike the other dogs, he had character. We segue into another musical number with clips from various Scooby-Doo episodes: “Hey, remember when we did stuff?” 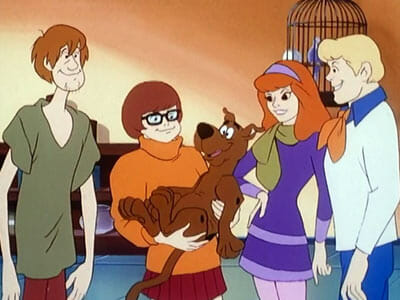 In the Mystery Machine, Shaggy tries to cheer Scooby up, giving him hope that he’ll be “another Clark Gable. Another John Travolta.” Scooby would rather be the next Lassie. He and Shaggy imagine attending a red carpet premiere. Scooby trips on the red carpet of course. 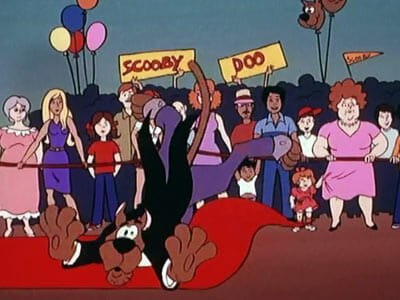 Scooby on the red carpet

The red carpet premiere is for Super Scooby, an obvious Superman parody, where Scooby-Doo fights for “truth, justice, and a bone in every doggy dish.” 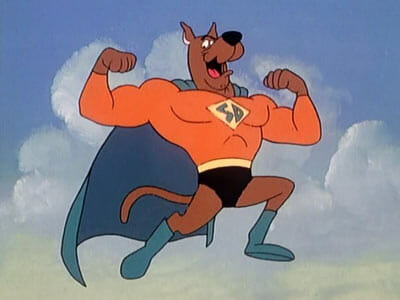 This sequence doesn’t last long and we move to an even shorter sequence showing Scooby starring in a Sound of Music parody. He starts singing “The Hills Are Alive” then accidentally falls off a cliff. This was actually kinda funny. 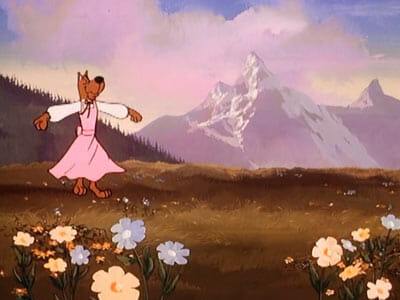 “The hills are alive…”

Back to reality, Shaggy calls CJ and hears that the studio is holding dog auditions to replace Scooby on his show, but it’s all a scheme concocted by CJ, Fred, Daphne, and Velma, hoping to get Scooby back…but it doesn’t work. 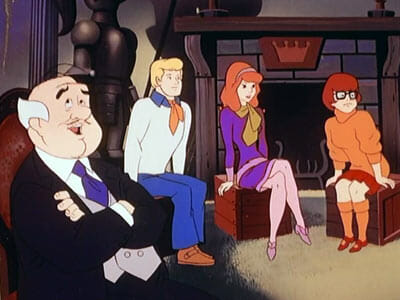 CJ and the others watch auditions for Scooby’s replacement

Later, Shaggy and Scooby return to CJ’s office with another film reel with more parodies. First there’s “Scooby and Cherie,” a magic show that shifts into another song and dance number. This one is really trippy and disco-tastic and surprisingly not bad. 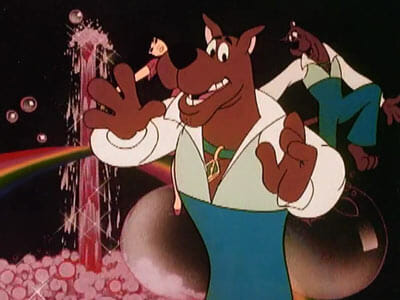 Just what is going on here?!

Then we skip to a Love Boat parody, The Love Ship (nice effort put into that name), where Captain Scooby has the ship leave port without first untying the dock ropes, taking a large part of the dock with him. 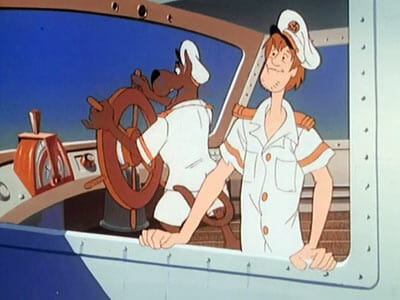 Scooby and Shaggy go on the Johnny Carson Show (well, Jackie Carlson) announcing Scooby’s departure from his cartoon and his new image. A bunch of kids around the world watch this broadcast and start saying, “Scooby-Doo, where are you?” 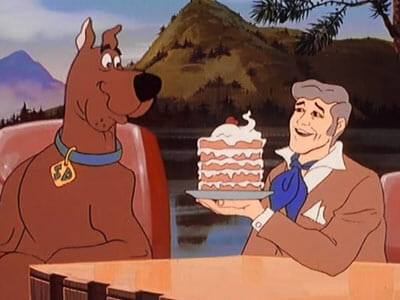 Scooby on The Jackie Carlson Show

Back once again in CJ’s office, we see one more parody (Charlie’s Angels) before CJ finally convinces Scooby and Shaggy to go back to their old show. He takes them to his office balcony which overlooks an enormous crowd of people chanting “We need you Scooby-Doo.” Scooby gives in to them and agrees to go back to his show: “I’ll do it for the kids. For my fans.” Everyone cheers. 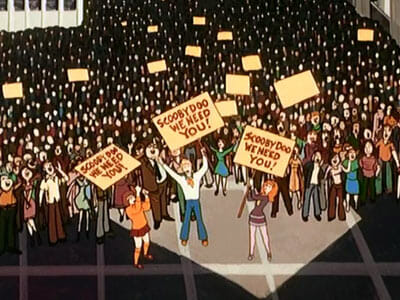 What a way to commemorate Scooby-Doo’s ten years on television. It wasn’t good, but it was interesting to watch. Interesting to know that this exists. 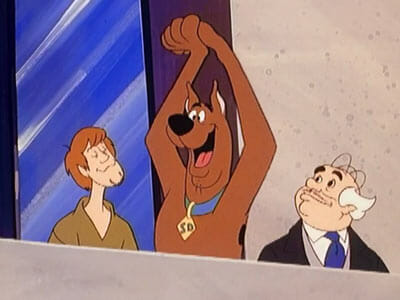 Scooby decides to go back to his show

It was incredibly self-serving, patting the Scooby-Doo franchise on the back so hard it got a bruise. Especially true at the end with all the kids expressing their support for Scooby and being the turning point in persuading him to stay. 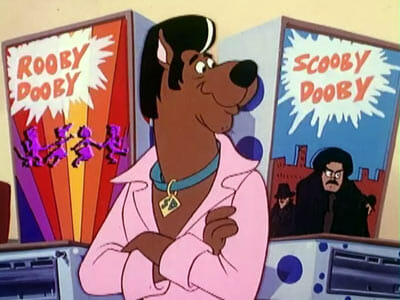 As you can tell from the summary, almost the entire special is made up of parodies of shows and films that were popular at the time it was made. But it just wasn’t funny. Regardless of the parodies, nearly all the jokes are the same: Scooby is clumsy and falls into stuff. 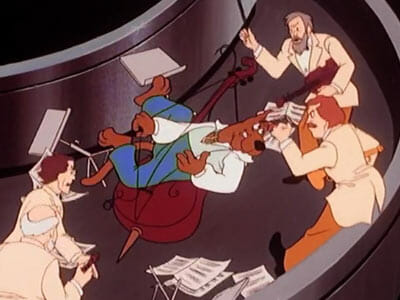 This same gag over and over again

The only thing I remotely liked was the Scooby and Cherie dance scene, which lasts a whopping 1 minute and 39 seconds. Go ahead and watch it here (in Swedish!) and be content with the knowledge you have seen the best Scooby Goes Hollywood has to offer: