Scooby and the gang stumble on a mysterious masked man’s counterfeiting operation,
and puppets. Beware the puppets! They could be anyone…even you. 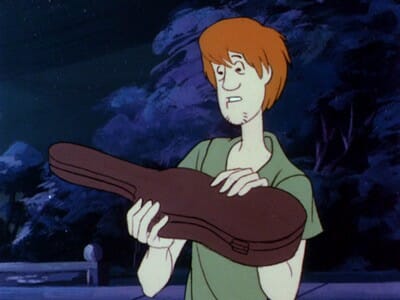 The case is afoot

Like most Scooby-Doo episodes, this one starts on a spooky night. Shaggy and Scooby
stroll through the deserted streets with a box of pizza. They hear a car and think it’s the Mystery Machine, but it’s just some car. It goes over a huge rock in the road and a violin case pops out onto the pavement; Shaggy opens the case and finds it full of money!

Shaggy heads to a nearby payphone to call the rest of the gang, leaving Scooby to guard the violin case all by himself. 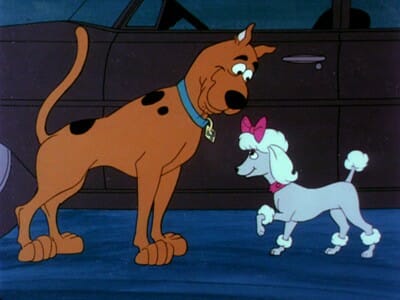 Scooby falls for a trap

The mysterious car, complete with equally mysterious driver, returns. A seemingly injured poodle appears to distract Scooby for a moment, allowing the driver to recover the case then disappear. Then the poodle disappears. Shaggy returns with the rest of the gang and Scooby explains how he lost the violin case.

Daphne finds a clue – a puppet control bar. Fred examines the bar: “Pietro’s Puppets.” Their next stop. On the way, Scooby speculates the poodle was a puppet. Must have been a pretty convincing puppet! As for the money in the violin case, the gang suspects it belongs to counterfeiters. 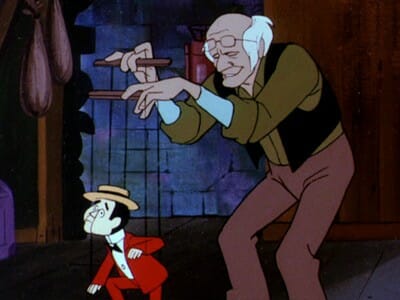 At a theater – the location of Pietro’s Puppets – the gang finds an old man playing with a puppet. Scooby and Shaggy spot a twenty-dollar bill in a dresser. They grab the bill and quickly head back to the Mystery Machine, thinking it’s counterfeit and thus a clue…but it’s not. They just robbed an old man.

The group returns to the theater and sneak backstage for clues. Velma spots a masked man (the mysterious driver we saw earlier) in the stage’s prompter’s box, and the gang follows him into a room full of empty violin cases. 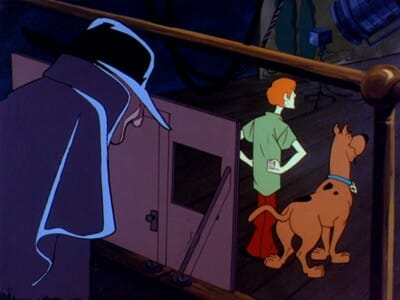 The masked man plans his next move

Attack of the Puppets

The masked guy briefly plays the organ on the stage, then disappears. A viking takes his place, then a pirate, then the poodle from the opening scene. Scooby grabs the poodle puppet, and Velma finds engraving plates for a dollar bill within.

The kids go back to the old man, Pietro, and try to wake him up, but he’s a puppet. A bird puppet suddenly flies in and grabs the plates from Velma. Back to square one. 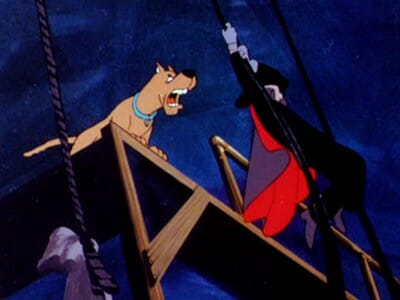 Fred has everyone return to the violin case room to look for more clues. They find one case is actually a secret door to a back room full of printing equipment. The masked man shows up and chases the gang to the end of a hall, where they find a ladder and climb it through a trapdoor back to the stage.

The viking and pirate reappear but Velma tells everyone to calm down and that they’re just puppets. Scooby sees the masked guy up on the catwalk controlling the puppets and uses a sandbag to propel himself upward to catch him. In the end, it turns out the masked man was none other than Pietro, the only other character in this episode. 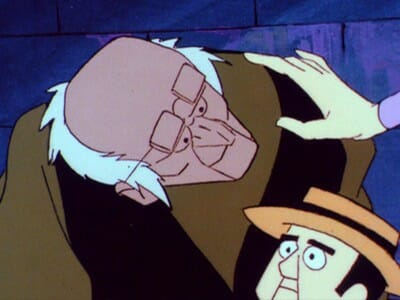 Not much to say about this one. It’s a pretty average mystery. There seemed to be a couple instances of backtracking, with the gang finding a clue, talking about it (or losing it), then immediately returning to where they got the clue.

The use of puppets was a nice touch, but as with the magic tricks in the third episode, falls apart when scrutinized for realism. For one, these puppets had to have been incredibly realistic to fool the Scooby gang. 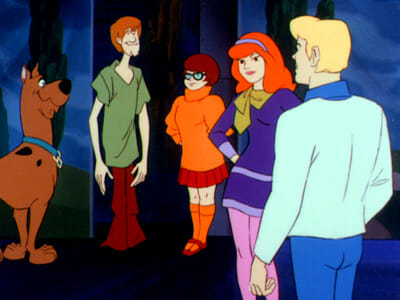 The gang explores the theater

Also, the viking and pirate puppets spoke. If the phantom provided their voices, his position as puppeteer would be betrayed (or did he throw his voice like Barney in that one episode of The Flintstones?), and if their voices came from the puppets themselves as a recording, surely our teenage sleuth heroes could identify them as recordings. Don’t even get me started on the bird puppet.

I did like how a lot of the episode’s first act took place in the middle of the city. That’s not a location we see too often in these early Scooby-Doo shows.