While visiting their friend Sharon, the Scooby gang finds themselves pulled into a mystery involving a blue-skinned ghost. 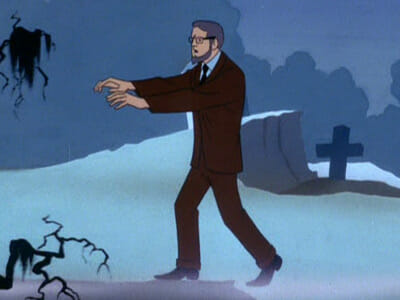 Uncle Stuart is drawn to a mysterious voice

The Scooby gang’s on their way to visit their friend Sharon Wetherby, who lives in a huge creepy mansion (natch). As the Mystery Machine pulls up into the driveway, they find a strange man walking with arms outstretched outside…but think nothing of it. 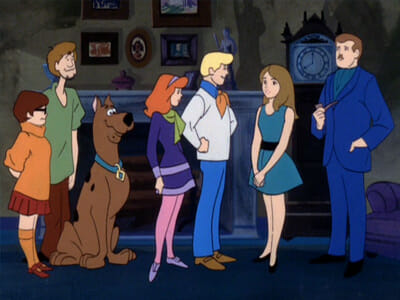 The Scoobies visit their friend Sharon

In the mansion, Sharon and her father tell the gang that they’ve been hearing strange noises the past couple days, and that her Uncle Stuart has suddenly gone missing. Daphne wonders if that’s the strange man they saw earlier (it is). 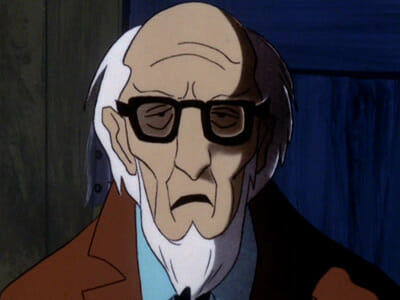 Everyone goes out to where they last saw Stuart, heading to the neighboring Kingston mansion. Sure enough, he’s there…only he’s aged. A lot! Now a wrinkled old man, Stuart tells the tale of how he heard voices beckoning him to the Kingston mansion, where he was confronted by the blue-skinned ghost of Elias Kingston!

The ghost demanded the Wetherby fortune be handed over to him, its so-called rightful owner, by morning. Otherwise, the entire Wetherby family will be drained of their youth, just like Stuart. 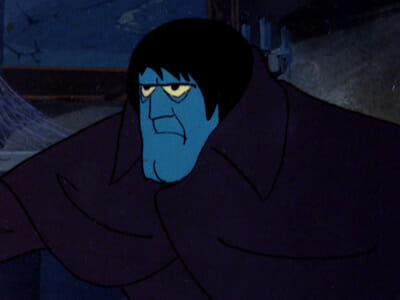 Beware the Ghost of Elias Kingston!

While Sharon’s dad leaves to get the sheriff, Stuart is once again summoned by the mysterious voice, and leaves in a trance. Curiously, Sharon also disappears (kidnapped and stowed away by Elias Kingston).

The Scooby gang searches the Kingston mansion high and low for Stuart and Sharon, finding only the skeletal remains of Stuart, a live bulldog, and a book on crystallomancy. The book leads to a pointless comedy scene where the Scooby gang goes into town to visit a nearby swami. 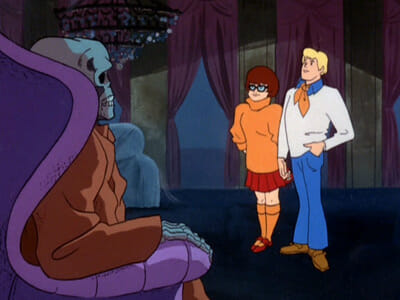 The gang returns to the mansion, rescues Sharon offscreen, and uses images from a projector to scare Kingston and catch him in a net. 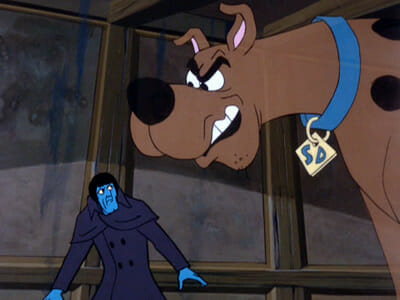 A giant projection of Scooby scares the ghost

The Ghost of Elias Kingston is revealed to be Stuart. “Uncle Stewart, why did you do it?” asks Sharon. Before he can reply, Sharon’s father speaks up: “Well, I guess he can explain it to the sheriff when he gets here.”

What?! That’s it? One assumes he wanted the fortune because he’s a greedy jerk, but there’s something about Sharon’s father being quick to interrupt Stuart that has me wondering… 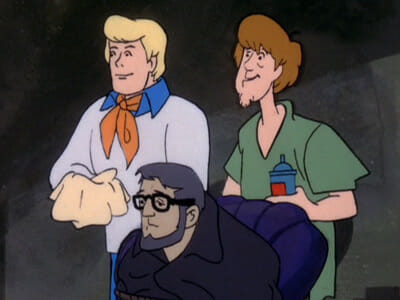 Uncle Stuart, how could you?

I was looking forward to watching this episode because it’s one I remember watching long ago. I learned the word “trance” from this episode, so it has to be worth something, right?

The discovery of Stuart’s “skeleton” is an especially vivid, memorable image – a semi-frightening showcase of death that’s all-too absent in Scooby-Doo. The Ghost of Elias Kingston, the villain of the piece, is memorable, most likely due to the blue skin and willingness to punch people through curtains. 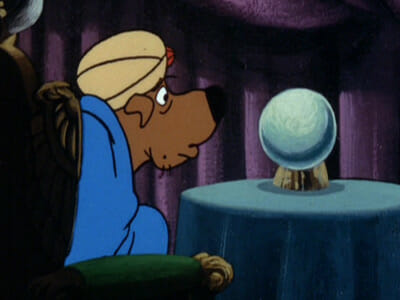 While cute, the swami scene was totally unnecessary

But does the episode hold up? Not really. There were several holes and instances of lazy writing, chief among them Sharon’s offscreen rescue, and the fact that there was no motive given.