The Scooby gang explores a castle haunted by a phantom. 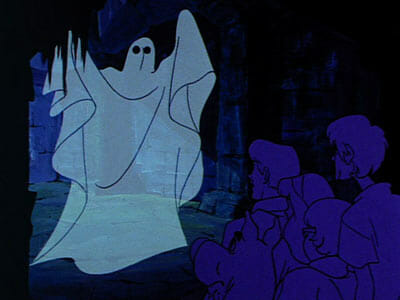 Boring monster in this episode

We start the episode on an island – Haunted Isle – in a castle – Vasquez Castle. Inside, a phantom…er, a guy in a sheet…looks through a telescope. 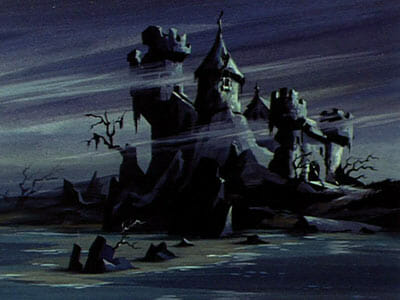 Nearby, Freddy, Daphne, and everyone else is boating when a sudden fog appears. Velma takes a moment to try to explain how fogs are formed, but no one cares. Instead, Shaggy makes a Super Shaggy Sandwich, complete with sardines, marshmallows, and chocolate. Predictably, Scooby eats it all, leaving Shaggy with absolutely nothing. Not even an olive. 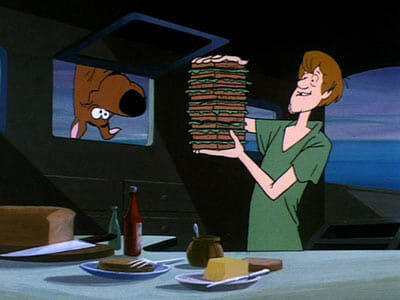 Poor Shaggy doesn’t get even a bite of his sandwich

The boat hits Haunted Isle and the kids head for Vasquez Castle to get help. On the way, Scooby finds a map on a crab, which he hands to Freddy. On the underside of the map is a warning to get off the island. 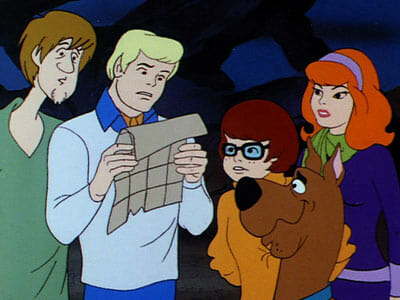 Obviously the teen sleuths disregard the warning and enter the castle, where they’re shadowed by the phantom we saw earlier. Daphne falls through a trap door, sliding down into a dungeon, but she quickly catches up to her friends. 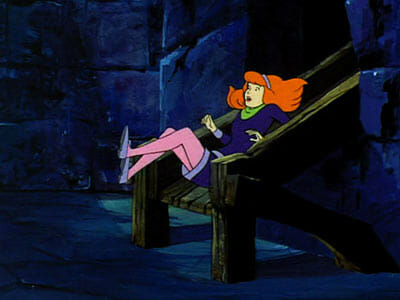 Daphne falls down a trapdoor

Shaggy asks for a ham sandwich, which conveniently appears hovering in front of him, as does a jar of mustard. The phantom also shows up and makes noises to scare everyone. 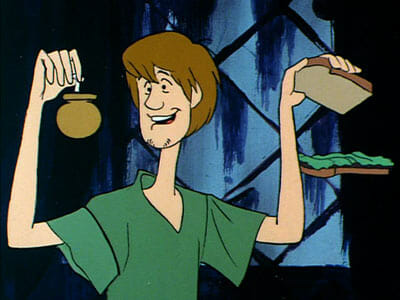 What is it with Shaggy and sandwiches?

“There’s a very logical explanation for all this.” Velma says, “The place is haunted.” 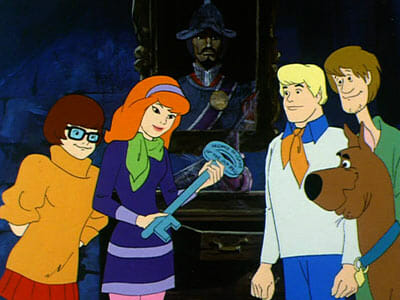 Daphne finds a big-ass key that belongs to the phantom: The phrase “Second passage of the old bell” is inscribed on it. Velma figures out that the “passage” refers to a book, The Old Bell, which they find in the castle library. The key word in this passage: catacombs. 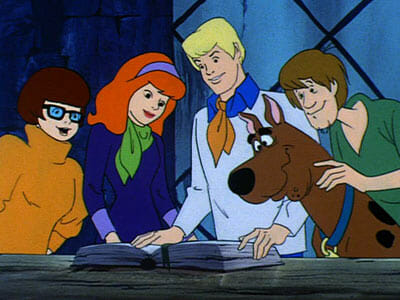 Reading is fun and educational!

Down in the catacombs, the teens use their key to unlock a door. Freddy gets Scooby to scout ahead. Scooby refuses initially, and it takes three Scooby Snacks to change his mind. Three! This is only the third episode and he’s already asking for more than one. 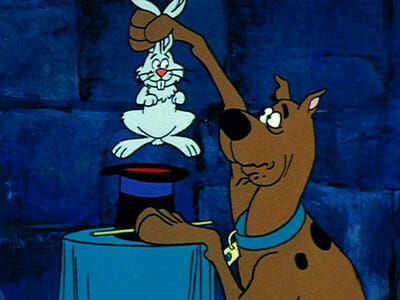 Where did that rabbit come from, anyway?

After Scooby gives the all clear, the rest of the gang enter the room to find a whole bunch of magic stuff, like a top hat and wand, a magic carpet, etc. The phantom appears again and tells the kids they’ll pay. Shaggy offers to give him money. Funny, actually. 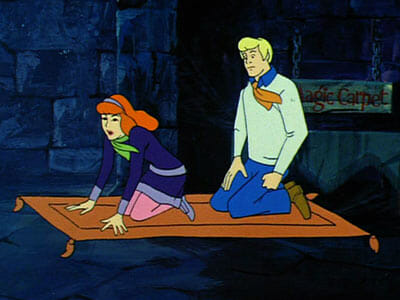 There better be a good explanation for this

After some antics with the phantom and the magic stuff, Fred gets everyone together for yet another overly complicated plan to catch the phantom, this time involving a crossbow, cannon ball, and see-saw. 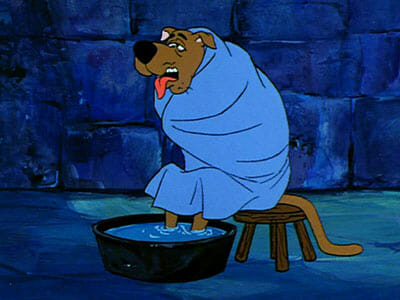 Scooby is to be the bait that lures the phantom into getting caught in the trap. But for some reason he has to dress up as a human because otherwise the phantom won’t chase him (?). Scooby puts on a trenchcoat, fake moustache, and bowler hat. He looks like a flasher. Scooby confronts the phantom in a Western standoff, except instead of pulling out a pistol, Scooby just makes weird faces. The phantom chases Scooby, who accidentally triggers the trap and gets caught, but it works out in the end because he falls and lands on the phantom. 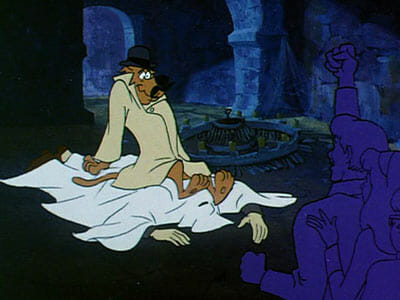 The authorities arrive and Freddy pulls off the phantom’s costume to reveal Bluestone the Great, a magician, or rather, ex-magician wanted for several unspecified crimes. He was after Vasquez’s treasure, said to be buried under the castle, and was dressing up as a phantom to scare people away so he could have the treasure for himself. 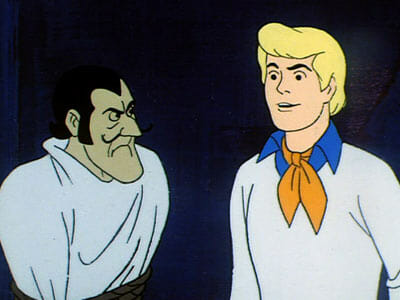 Velma explains that all the magic we witnessed in this episode was caused by trick mirrors, pulleys, and a projector (for when the phantom passed through walls). They don’t explain some of the other wild tricks we saw, such as the rabbit in the hat, the floating sandwich, and the talking skull, but whatever. 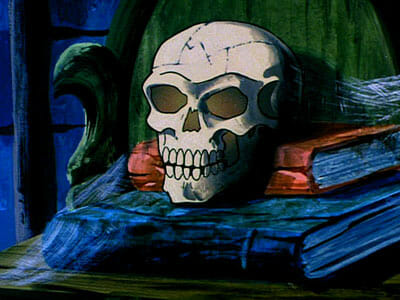 This episode had a pretty good atmosphere, with the foggy island and haunted castle, but ultimately falls a little flat in execution. For starters, the phantom was pretty lame, and the identity, and his motivation, was even lamer. I don’t even think they mention the Vasquez treasure until he’s unmasked, so it seems to come out of nowhere. 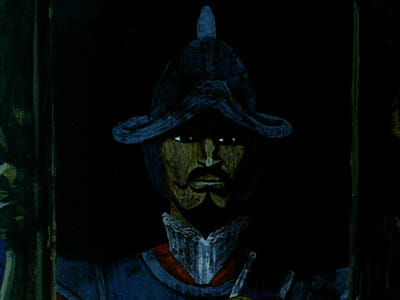 Lots of filler in this episode, with Daphne falling down a trapdoor not amounting to anything (other than keeping her out of play for a couple minutes), and the scenes with the gang playing with the magic stuff. 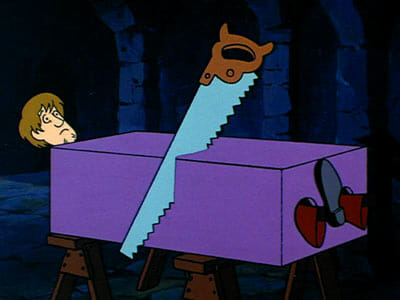 Could this be the end of Shaggy?

I was surprised that Freddy lost his cool a couple times in this episode and showed how frightened he was, but I liked this rarely seen side of him. On the converse side, we witness some bravery from the normally cowardly Shaggy and Scooby in a scene where they willingly chase after the phantom. Maybe this episode took place in Bizarro World. 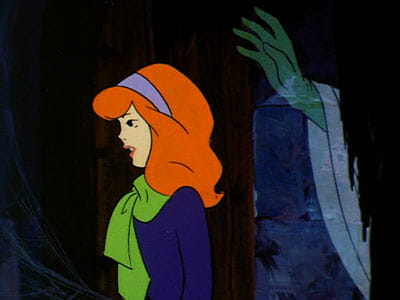 Recognize this shot from the intro?