The gang finds an unconscious bank guard who gives them a blank piece of paper sought by the Creeper. 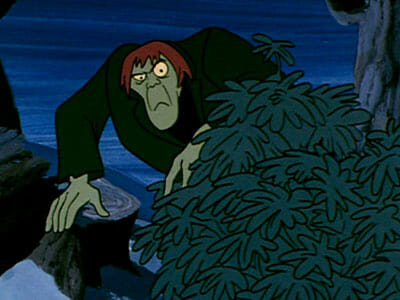 The Creeper makes his entrance

The episode starts with some guy in a car driving on the road. A log blocks his path. Was this shot later reused in the second Batman crossover episode? Probably. I know I’d reuse that shot because if you need to draw a log blocking a road, why waste time drawing another one that will look exactly the same? 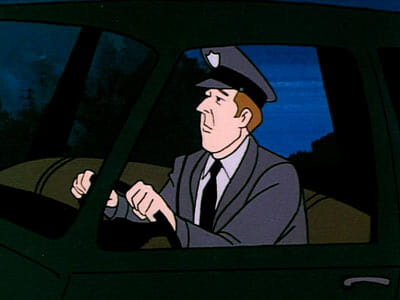 Anyway, the guy stops his car and gets out to move the log. Suddenly we see a zombie thing hiding in the bushes…the Creeper!

We switch over to the Mystery Machine, where Fred, Daphne, and the other teens are heading to a barn for a school dance. Is this an official, school-sanctioned dance or what? Because it sounds a little dubious to me. Shaggy’s looking forward to the buffet, specifically chocolate-covered corn on the cob. 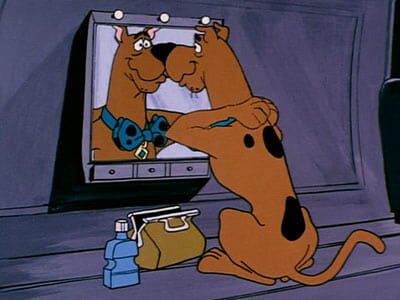 The Mystery Machine’s occupants stumble on the guy we saw earlier. He’s lying on the ground in bad shape; Fred immediately recognizes him as a bank guard. The guard gives Fred a blank piece of paper and mutters the ominous phrase, “The flame will tell the Creeper,” before falling unconscious. 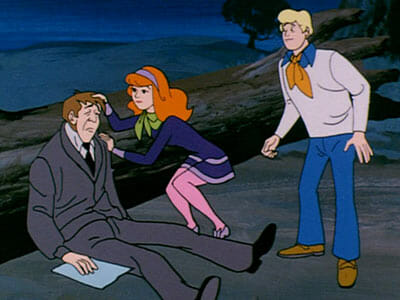 The gang finds a man on the side of the road

Scooby finds another piece of paper by the car that has the address of the bank president. The Mystery Inc. team heads over there to drop the guard off; the president tells them that the Creeper has robbed his bank several times, and does so without opening any doors. Fred doesn’t care about this. He just wants to go to the dance. 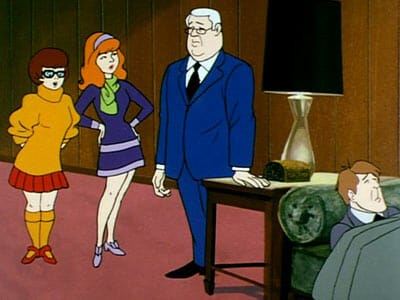 At the bank president’s house

The dance starts off well, though it’s not quite as crowded as one might expect a high school barn dance to be. The Creeper crashes the party and a long chase scene set to a musical number (Daydreamin’ by Austin Roberts) ensues as he tries to steal the blank paper from the Scooby gang. 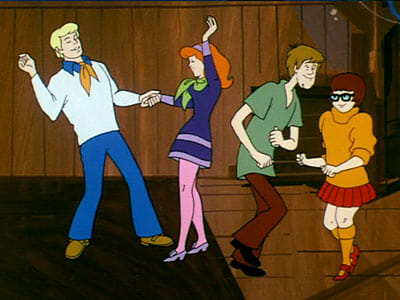 We get a brief respite where Scooby and Shaggy hide in a hen house. A newly born chick hatches from an egg and latches on to Scooby, thinking he’s its mother. The chick even picks up the habit of barking like a dog. 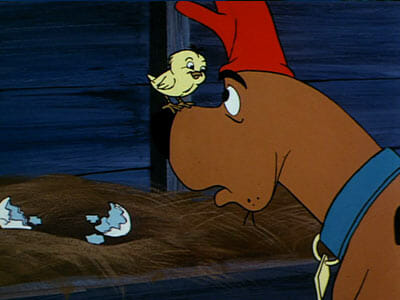 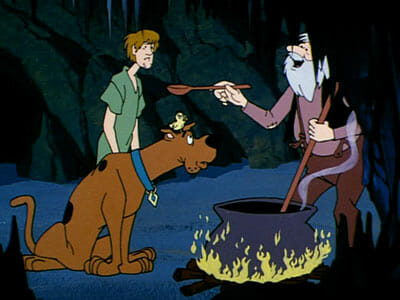 All he wanted was someone to cook for

We get another chase scene with the Creeper that ends with everyone, sans Scooby and the chick, getting caught in a baler. The Creeper gets unmasked and is revealed to be the bank president, Mr. Carswell. He was stealing from his own bank and concocted the Creeper guise so he wouldn’t take the blame. The reason he was after the guard was because the guard had photographic evidence (the blank paper was really a photo) showing Carswell’s guilt. 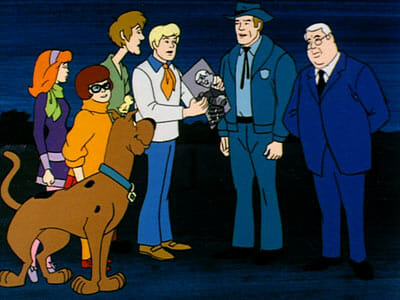 The culprit is caught

The Creeper is one of Scooby-Doo’s most recognizable villains. Nine times out of ten, if you ask a random person to name a random Scooby-Doo villain, chances are they’ll name the Creeper (if they answer you at all, that is). But what is it that makes him so memorable? It could be his simple but effective design, his concise yet mysterious name, or the fact that no one knows what he is. 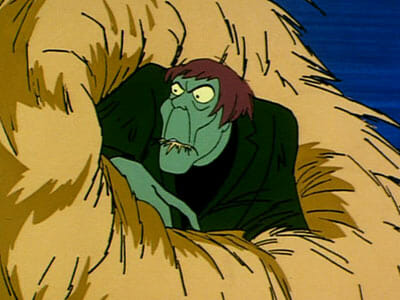 The central plot about the bank and Creeper’s identity was the episode’s strongest point, but I felt the chase scenes in this episode went on for too long. 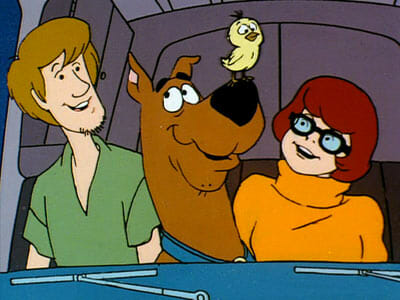 I like the baby chick, but all the gags with it thinking it’s a dog were a bit overdone. We hear the laugh track every time it opens its beak to bark. It’s a joke repeated ad nauseum that wasn’t that funny to begin with. What is funny is the fact that when Fred, Daphne, and Velma first see the barking chick, they don’t consider it weird or out of the ordinary. Traveling with a talking dog will do that to you.

Scooby Snacks: +1 (eaten by the chick)