Scooby and the gang investigate an alien spaceship sighting in an abandoned airfield. 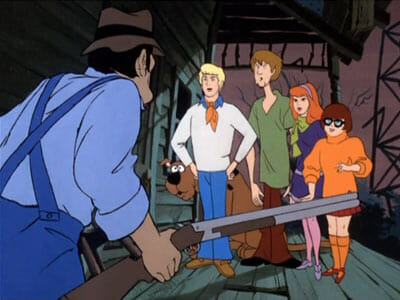 “Get off my property!”

The episode begins with the gang in the Mystery Machine driving on a dimly lit road. They run out of gas and seek help at a shack conveniently located in the vicinity. The cranky farmer who lives there gives the gang a cool welcome, believing they’re reporters at first; he’s been bugged a lot lately due to the alien spaceship that’s been sighted nearby.

While a chicken confuses Scooby’s tail for a worm and bites it, the rest of the gang finds glowy footprints… 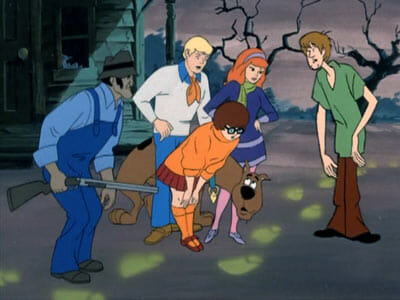 Back in the Mystery Machine (now with gas provided by the farmer), the gang sees the alien spacecraft and follows it to an abandoned airfield. Fred splits everyone up to see if they can find the alien, which is also allegedly a ghost. 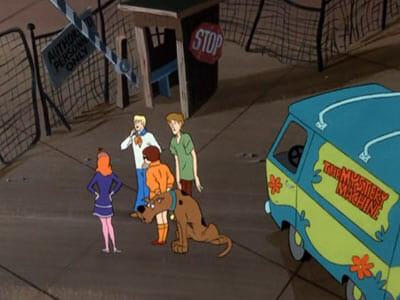 The gang arrives at the abandoned airfield

Scooby and Shaggy are the first to run into the ghost, the Spooky Space Kook, and narrowly escape its grasp. 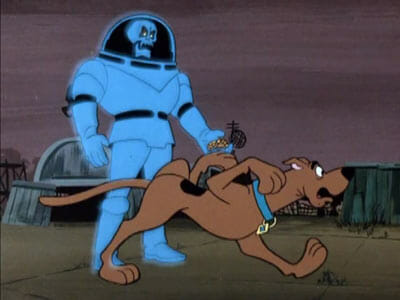 Elsewhere, Fred, Daphne, and Velma search the airfield for more clues and enter a machine shop. The Kook pulls down a lever causing a hook to grab Fred and pull him to the ceiling, suspending him in the air. “I feel like a side of beef,” he says. 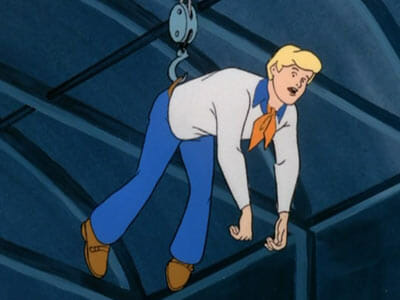 Velma and Daphne find Scooby and Shaggy and take them to the machine shop, where they bring Fred back to the ground. The Kook shows up again, scaring the kids and splitting them back up into two groups.

Fred, Daphne, and Velma find a day-old newspaper with glowy spots (like the footprints) in a random barrel. “I don’t get it,” says Fred, “why would a ghost from outer space be reading yesterday’s newspaper?” 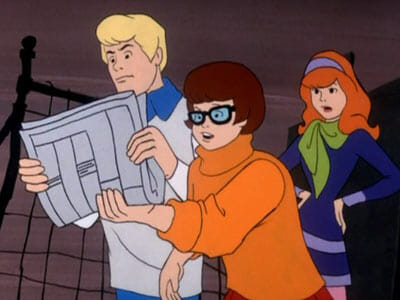 Fred, Velma, and Daphne find a newspaper with glowy spots

Meanwhile, Shaggy and Scooby raid the airfield’s mess hall for food. “Like, how come a ghost from space keeps chicken and ham around?” inquires Shaggy. The Kook shows up once again and we get another chase scene that ends with Shaggy and Scooby reuniting with the others once again.

Scooby finds an old jeep outside with flat tires that moves on its own with secret tires underneath. Then some doors open up to reveal an army of Space Kooks. This scene is actually a little suspenseful. 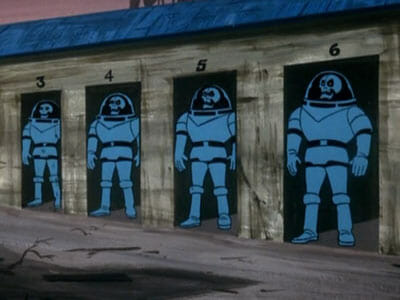 Shaggy and Scooby flee into a building and climb up a ladder into a room with a projector, microphone, and some audio equipment piped into the airfield’s audio system. The Space Kook finds Scooby and Shaggy, and they jump out the window with a parachute. 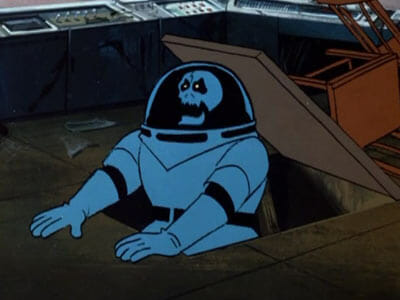 The farmer guy from earlier returns with the sheriff, and the Space Kook tries to escape by running into a wind tunnel. Fred activates the tunnel and it blows off the Space Kook’s costume, revealing his true identity as the farmer’s neighbor! Wait…who?

He learned the Airforce was going to reopen the airfield and would need more land for jets; if he scared everyone away, he could buy their land for cheap and sell it to the Airforce at a higher price. All this work and commotion just to make a couple bucks.

The space ship we saw was a projection (as usual), the Space Kook army was made up of dummies, and the old jeep was remote-controlled. 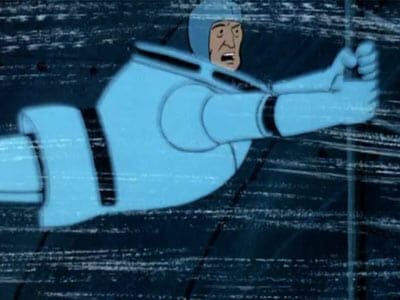 The Kook’s costume gets blown away

Another “just okay” episode of Scooby-Doo. It’s not the kind where you can play along, follow the clues, and guess the monster’s identity – the first time we see and even hear about the farmer’s neighbor is when he’s unmasked.

There were also one too many chases and wasteful scenes that didn’t really affect anything. Like, what was up with the self-driving jeep? Was it just another prop to scare people? 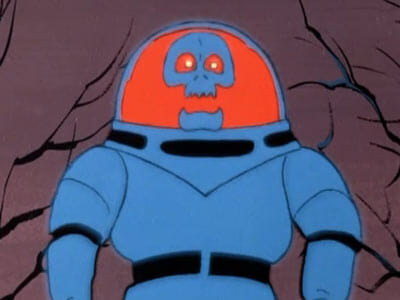 Then Fred gets caught on the hook, then gets down soon after as if the whole thing never happened. I will say that I liked seeing Fred emote for once in that scene. Usually he plays his role of stoic leader to the letter, but here there was a hint of indignation in his voice that made him seem human. Subsequent Scooby-Doo series will do a more effective job of giving Fred actual character and personality. 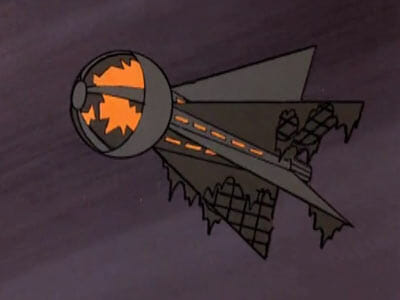 On the plus side, it had a nice, creepy atmosphere. The monster had a very memorable design and an unforgettable high-pitched squeal of a laugh; likewise, his space ship looked unique – shaped like a badminton shuttlecock rather than the typical flying saucer.