Scooby-Doo and four others must spend the night in a haunted mansion to inherit a million dollars from the late Colonel Sanders’ estate. 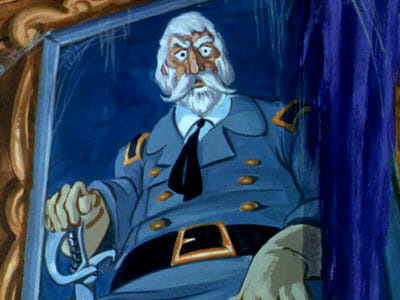 Colonel Beauregard Sanders has died, but has named Scooby as one of the five beneficiaries of his will (Scooby saved his life years ago); the other four are family members with names so funny I have to list them all – Cousin Simple, Nephew Norble, sweet Cousin Maldahyde, and Cousin Slicker. All they have to do is spend the night at the Colonel’s haunted mansion, and they’ll receive a share of one million dollars. 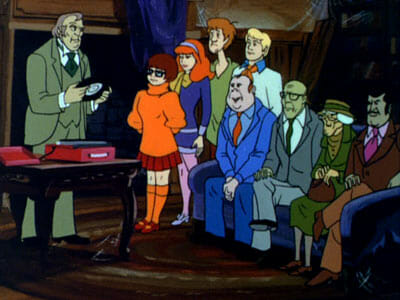 All the Sanders’ potential inheritors

Predictably a ghost – well, a pair of ghosts this time – show up and spoil the party. The Colonel’s heirs start disappearing and only Scooby is left. 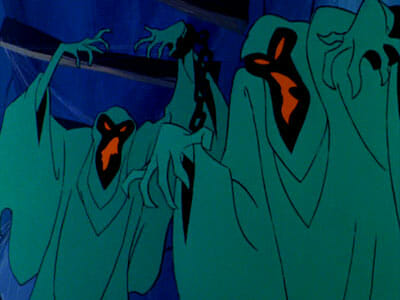 The gang finds an organ in one of the rooms with a note that says “Feed the organ, and watch the floor.”

“If anyone’s gonna to get fed around here, it’s gonna be me,” says Shaggy. But Velma deduces instead that the written note refers to the music notes F-E-E-D on the organ. Scooby plays the four notes and a trapdoor on the floor slides open, leading down to a secret basement. 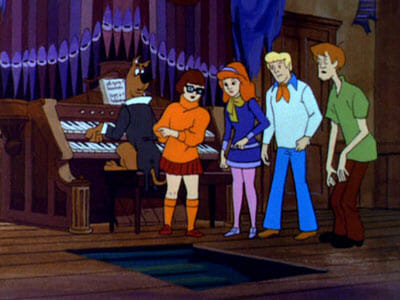 The organ opens a secret door to the basement

The gang runs into the ghosts again, but also find four coffins with the four missing heirs trapped inside, and a fifth, empty coffin for Scooby! Fred comes up with a plan to capture the ghosts that involves trapping them in a washing machine. The plan, of course, goes awry and causes tons of chaos, but in the end, both phantoms are caught and revealed to be Cosgood Creeps and Mr. Crawls, Colonel Sanders’ lawyers. Their goal was to scare everyone away from the mansion so they’d collect the million dollars for themselves. 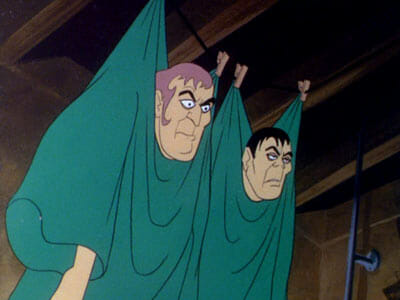 Since Scooby is the last inheritor standing, he receives the one million dollars…but it’s Confederate money and isn’t worth anything. At least until he can sell it on eBay. 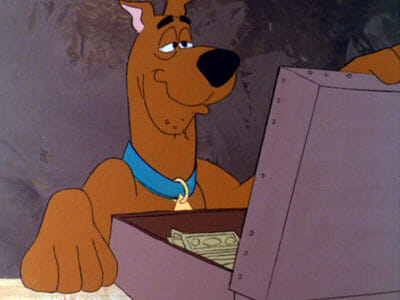 This episode had a pretty interesting premise – an homage to House on Haunted Hill. There are a couple good scenes, like the opening with the beneficiaries listening to Colonel Sanders’ record and the organ puzzle. But other than that, it was a typical, formulaic Scooby-Doo episode with chase scenes in a castle and an underground cavern, and a trap that backfires but ends up working anyway. Take it or leave it.