I’m sure you know exactly who and what Scooby-Doo is, but let’s pretend for a moment that you don’t:

Scooby-Doo, Where Are You? was a cartoon series by Hanna-Barbera about a group of teenage paranormal-mystery solvers (Fred, Daphne, Velma, Shaggy) and their talking dog, Scooby-Doo. The show’s popularity spawned countless follow up Scooby series and movies, including several live action films.

Apart from a couple exceptions, there has been something Scooby-Doo related in production every year. EVERY YEAR since the debut of the first series in 1969!

Note the lack of question mark

Scooby-Doo‘s success also gave rise to a multiple “clone” shows in the ’70s, which were also about groups of young detectives, only with the talking dog gimmick replaced by something equally extraordinary, like a talking car, a talking shark, and a ghost from the Revolutionary War. I know I botched the parallelism in that list, and I don’t care.

But this episode, What a Night for a Knight, is the very first. The progenitor of the mythos that was, is, and will always be known as Scoobert Scooby Dooby Doo. 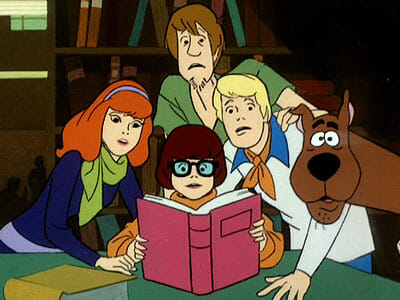 A man drives down a lonely road at night with a crate containing a suit of armor that once belonged to “the Black Knight.” This man is Professor Jameson Hyde White, and he’s come all the way from England to transport this armor to a museum. I sure hope nothing bad happens to him along the way. 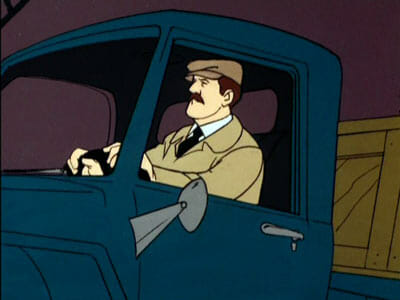 Nearby, Scooby and Shaggy walk home from seeing a film, Star: Dog Ranger of the North Woods, twice. They come across the professor’s vehicle but the professor is nowhere to be found! Instead, all they find is the suit of armor, curiously placed in the passenger seat. 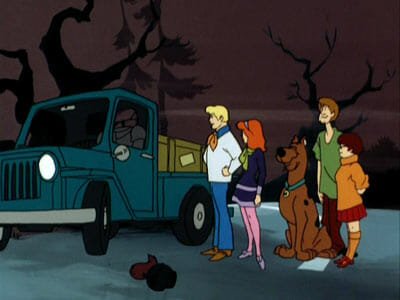 Shaggy calls the rest of the gang to check out the scene; they arrive and Daphne finds a delivery slip that says “Deliver to the County Museum.” 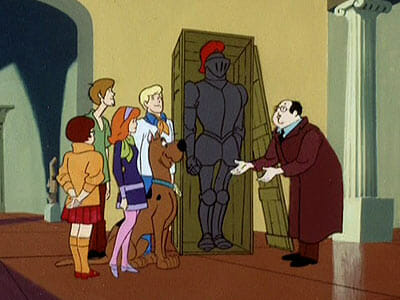 The armor is delivered to the museum

At the museum, the curator Mr. Wickles thanks the gang for finding the Black Knight armor. He’s a bit dismayed that Professor Hyde White is missing, and speaks of a legend that on the night of a full moon, the armor comes to life. Hey, it was a full moon the previous night! Hmm… 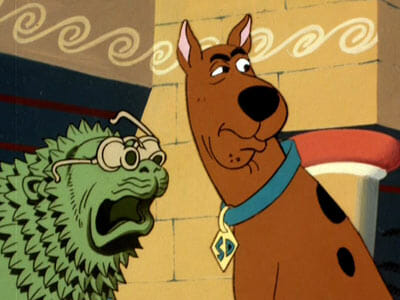 The gang leaves, and on his way out Scooby grabs a pair of weird glasses he finds on a museum piece. Fred notices the glasses in the Mystery Machine and takes everyone to the library to see if they can find more information on them – turns out they were made in England. 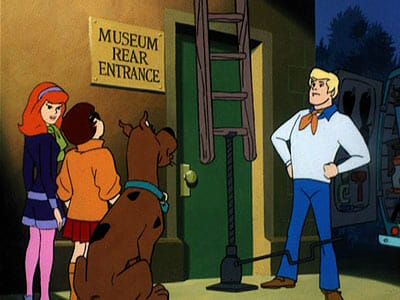 Night at the Museum

Fred and the others think the glasses definitely belonged to the missing professor, and at night they break into the museum to investigate. The gang splits up, and Scooby, Shaggy, and Velma are the first to run into the animated Black Knight armor. 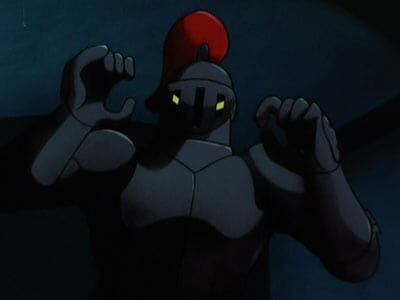 Velma’s glasses get knocked off in the ensuing chaos; she mistakes the groans of the Knight for a sick Shaggy, and after getting her glasses back on, shoves a spoonful of cold medicine into Shaggy’s mouth. 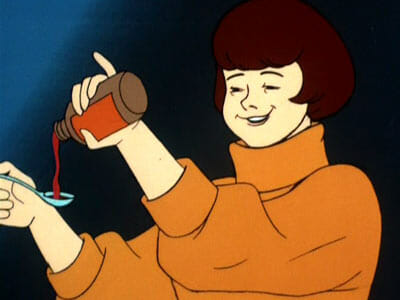 After losing the Knight, Shaggy notices one of the paintings on the wall is missing, but when he goes to fetch Fred and Daphne, the painting reappears. Daphne finds a trail of red paint leading to a sarcophagus that, once opened, reveals a hidden room. 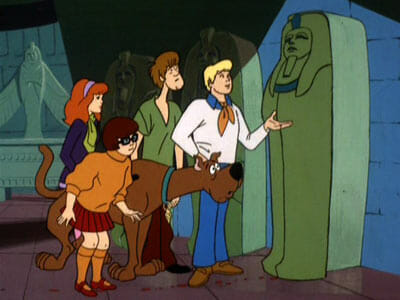 The gang finds a secret room behind the sarcophagus

Inside the room are paintings and paintings of the paintings (fakes). The Knight arrives and chases out the teens. Shaggy and Scooby get into an old biplane that they accidentally power and crash into the Knight, now revealed to have been Mr. Wickles. Scooby and Shaggy hide in a biplane

He was making reproductions of famous art pieces so he could sell the originals on the black market. The only person who would have been able to tell the difference was Professor Hyde White, which is why he was kidnapped. 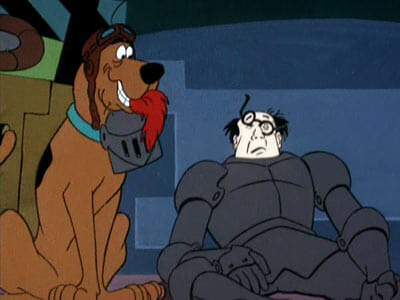 It was Mr. Wickles…

But where is the Professor now? Scooby finds him tied up and covered under an art piece. 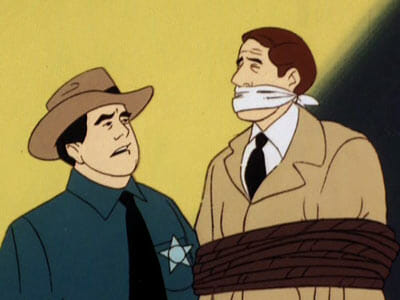 This episode was actually a good start for the franchise and it didn’t have any of the first episode “weirdness” that crops up in most shows. It pretty much hit every Scooby-Doo beat and trope, with loads of puns and physical comedy, Velma losing her glasses, and Scooby eating Scooby Snacks. I found it funny that in the first episode, Scooby is already greedy, asking for two snacks instead of one. Good for him! 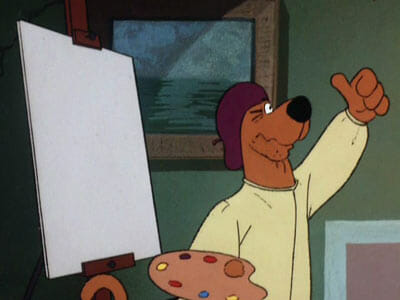 Scooby tricks the Knight by pretending to be a painter

There were, of course, a few plot holes and contrived moments, like Wickles leaving the suit of armor unattended at the beginning, the careless red paint trail, and the fact that Wickles could even maneuver himself the way that he did in that armor! The guy’s not in the best of shape, I’m sorry to say. 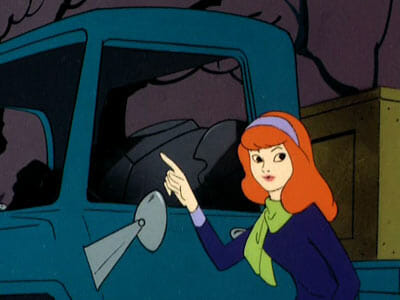 What was his plan here?

But what made up for these flaws was the episode’s moody atmosphere. Dark, dreary colors and eerie shadowy lighting, especially in the museum scenes. 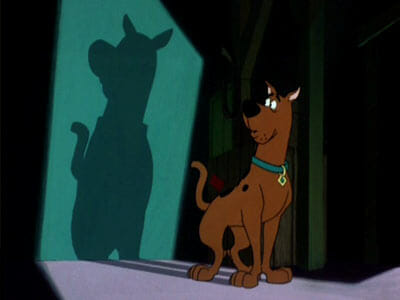 This episode had a pretty good atmosphere

If you wanted to introduce someone to Scooby-Doo or perhaps you wanted to revisit it and only had time for one episode, you can’t go wrong with this one. 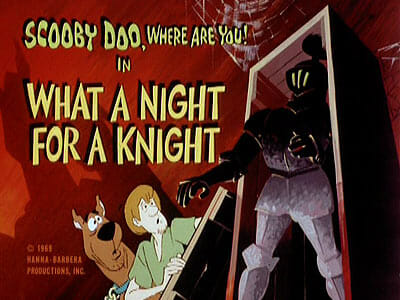