A group known as the Headhunters have been kidnapping football players, but to what end? SuperPro’s going to find out!

A hole in one…oh, wrong sport

Phil and Ken watch a game between the New York Giants and the Miami Dolphins, when two arms suddenly burst out of the ground, grab Lawrence Taylor, and pull him under! Phil and Ken climb through the fresh hole in the field and discover that it leads outside to the parking lot.

They see a trio of really huge guys in strange costumes (the Headhunters) loading Lawrence Taylor into a van. Ken distracts them long enough for Phil to change into his SuperPro costume, but its all for naught as SuperPro gets his ass handed to him and the van gets away.

Later, Phil watches the news as Jane tends to his injuries, and hears that a total of 21 football players have been kidnapped. He works out that each person kidnapped fills a different position on the field, and there’s only one position missing: quarterback. He figures his buddy Ron Macedon is the next target. 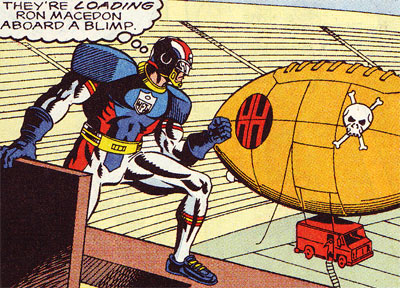 You don’t see that every day

Phil heads to Rob’s stadium and finds his hunch was spot on; the Headhunters arrive in a van attached to blimp and pick up Ron. Phil changes to SuperPro, accidentally pops the blimp with his cleats, then hitches a ride on the bottom of the van once it hits the ground.

Who are the Headhunters?

The van heads to yet another stadium where all the kidnapped players are being held. We learn that Headhunters are all NFL rejects who don’t play by the rules – they’re led by some coach and his daughter. 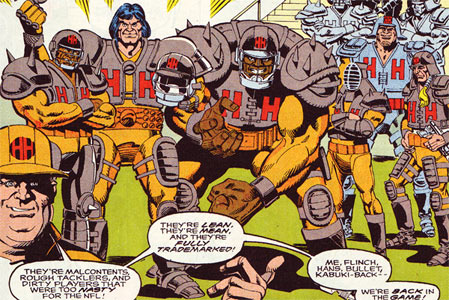 SuperPro is found and taken prisoner. The Headhunters coach explains to him that all the kidnapped players represent the best of NFL; the plan is to get them to play his team, and when the NFL guys lose, it will prove his point that the Headhunters are the superior players after all. Well. Okay…

The game starts, but SuperPro picks his lock and escapes. With the help of the kidnapped NFL football players, he defeats the Headhunters, but the coach and daughter escape. 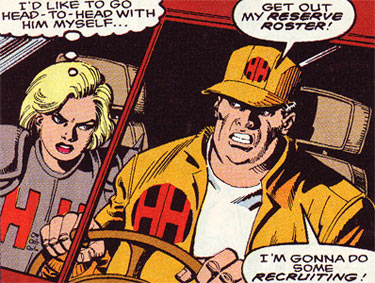 The Headhunters coach and his daughter escape

Such an absurd story but still entertaining in a crazy way. It does sort of reuse the same plot as issue 3, with someone wanting to get revenge on the NFL for being rejected, but each of the Headhunters were unique with different powers, so the fight scenes were more interesting. Also whoever wrote this issue kept kept spelling “kidnapped” with one “p” and while it’s technically not wrong, it weirded me out each and every time I saw it.

NFL players vs. The Headhunters

The cover made a big deal out of Lawrence Taylor being in this issue, but he barely shows up. He’s in like two panels.