Galactor uses mini-robots to rob a bunch of gold bars from a bank; the Science Ninja Team must sneak into Galactor’s base to get them back. One of the titular mini-robots

It’s night at the World Bank. Not a creature was stirring, not even a…wait a minute! A giant drill breaks out of the floor, and out come two mini-robots. One fires a laser from its forehead and melts the door to a very large vault; they pilfer the sparkling gold bars within.

On board the God Phoenix, Dr. Nambu briefs the Science Ninja Team about the bank robbery. Naturally, he believes Galactor is responsible. Gatchaman’s mission is to find Galactor’s base, which is on one of the many islands in the Barelli Sea, and recover the gold bars. 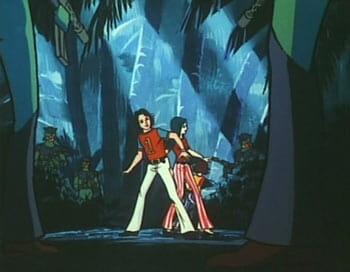 The base is here, all right

Ken, Jun, and Jinpei ditch the bird costumes and check out one of the islands, where they’re ambushed by Galactor henchmen and taken prisoner. Ken and Jun wink at each other. Looks like everything’s going according to plan.

The God Phoenix sits on the ocean floor. Somehow on the monitors, Joe and Ryu are able to see Ken, Jun, and Jinpei being led by the guards inside the Galactor base. Dr. Nambu orders Joe and Ryu to recover the gold bars while Galactor is distracted by the other three.

In the base, we see the Galactor commander is none other than Piccolo, who managed to survive the previous episode. He casually interrogates the captured Gatchaman; they aren’t tied up, in a cell, or surrounded by guards. 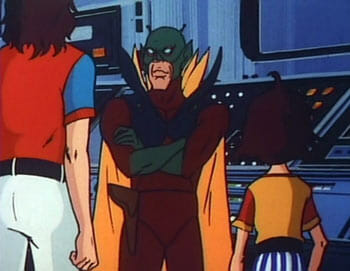 “We don’t have to tell you jack,” says Ken. Piccolo orders one of his officers to activate the island’s surveillance cameras, one of which picks up the God Phoenix. Neither Piccolo nor his men are able to identify it – he must not remember the last episode.

Outside, Joe tries to find an entrance to the base. A piece of the rock face slides out revealing a missile aimed at the sea. In the God Phoenix, Ryu is sound asleep and can’t hear Joe’s attempts to warn him. 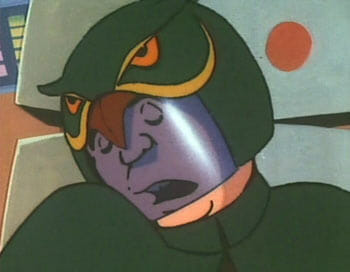 Ryu, sleeping on the job

The missile is launched, but Ryu wakes up at the last second and moves the God Phoenix out of the way just in time.

In the base, Piccolo deploys the micro-robots, called Micros, to take Ken and the other two to a gas chamber to be executed. Yet, Piccolo makes a point to say the robots are equipped with “powerful, man-killing lasers.” Why not just have the prisoners executed on the spot? Having the robots escort them to another part of the base will give them an opportunity to escape.

Sure enough, at the gas chamber, Ken and the others transform into their bird styles and destroy the robots. Piccolo and his guards rush in – I guess it wasn’t a long walk from the control room. The three ninjas dispatch the guards as easily as the Micros, and they run through the base.

This causes enough commotion for Joe to sneak around unhindered. He finds the gold bars, then rushes back to the God Phoenix to get his car to transport them out. 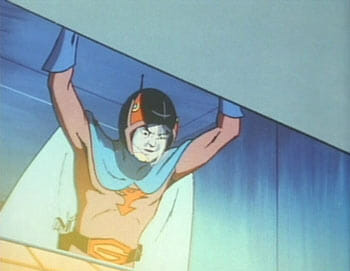 Berg Katse is unhappy with Piccolo and orders him to transport the gold bars to headquarters. The God Phoenix detects Piccolo’s submarine, and Joe predictably prepares a Bird Missile. Ken stops him, “Joe, what are you doing? We can’t fire those without Dr. Nambu’s permission.” Please? Just this once? Joe, you fired thirty four last time! Joe fires a missile, but it misses.

Piccolo orders the Micros to surface the submarine. Their angle of surfacing is so steep, that the containers containing the gold bars break loose, spilling them everywhere. Piccolo discovers that the gold bars he has are all fake, thanks to Joe.

Fake? Was this always the plan? Otherwise, what was Joe doing with crates full of fake gold bars? Berg Katse comes on the monitor to see Piccolo’s failure and orders the Micros to self destruct. Piccolo’s submarine, along with the base, is destroyed. 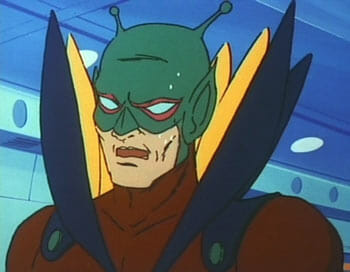 This episode wasn’t bad. It has a lot of things going for it: all the main characters have something to do, there’s plenty of drama (Ryu being asleep when the missile gets fired, for example), and most importantly, like the last episode, we get a unique, non-giant monster enemy in the form of the Micros.

My only complaints, really, are Piccolo’s stupidity (which is understandable, since if he was a capable commander, 3/5 of the Science Ninja Team would be dead in just the sixth episode) and the contrived ending with the fake gold bars that Joe happened to have. Were they really necessary? The ending would have been the same without the switch. It actually led to confusion when we see the crates full of gold bars on Piccolo’s submarine, when just a few scenes earlier we saw Joe take the crates to the God Phoenix.

This episode has a couple good moments, but nothing really important happens.