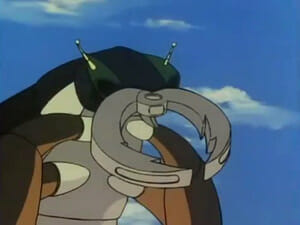 In Africa, an artificial lake created by the International Science Organization disappears. Three scientists go out to investigate and find a giant antlion mech, which kills them with laser beams.

Doctor Nambu orders the Science Ninja Team to Africa to find out what’s going on with the missing lake. The team investigates separately in their vehicles, but they find nothing and spend the night in an old village. 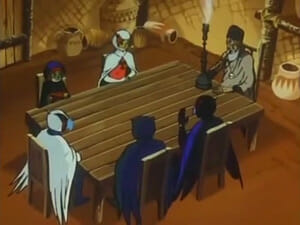 The team chats with Gramps

While having dinner with the Science Ninja Team, the village elder (“Gramps”) tells the tale of the red sand. Many years ago, the site of the old village was home to a powerful civilization. Its source of power? Red sand. This sand could burn forever and was used to make iron and copper. One day it started to move, then multiplied and set the entire city on fire for three hundred days before disappearing into the desert.

That night, two Galactor guards kidnap Gramps as he prays. Jinpei witnesses the kidnapping and chases after them in his buggy. The guards slip away into the antlion mech with their hostage…but not before the old man tosses away his skull necklace.

The next morning, Ken examines the necklace, crushing it with his fist to find red sand inside! This sample is sent to Dr. Nambu for analysis. 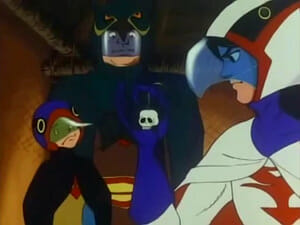 At the Crescent Coral Base, Nambu gives a presentation to members of the ISO on red sand. Turns out it’s actually a new type of bacterium previously undetected on Earth that harbors a new, incredibly powerful element. When the bacteria comes into contact with water, it multiplies; it’s also very, very flammable.

At the Galactor base, this episode’s commander – a floppy eared guy with a Caribbean accent (in the English dub) tortures Gramps hoping to find the location of the red sand, but the old man ain’t talking. 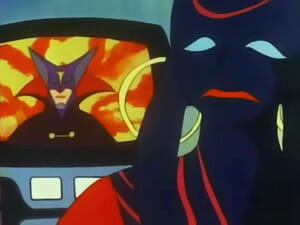 The Science Ninja Team finds the antlion in the process of moving underground water while its controllers search for the red sand. Ken contacts Nambu and says they’re going to sneak into Galactor’s base (which Jun and Joe found earlier) and rescue the old man.

The Galactor commander steps up his interrogation of Gramps by threatening to kill everyone in the village. “I’m quite cunning, if I do say so myself.”

This is enough for Gramps to spill the beans: the red sand is buried under tunnels that are only revealed when the Mountain of God casts its shadow on the night of a full moon.

There’s an explosion – the Science Ninja Team has arrived. The base commander and his men escape in the antlion, leaving Gramps to die in Ken’s arms. With his last ounce of strength, Gramps tells Gatchaman what he told the Galactor commander about where to find the sand.

The antlion mech secures the red sand and mixes it with water, causing the sand to multiply. The God Phoenix fires a couple Bird Missiles at the antlion, but it’s undamaged. “Good grief! That’s one tough bug,” says Ken.

As a last resort, Ken orders the Firebird technique; the God Phoenix turns into a flaming firebird and ignites all the red sand around the antlion, causing a colossal explosion. The battle now over, the God Phoenix reverts to its normal form and flies away. 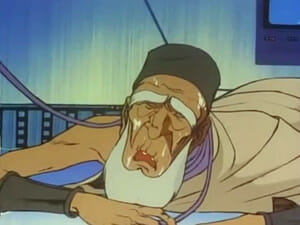 This episode was pretty average. There’s nothing really wrong with it but nothing really good or memorable about it, either. The English dub helps this episode by giving amusing accents to the Galactor commander and ISO members; those voices would be my only reason to rewatch this episode.