Robot ants cause chaos at the city power plant. The Science Ninja Team must quell their invasion with the power of the sun. 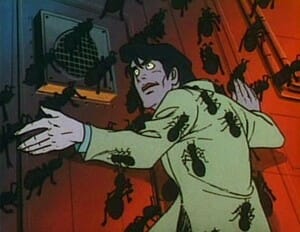 The God Phoenix arrives at the power plant and Joe fires a Bird Missile at a nearby dam, causing a flood that washes all the ants away.

The next morning, the Science Ninja Team investigates the ruins of the damaged power plant. Jun screeches when she finds a dead ant, but it’s not a normal ant – it’s a robot!

Nambu analyzes the ant in the lab and holds Galactor responsible for its creation. No doubt a Galactor base is nearby controlling these ants; Nambu repairs the damaged ant and the team follows it to discover the location of this base. 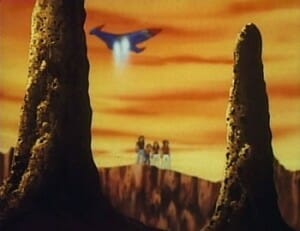 The team finds Galactor’s base

Ken and the others, sans Ryu, who’s stuck in the Phoenix again, fall into a sand whirlpool and find themselves in the base, surrounded by Galactor guards and the base commander, who is dressed as an ant wearing a ruff. This is surely the most uniquely-dressed Galactor commander seen to date, and that’s saying something!

A glass dome covers the Science Ninja Team, trapping them. Ken tries to break the dome with his boomerang but fails. Jinpei offers a different solution: setting off an explosive with his bolas. Sure enough, it breaks the glass and the team is free to scour the base, beating up Galactor guards wherever they go.

Meanwhile, an army of ants attempts to invade the city, but Red Impulse arrives and fires missiles at them. Yes, he fires missiles at ants. “Stake your very honor on not allowing a single robot ant into the city,” he says to his men.

The Galactor commander isn’t too happy about this and retaliates with a giant robot ant. Though, since the ants we’ve already seen technically ARE giant ant robots (they’re rodent-sized), this would be more of a gianter ant robot. Ryu picks up the rest of the team, and Nambu reports that he has discovered that the robot ants’ weakness is heat. 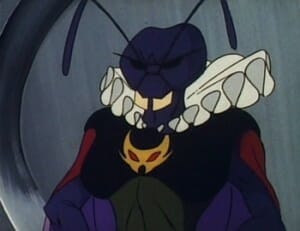 The award for Best Dressed Galactor Commander goes to…

Heat From the Sun

Nambu says that the God Phoenix is no match for the gianter robot ant and that the team must stand down until the daytime. “If we’re that patient, there may be more casualties,” says Ken. “This is the only choice we have,” Nambu replies. Sure enough, the ant does create casualties all around the city by smashing, bashing, and spraying things with acid.

As the sun comes up, the God Phoenix returns and uses a dish at its bow to reflect sunlight at the ant, damaging it. However, clouds cover up the sun, and the ant is able to go back on the offensive: wings pop out and it chases the Phoenix, which is unable to move as fast due to the weight of the dish.

Suddenly, the three Red Impulse planes arrive to give support. The sun comes out, and the God Phoenix is able to use the dish on the ant again, this time destroying it. 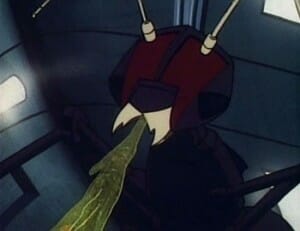 I, for one, welcome our new insect overlords

This episode was a lot more interesting than usual: the solution to dealing with the ant problem was creative, as was Galactor’s decision to use robot ants in the first place…even if it is a bit ridiculous.

The fact that the Science Ninja Team was forced to withdraw for the night and leave the gianter ant robot unopposed was a surprise. As in the previous episode, many innocents died and there was nothing the team could do. They’re not the all powerful hero types we’re accustomed to seeing in media; they must deal with collateral damage somewhat realistically.

The end of the episode where Jun recognizes the sun as a member of the team was pretty cheesy, though.