Domon gets in the middle of a feud between Neo Canada’s Andrew Graham and Neo Russia’s Argo Gulskii. 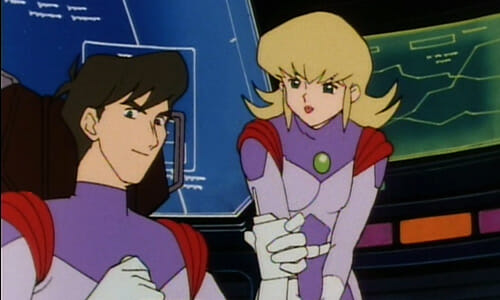 Andrew and his wife Norma five years ago

Five years ago, back when he was a space pirate, Argo accidentally crashed his ship into a Saturn security station run by a married couple. Wife Norma died and husband Andrew became a lumberjack, joining the Gundam Fight as Neo Canada’s fighter so he can ultimately get revenge on Argo. 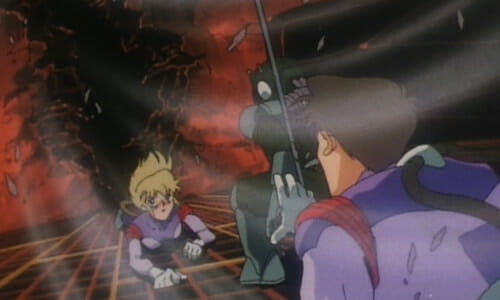 Norma shortly before her death

In Neo Canada, Andrew meets up with Domon and offers a proposition: If Domon agrees to hand over data from his fight with Bolt Gundam, Andrew will willingly surrender his Gundam’s head. 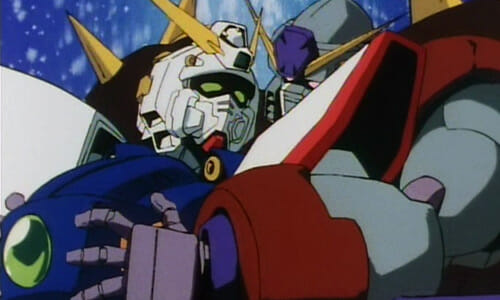 Domon thinks this proposal is dumb and calls his Shining Gundam. Andrew gets in his Lumber Gundam, and they fight a bit, until Andrew decides to grab Rain and fly off. 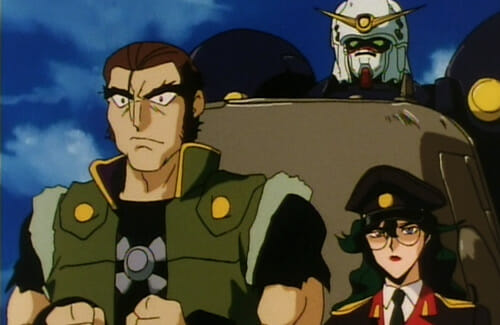 The next day, Neo Russia’s plane lands in Neo Canada. Domon makes an explosive entrance and tells Nastasha and Argo about Andrew’s vendetta. 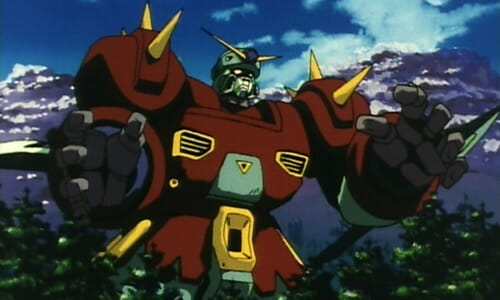 Andrew goes out to fight Argo but Shining Gundam intercepts him, and Domon tries to rip open Lumber Gundam’s cockpit to rescue Rain. The stress of the attack causes the cliff underneath to give way, but Argo in the Bolt Gundam lifts Lumber Gundam to safety. 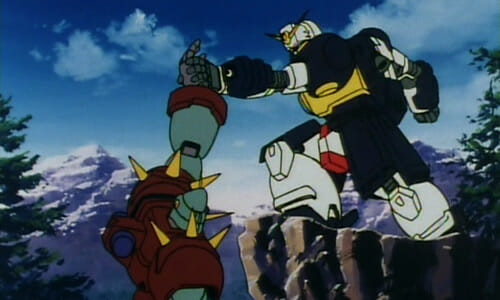 After the fight, Nastasha tells Andrew that according to a report, Argo tried to save Norma. Andrew doesn’t believe it, and Argo still feels guilty about her death: “If you want revenge, come get me.” 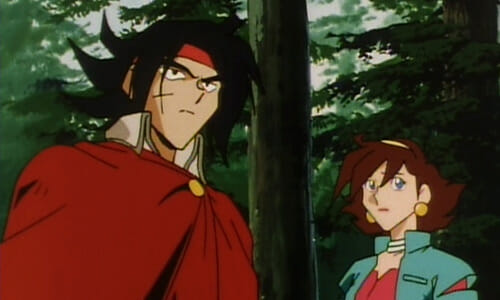 Domon and Rain at the end of the episode

Another episode featuring a Gundam Fighter with a tragic backstory…and that’s perfectly fine. Andrew is a welcome addition to the show; a formidable antagonist who’s also sympathetic. The episode’s locale was nice and refreshing – I loved seeing Niagara Falls and, hey – Saturn! We never see Saturn in Gundam. 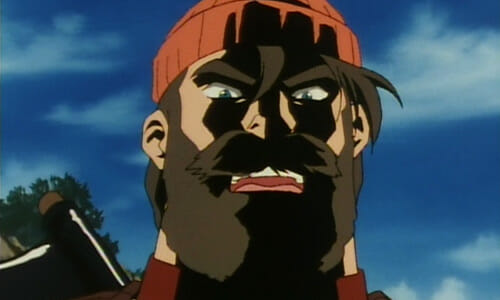 What I liked most about this episode was its use of Argo. Unlike Chibodee in the last episode, Argo was a crucial part of the plot and we learned more about him and his past. But did anyone seriously think Argo was going to let Lumber Gundam fall off the cliff at the end? Domon seemed to think so, becoming teary-eyed over concern for Rain. But come on, Argo has a heart of gold! He’ll save them, duh. 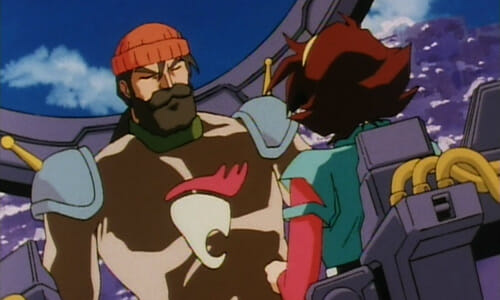 A lot of references to death were stripped from G Gundam‘s English dub in preparation for its tv airing in the US; because the series didn’t have an uncut dub, like Gundam Wing, this censorship remains on all home video releases. It made for some pretty awkward conversations in this episode, since Norma’s death was an important part of the story. Of all the euphemisms they used, “erase” was my favorite.