Goku asks Shenron how to become a Super Saiyan God then follows his instructions. Goten and Trunks bring out the Dragon Balls (or “Wish Orbs” as Beerus calls them) from Bulma’s prize room that we saw sometime back. Shenron freaks out when he sees Beerus Goku, Gohan, Goten, and Trunks are definitely pure-hearted. Does Vegeta count? Roshi says he does. That leaves one more. Videl tells everyone she’s pregnant. Okay, that counts; let’s do this ritual. The pure-hearted Saiyans give Goku their power

Everyone joins hands and gives Goku their energy. He is now a Super Saiyan God. Super continues its glacial pace, but it’s fine because all the characters are fun and likeable. This pace will remain for the rest of the story arc, so strap yourselves in because Goku’s fight against Beerus is going to last 5 episodes. The Pilaf gang is still around

I like how the Super Saiyan God transformation makes Goku skinny instead of buff. It’s a nice reversal of our expectations, and a common occurrence in Dragon Ball: the stronger person isn’t necessarily the larger person (Nappa compared to Vegeta, Frieza’s final form, Kid Buu, etc.). Beerus and Whis observe the transformation

The transformation itself was fairly impressive, as was the music that played during the scene; I think it’s Dragon Ball Super‘s best track. It has a chorus so it sounds really holy and shit. 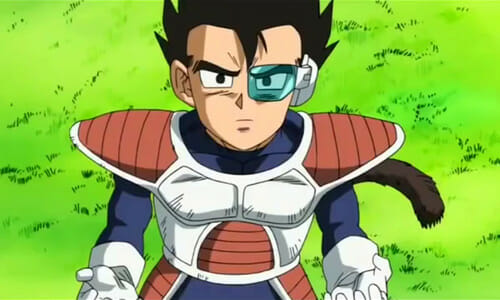 Unlike Battle of Gods, when everyone’s looking for the six pure-hearted Saiyans, no one mentions Vegeta’s brother Tarble. He only ever showed up once in the 2008 DBZ special, so it’s no big loss if he’s no longer canon.