The Doctor reunites with Ashildr, now calling herself Me, and gets involved in a plot involving an amulet and a lion guy. 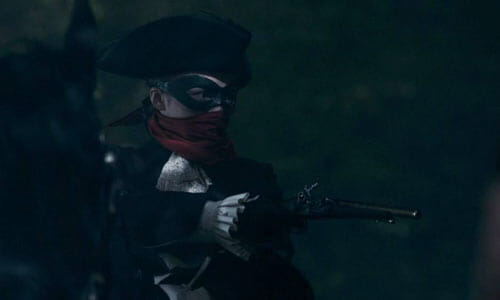 Clara’s off in taekwondo class, leaving the Doctor on his own. He appears in 1651 London searching for alien energy, but ends up interfering in the robbery of a carriage by a Zorro-esque character, the Knightmare. The carriage escapes and the Knightmare reveals himself, or rather, herself to the Doctor as Ashildr (from the previous episode), who now goes by “Me.” 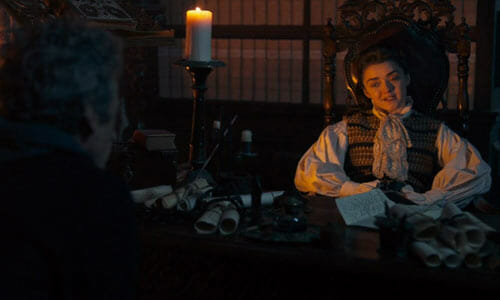 The Doctor and Me (Ashildr)

Me chats with the Doctor in her abode about how bitter she is and the loneliness of being immortal. She still has the second Mire chip in her possession to make someone else immortal. “No one’s good enough,” she says.

Me wanted to rob the people in the carriage, the Fanshawes, of “an ancient amulet from foreign parts,” and the Doctor believes that this amulet is the source of the strange energy he’s been detecting. Together, they break into the Fanshawe house and steal the emerald. 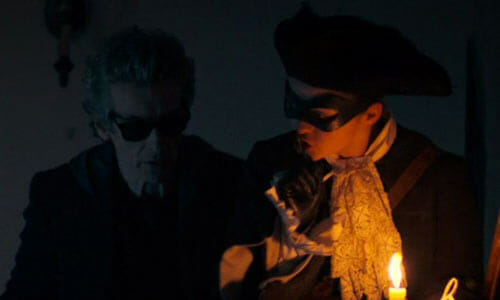 Back at Me’s place, we learn that Me’s been in league with a lion alien wearing a crown, Leandro (de Caprio), who crash-landed on Earth and is trying to get home. The emerald belongs to him, and with it, he can open an interdimensional rift back to his home – the only catch is that someone has to die to make it work; it runs on life energy or somesuch. 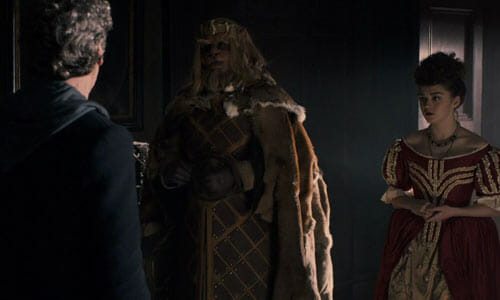 Me’s sick and tired of living on Earth and since the Doctor won’t take her in, she’s going to catch a ride with Leandro. A couple officer guys come in to report that Sam Swift, a thief, has been arrested and is to be hanged for his crimes. His death will be the perfect opportunity to activate the amulet. 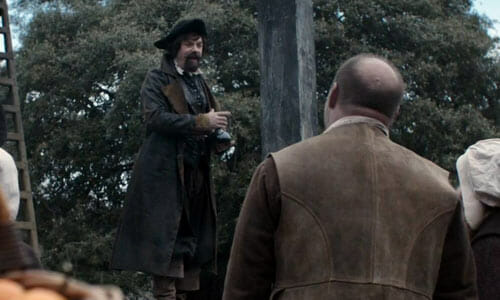 Sam entertains a crowd before his hanging

Sam dies and the amulet shoots a beam into the sky, opening a portal to Leandro’s planet, but the whole scheme was a trap concocted by the lion people to attack Earth and they start shooting lasers. Me sees the people dying all around her and gets all “what have I done?” She shoves the Mire chip in her possession into Sam’s brain, bringing him back to life, which closes the portal and causes Leandro to die because…reasons. 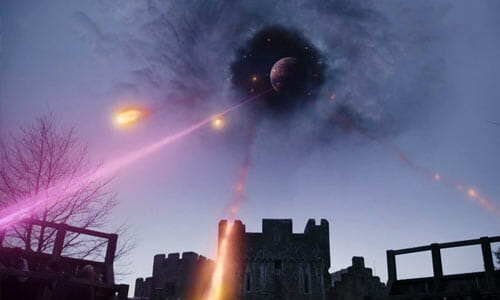 Later in a pub, the Doctor tells Me that Sam may or may not be immortal because the amulet probably drained some of the chip’s power. Good to know.

The Doctor leaves to pick up Clara in the present. She shows the Doctor a selfie she took with one of her students, and sure enough, Me is in the background. 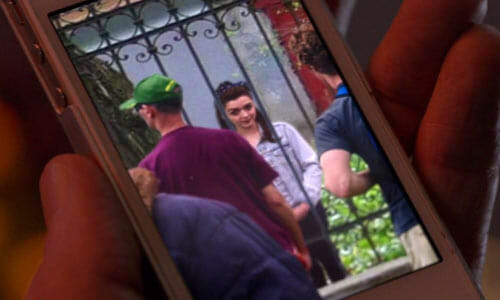 Me in the background of Clara’s selfie

This episode picks up on the immortal Ashildr storyline introduced in The Girl Who Died. I feel this episode shouldn’t have aired directly after that one; it should have been spaced out more, making Ashildr’s return more of a surprise. 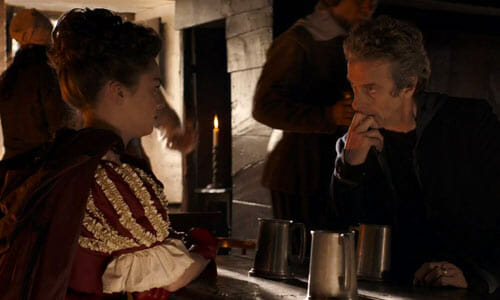 Is Me companion material?

There were a couple good scenes of the Doctor and Me discussing the disadvantages of being immortal. We never got a decent explanation on why the Doctor couldn’t take her on as a companion (other than the fact that the actress has a commitment to Game of Thrones). They would have been perfect for each other!

Me still hasn’t won me over yet, though. While she gets more depth and development this episode, I still feel the show is trying too hard to spotlight her and it all feels too forced.

And I felt that while Sam Swift added an element of comic relief and much-needed energy, he was a bit too much at times, and veered the episode into overly silly territory much like Robot of Sherwood. 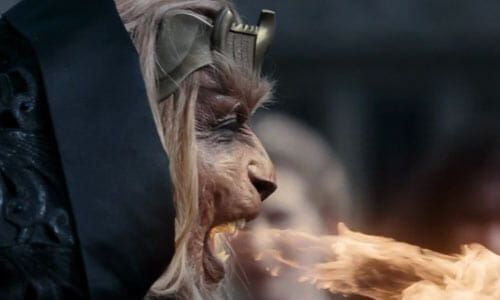 The biggest flaw of the episode lies in the lion guy. He was a generic villain only there to fulfill the episode’s monster quota. I was actually hoping he was honest about his intentions and wouldn’t turn out to be a duplicitous villain – now that would be a twist. Why did his people want to attack Earth so badly? Why was he wearing a crown? Why did he BREATHE FIRE? How did he even die? Did his people just press a button on a remote to vaporize him? I don’t know any of this. He was just a lion guy, okay?

His makeup was very impressive though. He reminded me a lot of Prince Thrakkath from Wing Commander. Where is my live action Wing Commander show, dammit?!

There are a few good scenes in this episode, and it’s definitely better than the previous episode, but it has some flaws that weigh it down to where I wouldn’t want to watch it again.