Lt. Sleggar Law was a late addition to the cast of Mobile Suit Gundam, showing up at the very end of the Jaburo arc as a pilot to replace a character who was killed off earlier. He’s like a stereotypical jock – brash, arrogant, and overconfident, but he’s entertaining as hell and I am 99% sure he is supposed to be a caricature of Americans. When he speaks, his lips are animated as if he’s speaking out of the side of his mouth, and I think his English voice actor did an impeccable job of portraying Sleggar, making him talk slow and sound kinda dumb (but in a subtle, endearing way).

A Decoy in Space Sleggar joins the crew of White Base and immediately starts acting like he owns the place and hits on all the female members of the crew. During the battle with Char’s Zanzibar, Sleggar mans White Base’s main gun and manages to get a few hits: “That’ll teach you to mess with my ship.” Sleggar starts piloting the G-Fighter and during the battle with Dren’s Musai group, starts firing at the Zeon ships before they’re well within range, inviting criticism from his fellow pilots. When Mirai has an argument with her ex-fiance Cameron Bloom on the Side 6 colony, Sleggar shows up to punch him in the face and call him “pencil neck.” An act of barbarism? Cameron thinks so, but to be fair, Sleggar DID remove Cameron’s glasses before punching him. Mirai and Cameron have another argument, this time on the White Base bridge. Sleggar slaps Mirai telling her she should accept Cameron’s help, shocking everyone around them.

The Glory of Solomon

Sleggar doesn’t do too much in this one; here he is making a snide remark or two. Later in the episode, he joins the rest of the White Base pilots as the Battle of Solomon begins. Sleggar’s G-Fighter returns to White Base for repairs as the Battle of Solomon continues. Here’s where things get weird: while he’s taking a break to eat a burger, Mirai runs to the dock to profess her love for him! That certainly came out of nowhere. Sleggar gives Mirai his mother’s ring to hold on to until he gets back, and he takes off in the G-Fighter. Uh oh, I don’t like the look of this. A bit later in the episode, Sleggar’s G-Fighter is struck by the Big Zam mobile armor and he falls into the endless void of space. Back on White Base, Amuro tells Mirai that Sleggar is dead and she cries in the elevator; Lt. Sleggar is never mentioned again.

The Mobile Suit Gundam episodes were recut into a film trilogy with some additional animation.

Sleggar briefly shows up at the end and joins the White Base crew (footage from A Decoy in Space). This film contains the rest of his appearances as seen in the series. The main difference is that he pilots a Core Booster jet instead of the clunky-looking G-Fighter, and his death is better animated and less ambiguous. In the original, it looked like he could have survived, but here he gets caught in the Core Booster’s explosion and it’s crystal clear he’s dead. Sleggar shows up in a couple video games, but always as a support character. 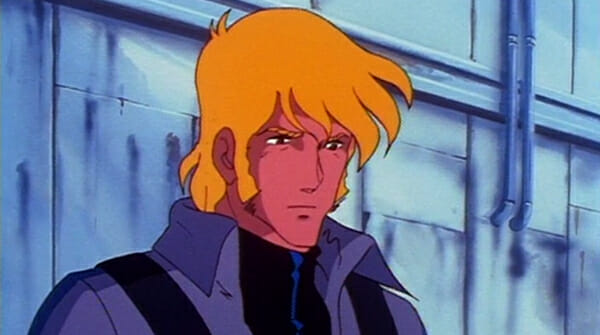 The director of Macross was a huge Sleggar fan and used him as inspiration when designing Roy, who seems like a slightly older, more experienced Sleggar. While Roy’s also a carefree jokester, he lacks Sleggar’s oafishness and is someone the other characters look up to as a mentor. He’s what the ultimate evolution of Sleggar would look like, and maybe what Sleggar would have become had he survived. 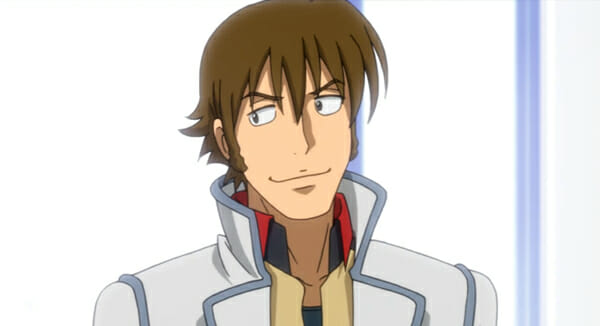 I haven’t seen this show yet, but this guy looks and (from what I hear) acts like Sleggar to the point where someone actually says, “Hey, you look and act like Sleggar.”