Harper unknowingly brings a hungry slug on board Andromeda, and incidentally finds a ghost. 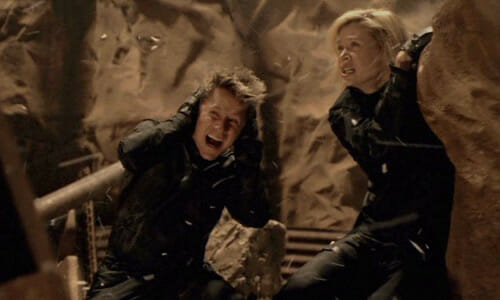 Harper and Beka are stuck in a sandstorm

The episode begins with Beka, and Harper on a stormy planet taking cover in a cave, where a slug gets into the latter’s boot. Braving the storm, Hunt arrives in the Eureka Maru and picks them both up. 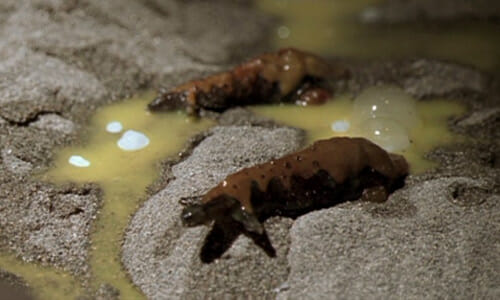 A pair of slugs

The slug starts eating everything on Andromeda and reproducing; the crew splits up, searching the ship for the slugs and laying traps. Harper finds what appears to be a ghost, but no one believes him. They’ll soon find out just how wrong they are. 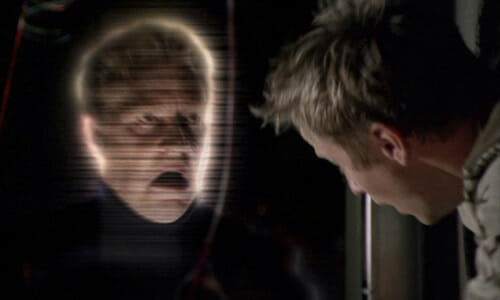 There’s something strange in the neighborhood

Hunt and Beka find a dead body in a secret part of the ship. It seems the body, Eddie, was an original Andromeda crewmember who transferred right before the ship got stuck in the black hole during the first episode. Eddie got trapped under a falling girder and wasn’t able to evacuate with the rest of the crew, so he made the 300 year-long passage with Hunt and Rommie, but quickly died due to his injuries. Now he’s a ghost because the machine he happened to die on happened to scan his brain. 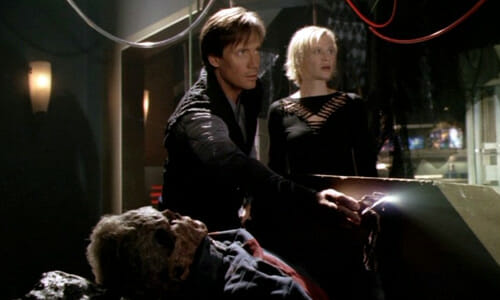 Ghost Eddie hates Hunt for abandoning him and shows up on Andromeda’s bridge to kick some ass. Hunt injures Ghost Eddie, revealing that he is in fact Android Eddie. 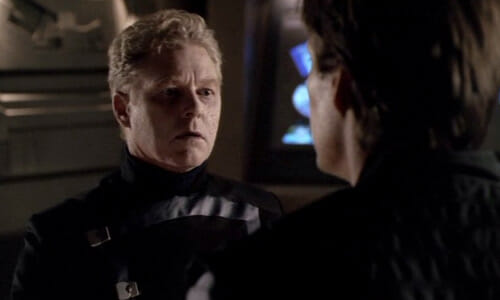 A slug appears on Android Eddie’s shoulder and he electrocutes it to death. Hunt asks Eddie to electrocute all the slugs on the ship: “Why should I?” asks Eddie. “I’ll be your friend” says Hunt. (Not really but pretty much). Anyway, this talk of friendship makes Eddie give up the whole revenge thing, and he fulfills Hunt’s request, but ends up dying again. 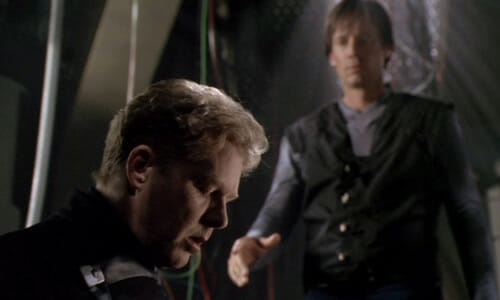 This felt like two episodes in one. You’ve got the slug story on one hand, which, by itself could have been an okay “man vs. nature” story like the whale episode (albeit a tedious one). On the other hand, you’ve got the ghost story, which just wasn’t great. Should I go as far as to say it was dumb? Sure. And the ending, where the slug story and the ghost story met and solved each other was way too neat and tidy. 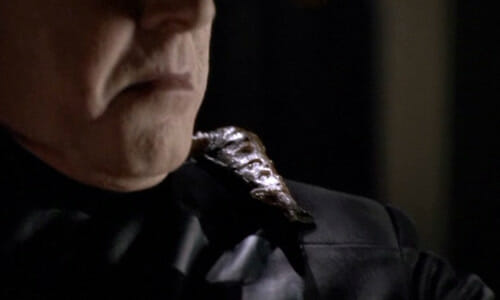 The problem becomes the solution

But Eddie is definitely the weakest link on a chain of weak links; he was a bit too goofy to take seriously. His obsession with being friends with Hunt was laughable. At the same time, it was also a bit creepy and depressing; however, neither attribute gets thoroughly examined in the episode. 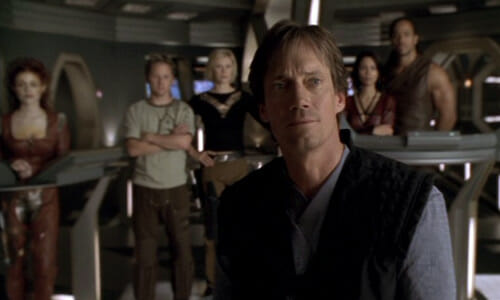 By the way, this episode is the first to mention new crew members aboard Andromeda due to the Commonwealth’s revival. We’ll see them soon enough, but don’t get too excited. They’re all just extras, replacing Andromeda’s silver helper androids to do stuff in the background. Apart from one or two exceptions, we’re not going to get to know any of them and they won’t even speak! So…what’s the point of having them?