Andromeda launches a preemptive strike against the hostile planet Marduk before it can build weapons of mass destruction. 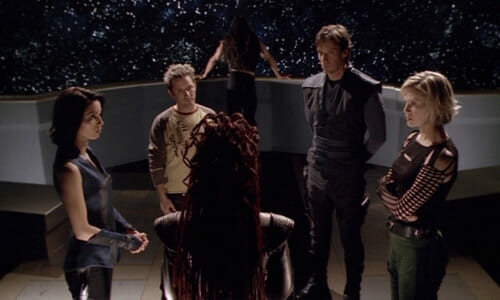 What’s this bullshit about?

Our episode begins with the Andromeda crew assembled on the observation deck watching Trance do some sort of funeral ceremony for someone we’ve never heard of or seen before. This dead person will never be mentioned again. 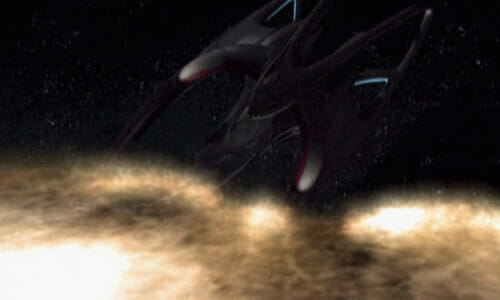 Andromeda’s hit by a shockwave

Andromeda gets hit by a shockwave from a nearby sun that was destroyed. After some scans, Rommie detects the element Voltarium and deduces that a nova bomb caused the sun’s destruction; the crew points fingers at the planet Marduk, a former Commonwealth member now ruled by a militant dictator. 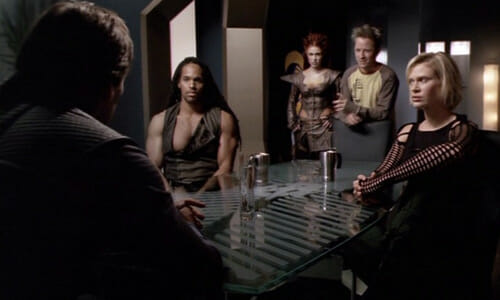 If Marduk’s government makes more nova bombs with their Voltarium reactor, they could threaten neighboring worlds. Captain Hunt wants to stop them, but the planet has an incredibly formidable defense grid. He opts to take three slipfighters – containing himself (with Trance), Tyr, and Beka – which are small enough and fast enough to pass through the grid. 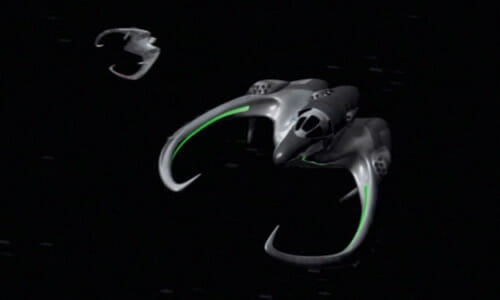 Here are the slipfighters the episode title promised

Both Tyr and Hunt’s slipfighters are damaged and crash on the planet, where they’re forced to fight and kill a few Marduk soldiers. Trance spots the Voltarium reactor and Beka destroys it with her fighter, then picks up her stranded crewmates and returns to Andromeda. 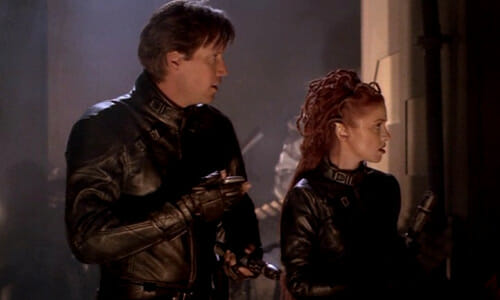 Hunt and Trance on Marduk 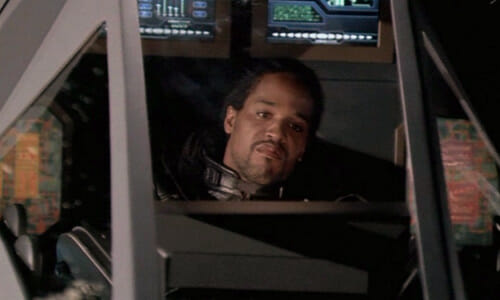 Tyr acts very weird in this episode; he freaks out about the Marduk mission and screws up in the slipfighter simulator. This isn’t the brave Nietzschean we’ve come to know. He was more like a crybaby. What was the purpose of this behavior? To pad out some scenes with forced conflict? 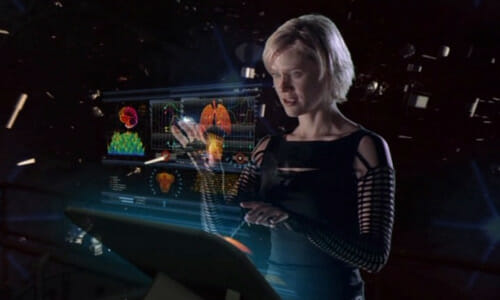 Beka keeps an eye on Tyr’s vitals in the simulator

The opening funeral scene is also incredibly strange. We have no idea who Trance is mourning, and just as Hunt was about to ask her how he died, the ship gets hit by the shockwave setting the course of the rest of the episode. Will we ever find out? Nope!