Beka’s Uncle Sid returns and he’s up to his usual tricks. 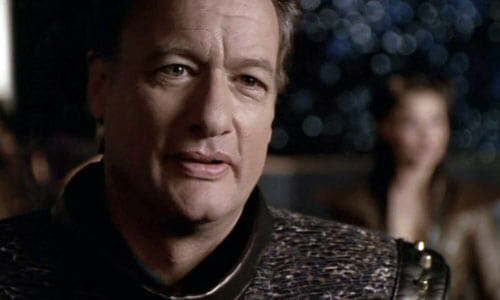 Andromeda picks up Beka’s Uncle Sid after his ship is attacked by pirates; with the New Commonwealth established, Sid has now become a politician. 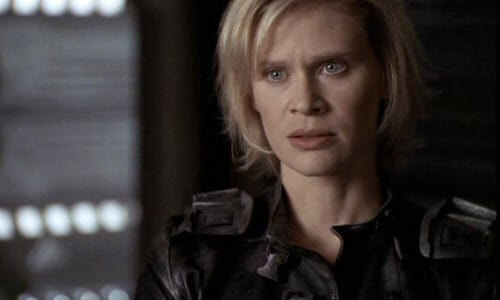 Beka’s not happy to see him

Beka is disgusted with Sid after what she went through in their last encounter, and threatens to leak the incriminating video he was so keen on acquiring. He laughs off her threat, saying it’s already been released to the public and carefully spun by his PR people. 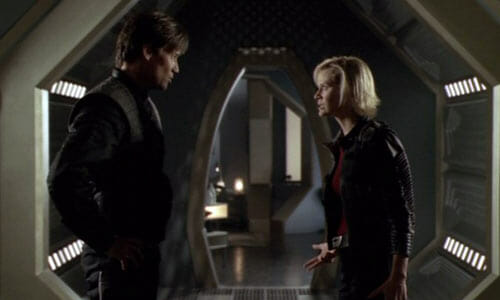 Hunt tells Beka to be nice

Captain Hunt takes Beka aside and tells her that her unprofessional behavior towards Sid is unacceptable and that she should apologize to him. When she visits Sid’s office, she finds that he’s been shot in the head. 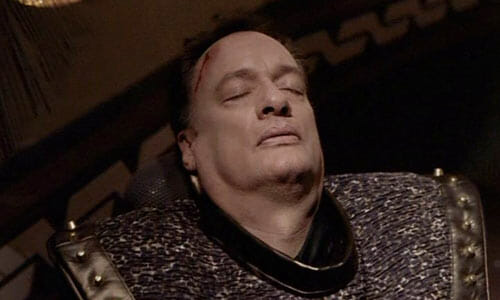 We learn that Sid set up a “revenge” fund – a 15 million guilder bounty “to exterminate his rivals from beyond the grave.” Although it’s still not clear which of these rivals are responsible for shooting Sid, bounty hunters start popping up and killing all of them. 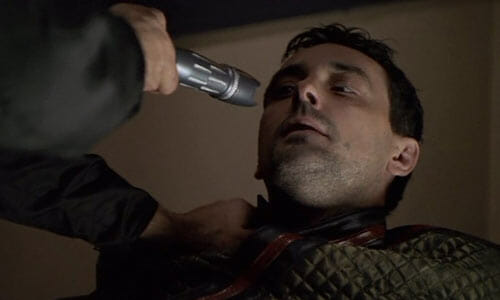 One of Sid’s business rivals

Sid’s not actually dead – he’s in critical condition. While Trance tends to his body, Rommie and Harper jack into the dataport in Sid’s neck to upload his mind into Andromeda’s computer. In the Virtual Reality Matrix, Beka and Hunt take turns chatting with Sid to see if they can uncover his shooter’s identity. 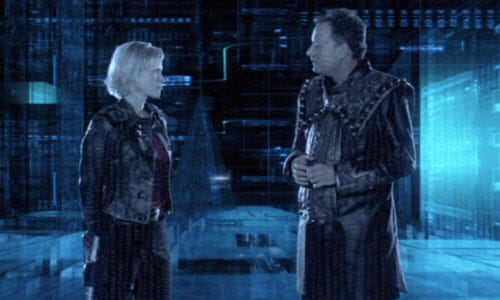 Beka talks to Sid in the VR Matrix

All Part of the Plan

Sid finally confesses that he shot himself so the bounty hunters would go after his rivals; he survives his injury, but because Hunt recorded his confession, his political career is over. Sid’s not disappointed, though: “…my enemies are dead, and I’m not enslaved to a political office. I am in a better position than when we started.” 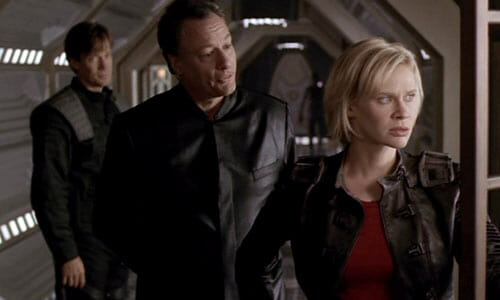 Sid ends up getting what he wants

This episode was a breath of air, considering it’s the first one we’ve had in awhile that had an easy-to-follow plot and wasn’t plain awful. While the story itself was fairly predictable and unoriginal, it at least tried to be a little clever – high praise indeed. As in his last appearance, John deLancie elevated the quality of the episode and made it pretty fun. Unfortunately, like many of Andromeda‘s promising characters and storylines, Sid will never be seen again.