Andromeda gets swallowed up by a space whale, and Captain Hunt and Trance (in the Maru) work to get it out. 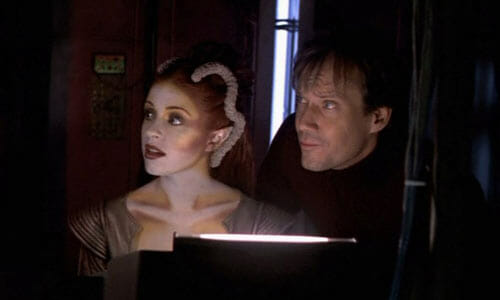 Trance and Hunt in the Eureka Maru

Captain Hunt and Trance leave in the Eureka Maru to answer the planet Savion’s distress call – they were attacked by the Cetus, a giant mythological space whale. Hunt thinks it’s just superstitious nonsense because Savion’s a primitive world, but scans of the planet show it was indeed attacked by a giant something. 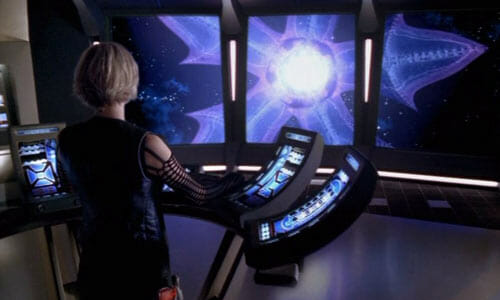 Andromeda and the Cetus

On Andromeda, the rest of the crew put up with Harper’s music and dancing until an unidentified object shows up on their sensors. The Cetus; it swallows Andromeda whole. 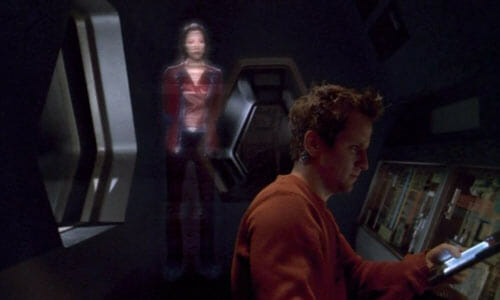 Harper works on a solution

The Eureka Maru shows up to rescue Andromeda, and we move back and forth between the pair on the Maru and the others on Andromeda as they try different ways to get out of this jam. Harper ends up with the winning idea: he jettisons Andromeda’s engine core, which destroys the Cetus and finally frees Andromeda. 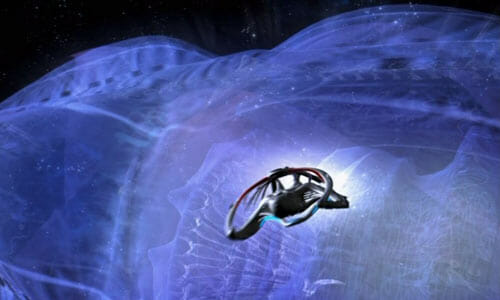 Not the worst episode, but still not great. There were some good character interactions and moments, notably between Beka and Tyr as they talk about Dylan and what to do should he die. And the idea of the ship getting eaten by a creature seemed pretty fun, but I feel this episode didn’t offer much that would make me want to revisit it. Lots of technobabble and characters throwing out different plans hoping one of them will work. 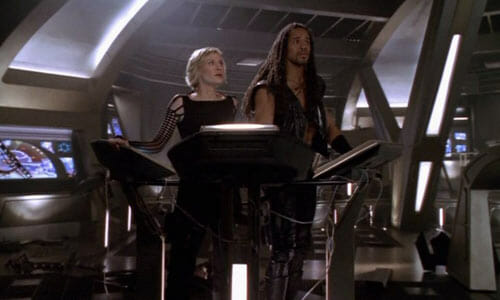 Beka and Tyr had a good scene in this episode

I’d also like to make note of something I’ve noticed in Kevin Sorbo’s portrayal of Dylan Hunt. There are a lot of times where he gives a slight chuckle when he delivers a line. Early in the series, I didn’t mind it. I felt it made him seem a little “real” and easygoing. But now it seems like Sorbo’s overusing it and I am really getting sick of it. Tone it down, man!