Members of the Andromeda crew raid a temple constructed by a culture obsessed with the number three. 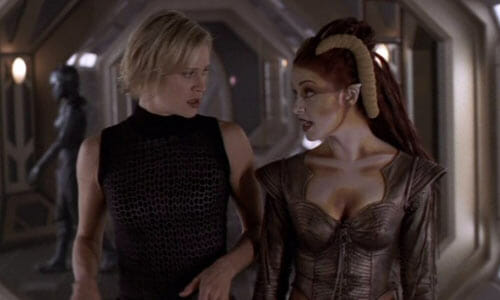 Beka gets excited to lead a treasure hunting expedition to get something called the Engine of Creation, an ancient, legendary device said to give its users godlike abilities. She tries to recruit Tyr to go with her, but Trance pulls the “I’m from the future” card and warns that if Tyr goes on the expedition, he’ll die…so Beka takes Trance instead. They need a third person to go with them, so they choose Captain Hunt because Harper and Rommie aren’t in this episode. 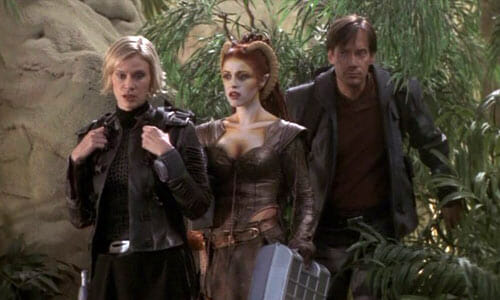 The trio heads down to the planet

The trio leaves Andromeda in the Eureka Maru and heads to the planet Sharknado (Shintaido). There they run into another trio – a rival group of Engine hunters – comprised of Some Guy, Duran Duran, and Gullible Alien. 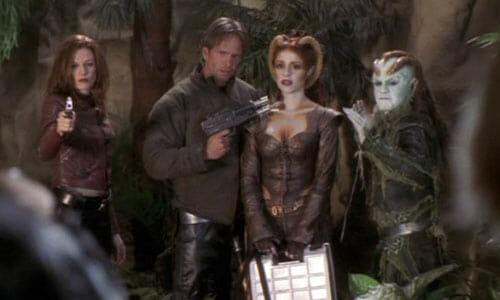 Seekers of the Treasure

After Beka’s group enters a temple and deals with its boobytraps, both parties are captured by the native inhabitants of Sharknado. The leader calls forth both trios and tells them they need to fight each other to find who is worthy of getting the Engine. 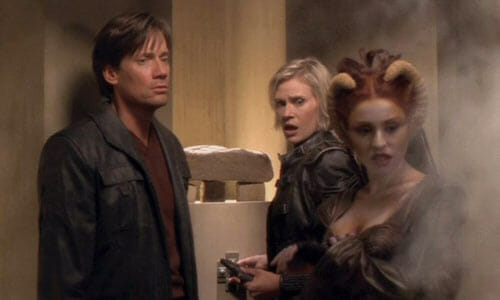 The group triggers a boobytrap and Hunt doesn’t care

Hunt fights Some Guy and wins. Beka fights Duran Duran and wins. Trance doesn’t fight Gullible Alien, and instead chats with him; they’re apparently from the same homeworld. He invites her to return home but she says no thanks. 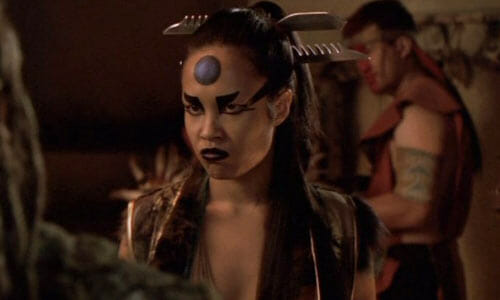 Beka, Hunt, and Trance are presented with the Engine (which needs three people to carry it), and they take it back to the Maru. However, it turns out it’s not really the Engine of Creation, but a piece of it – one of five. 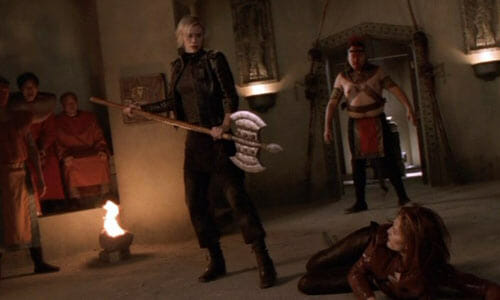 This episode was a lot like Indiana Jones with its puzzles and temple robbing, more so than last season’s Fear and Loathing in the Milky Way. It was still crappy, though. The rival treasure hunters were boring and simplistic (apart from Gullible Alien…barely), and the Sharknado people were just silly. Embarrassingly silly, to be exact. 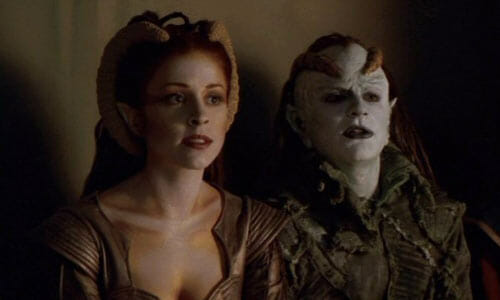 I feel like Trance meeting another of her species should have been a much bigger deal than it really is, but nothing major comes of it. 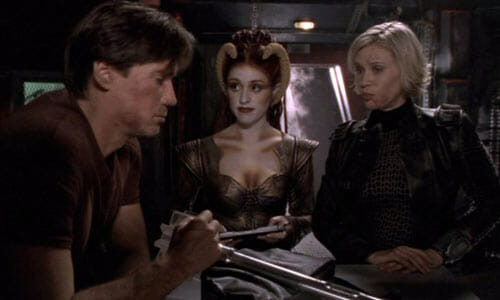 A part from the Engine of Creation

The Engine of Creation was teased in a brief mention last season; now that the crew has one of the pieces, they will presumably look for the other four in future episodes…

Think again! This storyline becomes one of the arcs dropped due to showrunner Robert Hewitt Wolfe‘s departure. The crew is simply left with that one piece of the puzzle sitting somewhere in the Eureka Maru’s cargo hold collecting dust for the rest of the series.