Rommie visits an anti-AI planet to stop the launch of a ship armed with a powerful Magog weapon. 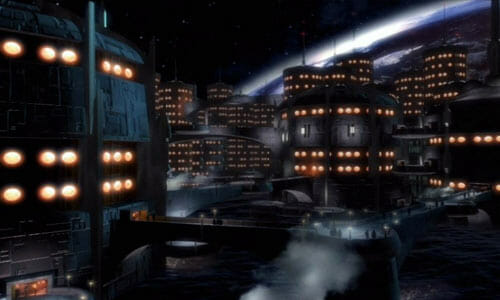 The people of Machen Alpha have used technology provided by the Magog to create a ship (the Basilisk) armed with a planet-destroying weapon. So far it’s only destroyed one planet but it’s already set its sights on its next victim, a member of the New Systems Commonwealth. 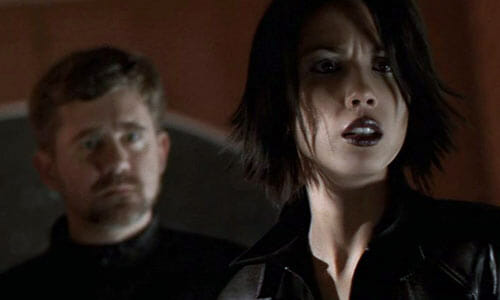 Rommie heads down to Machen Alpha with Harper, Tyr, and Rev Bem in an attempt to destroy the Basilisk; she secretly meets with one of its engineers, a defector named Kim, but must get him to safety when the planet’s authorities close in. 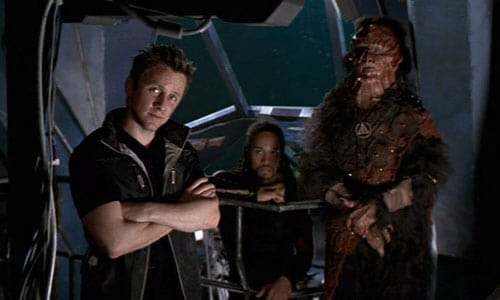 Elsewhere on the planet, the Eureka Maru gets damaged from an attack and sinks underwater. Harper tries to repair the ship, but overdoses on his anti-Magog larvae medication and collapses. 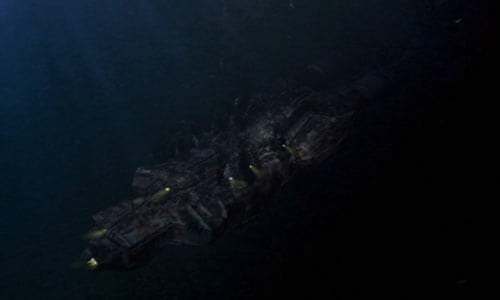 Further elsewhere, the Basilisk launches and Andromeda intercepts. Both ships trade fire, but the Basilisk is ultimately destroyed. The Basilisk fires on Andromeda 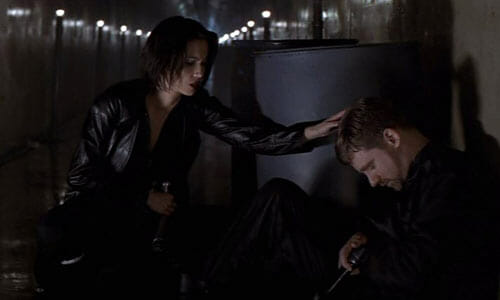 At the factory, Rommie faces the commander of Machen Alpha security, who surprisingly happens to be an android himself. They get in a wire fu fight but Rommie ends up winning, destroys the factory, and escapes in a Magog ship that was under study. 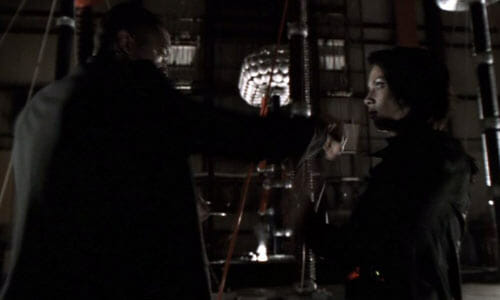 Rommie uses her new ship to rescue the Eureka Maru, and both ships return to Andromeda. 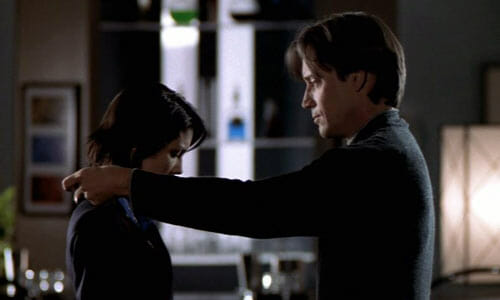 At least Rommie gets a medal out of it

This episode certainly had panache; Machen Alpha gave off some major cyberpunk vibes. Then, with the trenchcoat Rommie wore in this episode, and the wire fu fight at the end, all I could conclude was that this episode was seriously inspired by The Matrix…which isn’t necessarily a bad thing. At least the episode didn’t ape the “bullet time” thing that almost every single thing ever referenced for the next seven years after The Matrix came out. 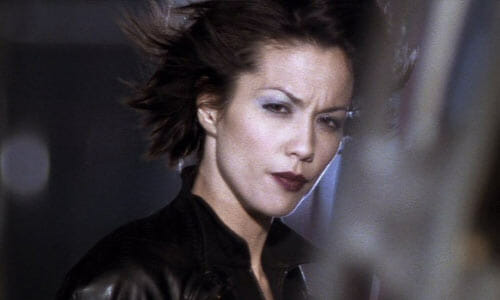 Speaking of actors, a few episodes ago we saw the actor who would later go on to play Three in the Dark Matter series. This episode has another future Dark Matter actor showing up – Roger Cross AKA the Machen security commander AKA Six. It’s like six degrees of separation or something. 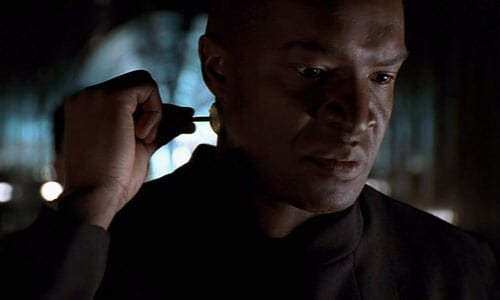 The Maru being in jeopardy this episode feels a bit of a retread of Exit Strategies, but at least we got some good character moments and dialogue between Rev Bem and Tyr. Probably one of the more noteworthy and redeeming elements of the entire episode.

Now the crew of Andromeda have a Magog ship in their possession, but as in the last episode with Isabella Ortiz, this ship isn’t mentioned ever again. Another lost opportunity.