The Eureka Maru gets attacked by Nietzscheans and crashes on an ice planet. 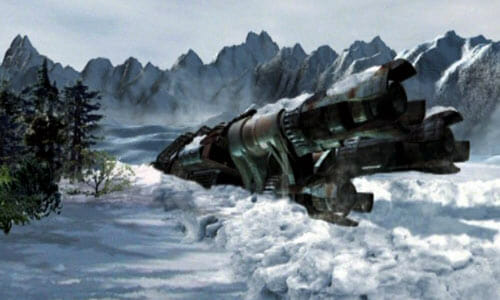 The Eureka Maru crashes on an ice planet

While gathering supplies with the Eureka Maru to help repair Andromeda (still damaged from the previous episode), Hunt, Beka, Tyr, and Rev Bem find themselves attacked by Nietzschean ships. The Maru sustains damage and crashes on an ice planet. 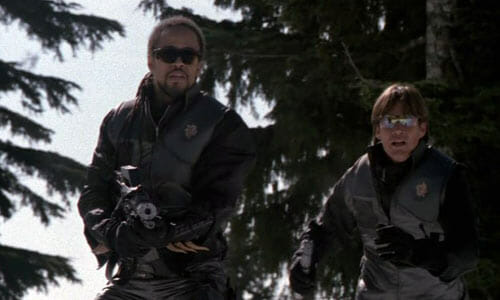 Tyr and Hunt shoot at Nietszcheans

Hunt explores the planet and finds a Nietzschean settlement and gets attacked. Tyr arrives to aid Hunt, and it’s revealed that these Nietzcheans are specifically after Tyr. He once recruited their help to steal Drago Musevni’s bones (in offscreen events preceding the amnesia episode), but he double crossed them and kept the bones for himself.

A Nietzschean projectile strikes nearby, opening a sinkhole that the Maru falls right through. 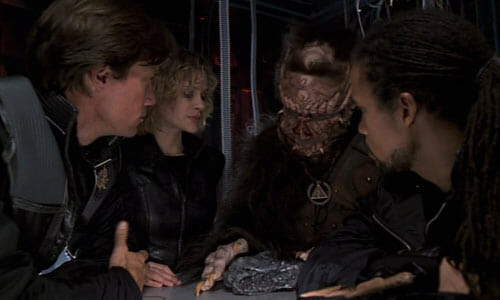 The group on the Maru plan their next move

While all this is going on, Beka helps Rev Bem get through a crisis of faith; similarly on Andromeda, Rommie helps Harper deal with his depression due to having Magog eggs infested in his stomach. 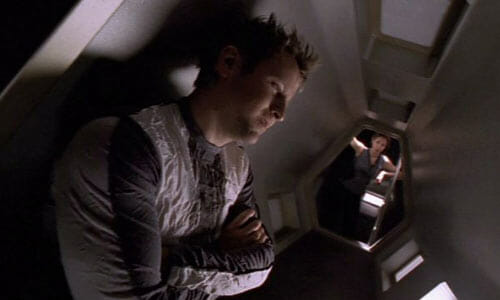 Rommie tries to cheer up Harper

Underground, Hunt and the Maru crew find a system of tunnels and realize they’re on an abandoned mining world. They also find a magnetic accelerator, which they figure out how to use to propel the Maru back into space. 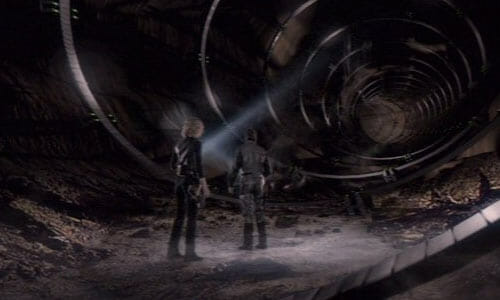 There’s a lot of good continuity going on in this episode: we have a callback to the amnesia episode, plus we see that Andromeda is still recovering from its encounter with the Magog World Ship – the interior is still a mess and littered with Magog bodies. There are also two character-heavy subplots, focusing on Rev Bem and Harper that we definitely need needed.

It’s also a nice change of scenery having an ice planet featured in this episode, even if it’s still obviously Canada. 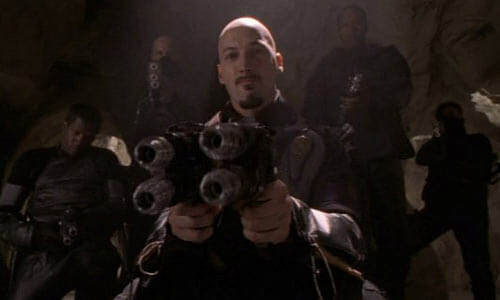 Where this episode falls short is the action-heavy main plot with the Nietzschean confrontation (a little boring), and the Maru’s escape from the planet with the magnetic accelerator (a little convoluted). But the good character moments make these flaws forgivable.