Captain Hunt and Rommie work on a plan to rescue Harper, Tyr, and Rev from the Magog World Ship. 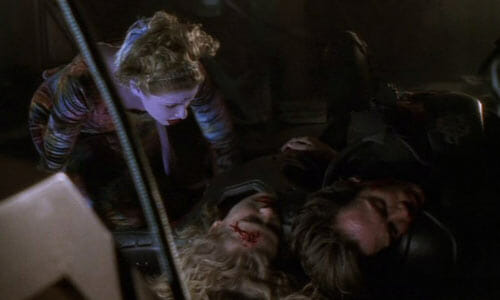 We pick up where we left off in the last episode with Andromeda heavily damaged from an attack by the Magog World Ship. Beka, Hunt, and Trance slowly revive on the bridge, while in a hallway, Rommie pulls the pole out of her torso and starts repairs on herself. Most of the Magog boarding party has left, taking Tyr and Harper with them, and Rev Bem is somewhere on the World Ship falling into his old, animalistic ways.

Captain Hunt plans to take Rommie to the World Ship in the Maru and rescue Harper and Tyr; he leaves Beka in command with strict orders that if he and the others don’t return in three hours, she is to launch a Nova Bomb (a souvenir from episode 3) at the World Ship. 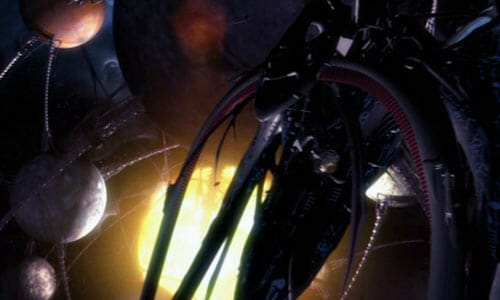 The damaged Andromeda and the World Ship

Back on the World Ship, Rev Bem hangs out with Bloodmist, who formally introduces him to shadow guy AKA The Spirit of the Abyss. All the Magog seem to worship him as a god. Rev starts regaining his conscience and overcomes his savage instincts. 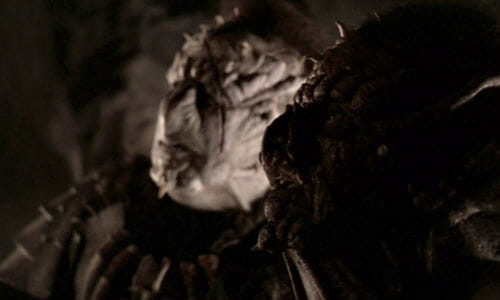 Rev Bem meets the Spirit of the Abyss

We see that Tyr and Harper are still alive but glued to a wall. Harper is depressed and complainy because he and Tyr have been impregnated with Magog eggs and will die as soon as they hatch. Tyr tells him to buck up and stay positive. 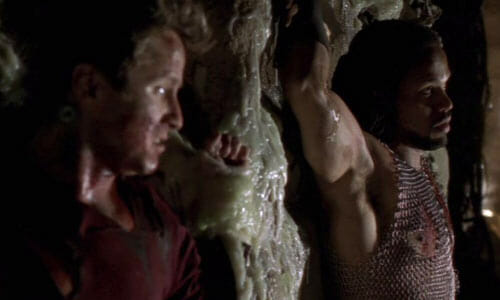 Harper and Tyr, prisoners of the Magog

Not too far away, Hunt and Rommie board the World Ship and start fighting the Magog; three hours quickly pass and Beka fires the Nova bomb. The bomb hits the World Ship but incurs no damage as the Spirit of the Abyss is able to absorb all the energy. 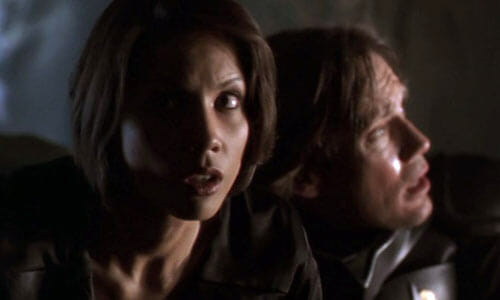 Rommie and Hunt on the World Ship

Tyr and Harper are able to wiggle their way free from their slimy bonds. Bloodmist shows up but Rev kills him, then leads Tyr and Harper out. All our heroes board the Maru and return to Andromeda, which escapes into slipstream. 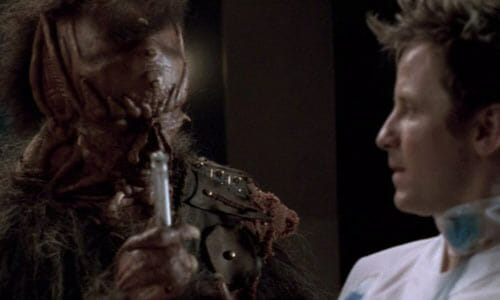 Tyr’s Nietzschean physiology makes it easy for Trance to remove the Magog eggs out of his stomach, but no such luck with Harper. For now, he has to take medication provided by Rev to keep the eggs dormant. Eventually the medication will stop working and the eggs will hatch, but Harper and the others have time to think of a permanent solution.

As for the World Ship, it will take a couple years for it to reach populated worlds. That’s how long Hunt has to establish his New Commonwealth. 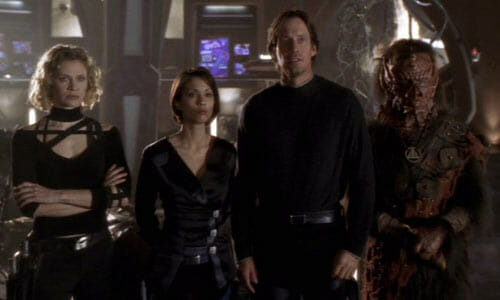 The Andromeda crew has their work cut out for them

This episode was a lot better and more coherent than the previous one, and was actually a bit exciting. We now have a direction for the series; a big bad in the form of the Spirit of the Abyss is out there, and we have extra motivation, and a ticking clock for Hunt to re-establish the Commonwealth.

All the characters had some pretty good scenes and things to do in this episode, and I’m especially liking the Tyr and Harper pairing. I hope to see more scenes of them working together this season.

Speaking of Harper, I think leaving the eggs in him at the end of the episode was a great decision. Hopefully get some character development from him as he deals with his thwarting his impending doom. I’d like to see more of the bitter, tough Harper we caught fleeting glimpses of in season 1. 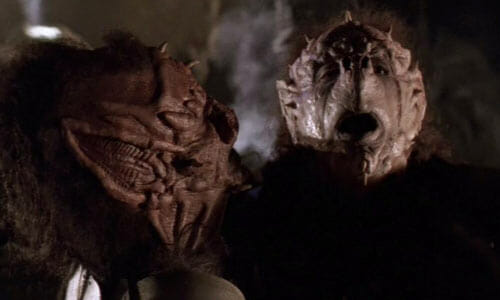 As for Rev Bem – all through the first season, we had constant reminders of his pacifism and strong Wayist beliefs. His brief reversion to his past self and ensuing consequences is another element just ripe for exploration.

The only things keeping this episode from having a higher score were some pacing issues, mostly involving mindless, drama-less action scenes (which we received plenty of in the last episode). I also still don’t buy the Magog as a serious threat. The Spirit of the Abyss and Bloodmist, yes. The rest of the Magog goons we saw this episode, definitely not. 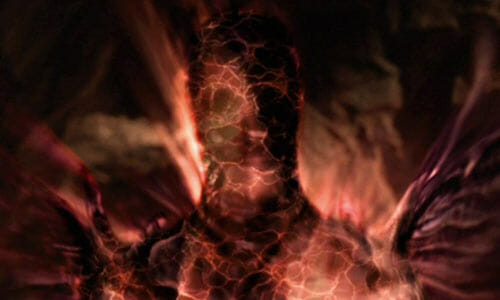 The Spirit of the Abyss

I should also note a major change for the series starting with this episode: new opening credits, complete with new intro music. I really liked the season 1 opening theme, which gave me some Farscape vibes, that we’d be seeing a weird, wacky, but cool science fiction universe. What’s replaced this music? A generic, superheroic march (a variation of the end credit music). Major bummer.