Last year, Star Trek returned to television (well, streaming) for the first time in 12 years in the form of Star Trek: Discovery. Many rejoiced, and of course many were quick to pick it apart. But surely, even in the most flawed of productions, one can still find something they like. Or 21 somethings. 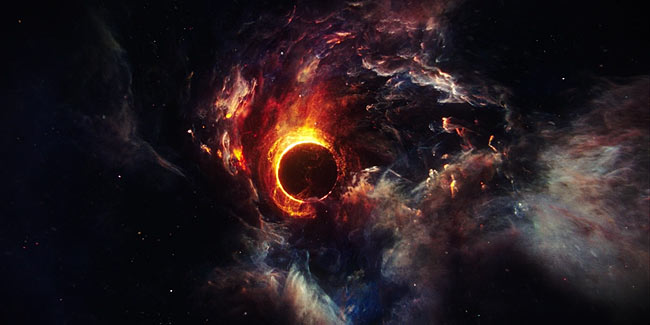 Space stuff! And then it turns into T’Kuvma’s eye. That’s neat! 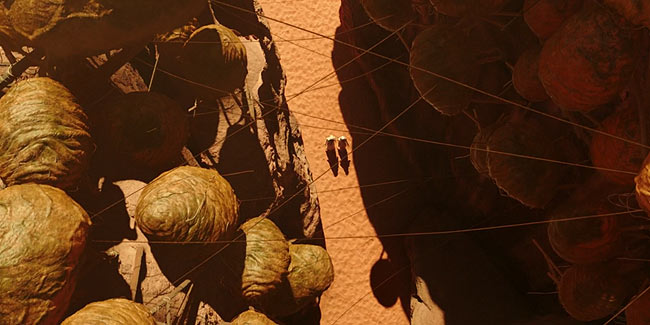 I really, really want to eat them. 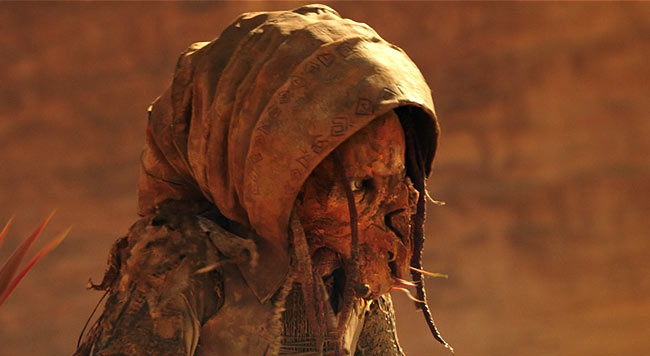 When the first trailer for Discovery made its debut, most of my attention went to this shot of the alien Crepusculan. It looks so alien, like it’s from District 9 or something.

4. First View of the Shenzhou 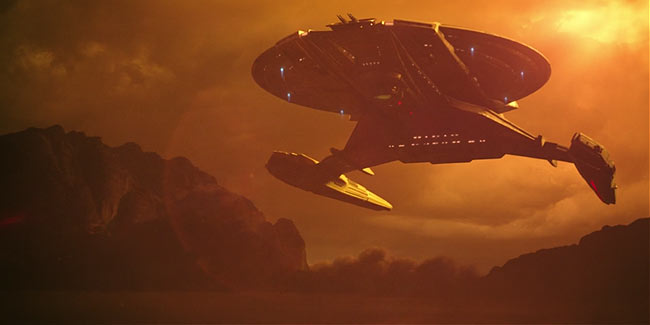 As it breaks through the clouds – beautiful! 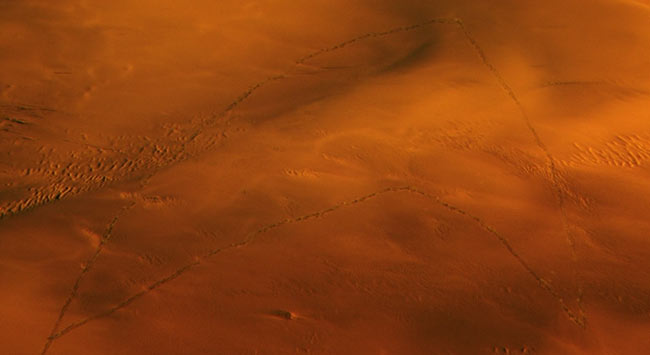 A memorable visual. I flip-flop between liking this and thinking it’s too silly, but today I like it. 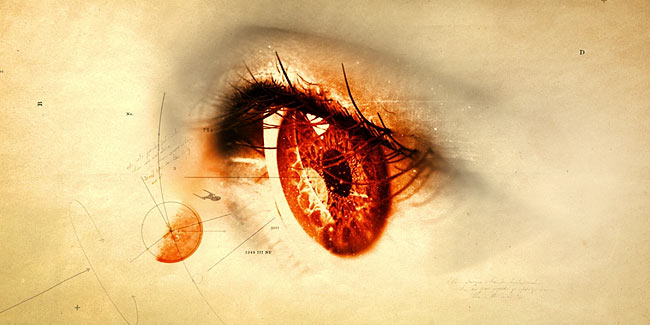 Unlike preceding Trek shows, these credits are very unique, with stunning…even strange imagery. At first my favorite part was the touching hands (à la Michelangelo’s The Creation of Adam), which made me think, “aww” every time I saw it. But now my favorite is the eye. That big-ass eye watching Discovery fly by. So mysterious. 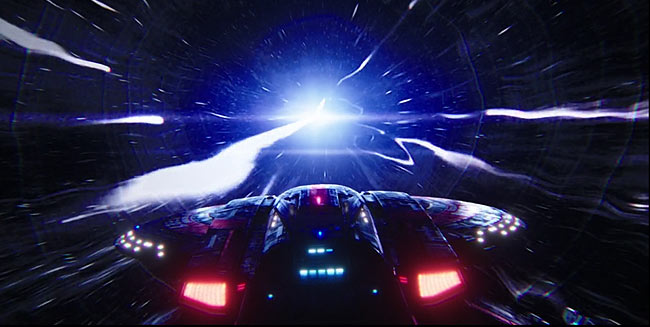 Gregory Smith, who composed music for a couple Deep Space Nine episodes once said that french horns were “the voice of space in the Star Trek universe,” – and Jerry Goldsmith definitely had an affinity for them. Now the first music we hear in Discovery after the opening credits has a french horn and it’s like being reunited with an old friend.

We hear a lot of sound effects from Star Trek: The Next Generation on the bridge of the Shenzhou and later on the Discovery. Anachronistic? Maybe. Star Trek Beyond did the same thing – but know what? I like hearing them again, so it’s fine. 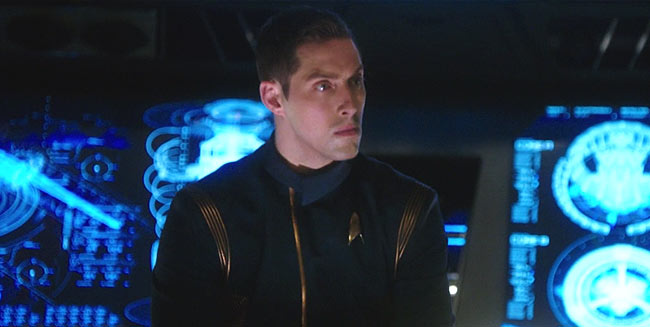 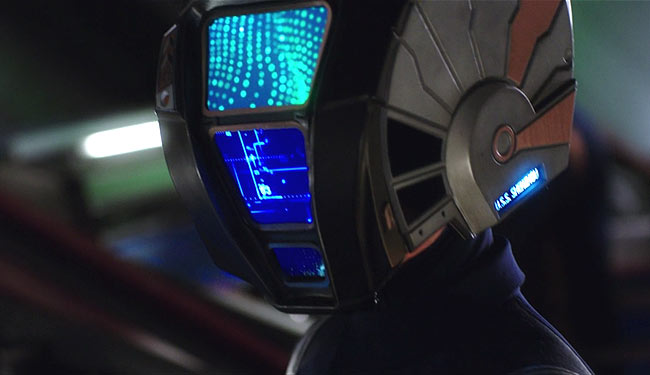 I don’t know why she’s wearing this helmet or what it does exactly, but it’s cool. 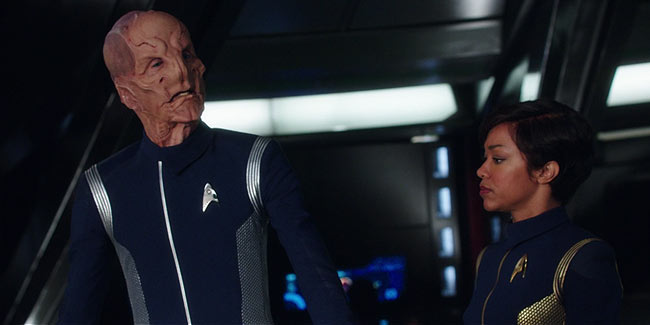 It’s straightforward and even cute, like when Saru pushes her aside so he can give his opinion. 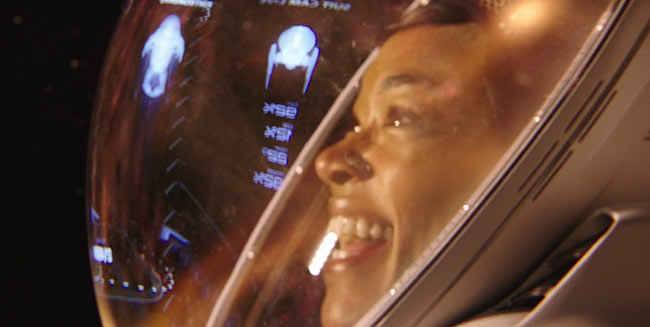 Michael has a pretty rough first season in Discovery, so it’s good (and rare) to see her smile in this episode.

As Michael sees the Shenzhou, we cut far, far away and see her as a tiny dot moving through the silence of space. I think J.J. Abrams did a similar shot in the ’09 Star Trek film. 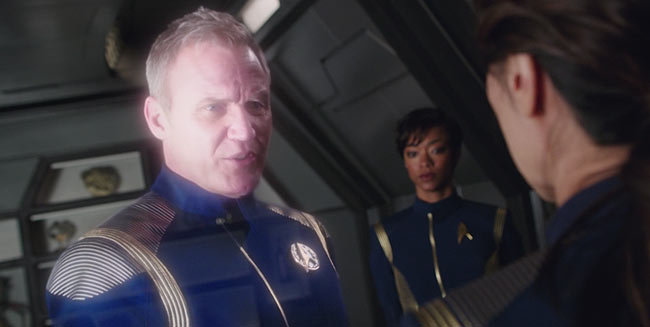 He’s all cool and overconfident, making me think of a modernized version of the archetypal ’50s science fiction hero, like Flash Gordon.

The crew of the Shenzhou’s lost contact with Michael. Where is she? A quick flyby and view of her BROKEN HELMET instantly shows us that all is not well.

It looks whatever Lobot wore in Empire Strikes Back; I think this is the Discovery version of Uhura’s earpiece. The lights blink when it’s in use!

The warm colors contrast all the coolness we see in the rest of the ship…and it looks like the inside of a beehive! 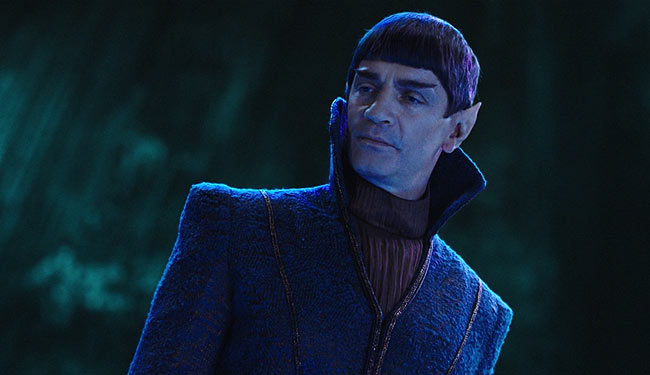 It’s made out of a material my cat would love and it has a popped collar. Going out for a night on the town are we, Sarek? 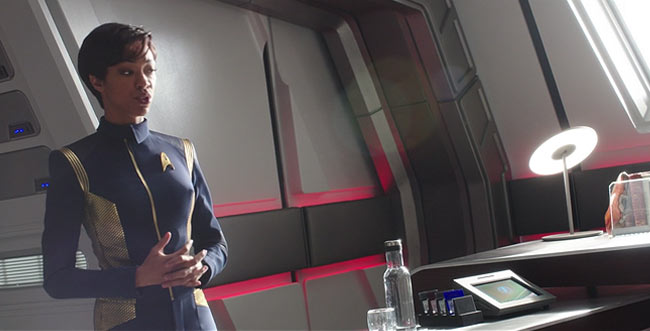 I love it when the environment outside the ship affects how the interior looks; the Amargosa star made everything super orange in Star Trek Generations, Janeway’s ready room always brightened up when Voyager landed on a planet, and now we get a similar effect with the light from the binary stars and the Klingon beacon. 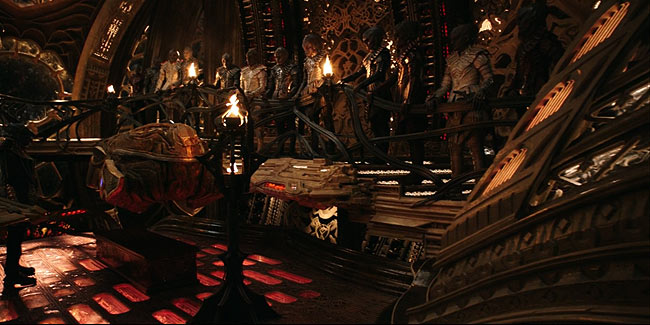 Say what you will about the redesign of the Klingons, but we can all agree the interior of their ship is very impressive. The Gothic church-looking insides caught my interest the second the production art was leaked. Makes me think of Goa’uld ships in Stargate – just a spaceworthy temple lit candles and torches everywhere.